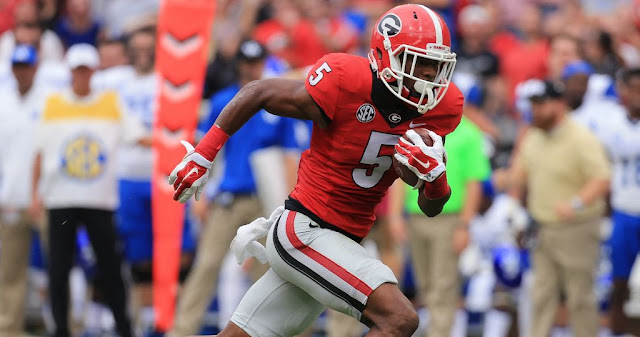 UGA receives the opening kickoff. Stumble for a one yard gain. Penalty. Punt – a 50 yarder by Ramsey. The defense forces a three and out. Marshall slips but has a nice gain on second down. Lambert hits his lineman in the head with a pass. Tight end drops a pass. Fumble – picked up by Godwin and carried into the end zone (above). UGA lead 7-0 after six minutes.


Kentucky brings the kickoff out of the end zone. As usual, bad decision. Tackle at the ten plus a clipping penalty. First down 18 yard run by freshman Horton. Wildcats then convert on third down. They can’t contain Leonard Floyd, who forces a second punt. Two Lambert incompletions, and Kentucky defenders are strutting. Ramsey punts again, and long-snapper Theus recovers the muff. The strutting stops. Sony Michel up the thrice middle. On fourth and inches Marshall Morgan makes it 10-0 with two minutes remaining in the first quarter.


Another 3 & out for the UGA defense. Another UGA penalty on the punt. Brice Ramsey in at QB. No gain by Marshall. High pass almost caught. Malcomb Mitchell slips but catches the pass for a first down, then Michel’s 11 yard run is called. Back. – but he reels off twelve. Then another first down to midfield. Ramsey a tough overthrow on a screen pass. Another good run by Michel. Godwin runs ten yards – backwards. Ramsey punts 42 yards to the 11 yard line.


Interception! But Sanders drops the ball at the seven, and Kentucky recovers. Will this be the difference in the game? Cats drive. A hold isn’t called, but a facemask is. Punt. Completion. A slow developing run is stuffed. Fumble by McKenzie gives Kentucky the ball on the 20. Dropped pass. Stuffed run. Field goal. 10-3 Dawgs.


Kentucky recovers the pooch kick to the right – but was offsides on the far left. Lambert in at QB. Pressured, he short-hops a pass. Then a 24 yard completion to Mitchell with 20 seconds remaining. Douglass to the 25 with 16 seconds. Lambert scrambles and is tackled with ten seconds left. Morgan’s 38 yard attempt sails left. Should Richt have called list last timeout with ten seconds on the clock and thrown into the end zone? Probably too risky, but in hindsight…


UNC is pulling away from Duke. Gators trail Vandy at the half.


Second helf: Cats fail to convert on fourth and two. Lambert still the QB. Dawgs drive 50 yards, with Michel carrying the last two. 17-3 Dawgs nine minutes into the half.


Another key penalty on lineman meadows, and Kentucky punts. Good return. Completion to Mitchell, long run Michel and a 12 yard screen to Marshall, who reaches the ball across the pylon to make it 24-3 with 2:33 left in the third.


Sack. Punt. McKenzie runs for ten. Michel has 134 yards rushing in the first three quarters. With success on the ground, the Dawgs work on the pass. Pressured, Lambert throws two straight incompletions. At least he wasn’t sacked. Ramsey punts into the end zone. Towles tosses for 24. Another first down. But Dominique Sanders intercepts a tipped pass. This time he holds onto the ball and returns it to the 38. Michel runs for 25, but Godwin takes too much time in the Wild Dawg formation. Marshall Morgan makes it 27-3 with 8:47 remaining.