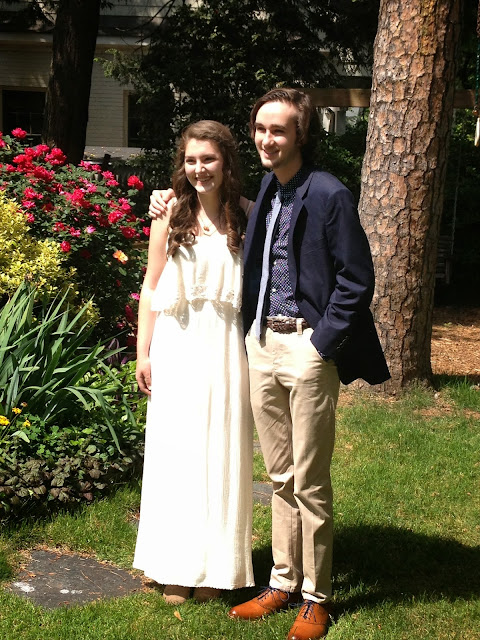 Sunday afternoon I ate some soup then cleaned out, washed, and armor-alled the CRV. Drove back C and M back down to Buckhead to pick up M’s prom date Massie, whom M knew from Passion Students. A very nice girl.

Snapped some pictures then drove up to northern Roswell past the super Target to where M’s classmates where gathering for prom. More pictures and talking with parents. No fashion disasters like in Chattanooga but there were a couple of neon orange dresses that looked like they were from WalMart. 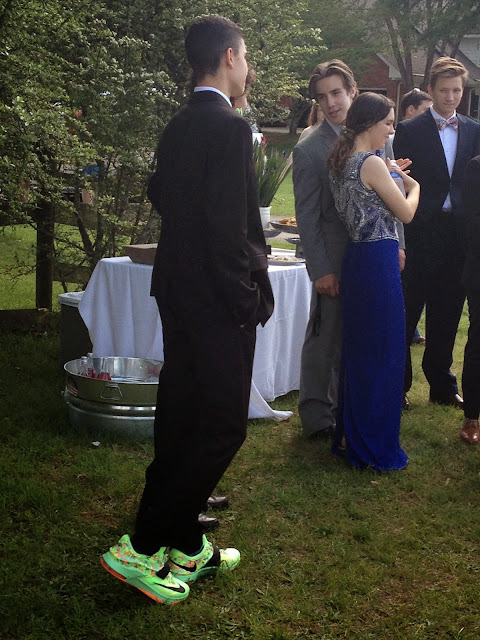 One boy wore a tux and yellow $150.00 Kevin Durant Nikes – and a matching bowtie. 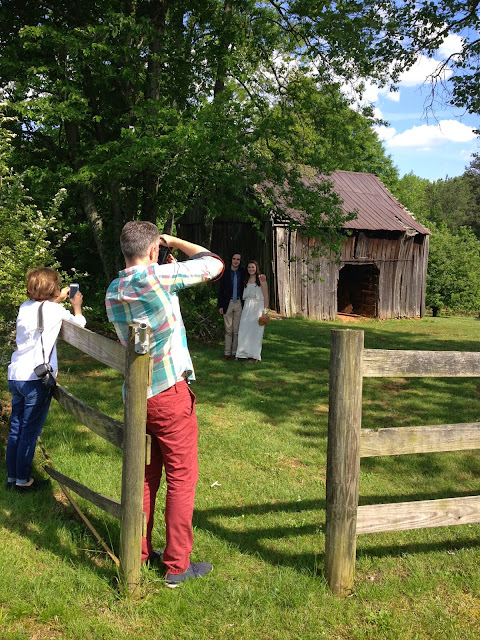 Several boys wore shoes like the new ones M wore, so I knew he’d made a good choice. 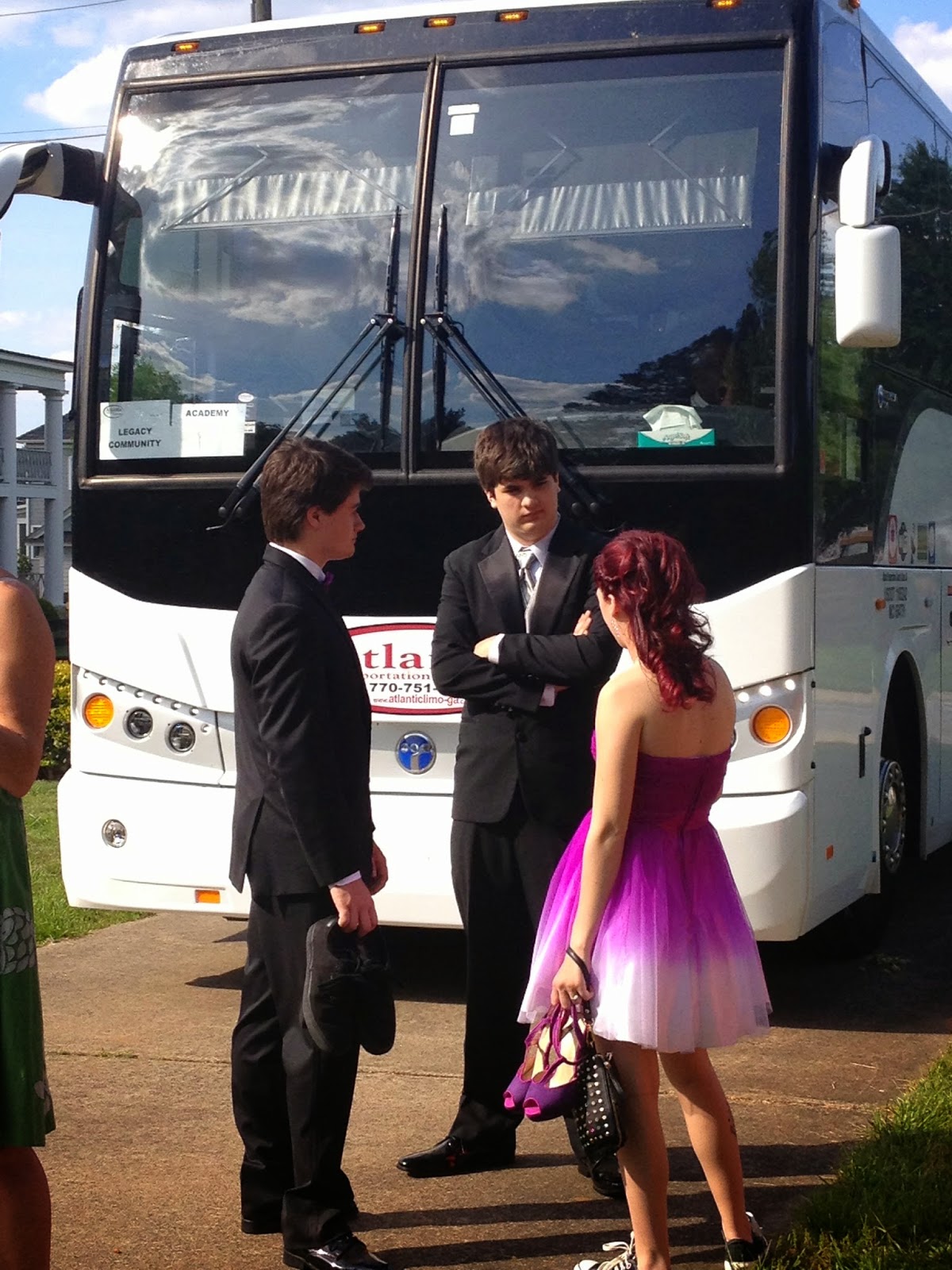 Pointing, I told a group of girls that if they needed a Kleenex while on the bus that the bus driver had a box. 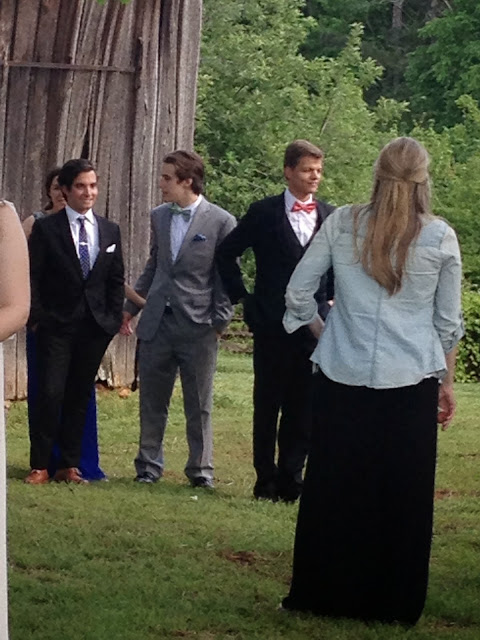 One senior looks set for a career as a TV news anchorman.

The bus took the kids down to the JCT Kitchen at the Westside Market (near Taqueria del Sol) for dinner and the prom. Later Ceil and Anna went down to pick up M and his date. M had a great time.

Will says he might get to play baseball this summer with Zack, MC’s sister’s boyfriend.

Clogs are cool but I have never found a pair I like. Ceil wears clogs all the time. Jim Kiick of the Dolphins used to be my favorite football player and I remember reading that he wore clogs. Nowadays men wear clogs all the time. I do have some slip on Merrell camp shoes, and some Crocs that I do yardwork and wash cars in. This week I found a pair of black leather spikeless adidas golf shoes similar to the ECCO golf shoes worn by Fred Couples. Very comfortable. I wore them to work both Wednesday and Thursday. Friday I broke out my red shoes.

I just learned that while Louie Gigilo was a student at Georgia State in the late 70’s / early 80’s we worked as a clubhouse boy at the Omni in the visitor’s locker room.

Worked past 6:30 Thursday night. Ceil was out with M shopping for prom, so I picked up a Chickfila sandwich on the way home. M got a new suit (that was later returned to the store). They got home at 8 pm with PaPaJohns pizza. Watched some of the Braves, some of the NFL Draft, and then Ceil turned it to the movie 27 Dresses. I kept one eye on the movie while reading and checking email and keeping tabs on the Braves game. Went to bed shortly after ten.

When the NFL Draft came on ESPN and since Tampa had the first pick they showed a video of all the first overall picks they had taken. Many were flops and others didn’t turn out well for them (Bo Jackson, Steve Young, Doug Williams, Vinnie Testaverde). Jameis Winston served crab legs at his draft party, basically thumbing his nose at the authorities. After a series of run-ins with the law and having suffered several minor injuries throughout his career that have hampered his mobility, for a team with a history of futility and making bad draft picks to pick Winston number one overall seems like another bad decision to me. Some compare Marcus Mariota to Aaron Rogers, but even if Mariota wasn’t worth picking number one overall, the Bucs could’ve traded the pick or picked Vic Beasley or someone else.