Week ten football recap. But first a work on the targeting penalty, which I am in favor of. What gets me is they put in that penalty to save the players lives, so they’d be able to live long lives without their brain going away. The penalty was for their own protection.
Then the penalty is called and the crowd boos. They don’t care about the well-being of their own player. Then the player gets thrown out of the game for breaking the rules and endangering the life of the player he hit, and he runs off the field waving his arms like he’s a hero or something. Usually his team is losing by a big score at the time.
And the players aren’t learning. On Saturday targeting was called against Clemson, Louisville, Kentucky, and LSU. Just about every game I watch. That said with the breakneck (pun not intended) speed at which these collisions occur, its understandable to see how it happens. But you can’t help your team when you’re thrown out of the game. Doesn’t seem like the players care. All they want is to play in the NFL. 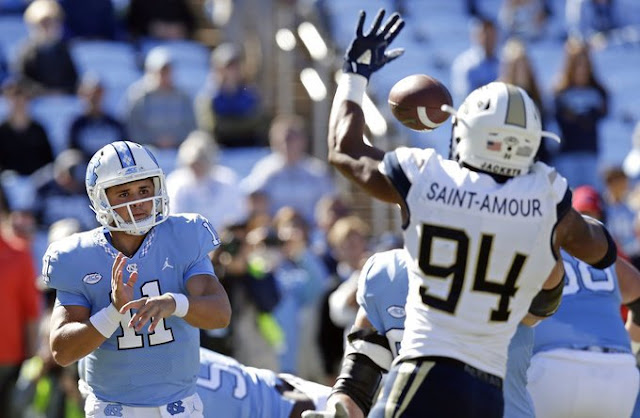 Tech struggled at times, but still was able to beat UNC in Chapel Hill. Oliver has another good game, though he lost control of the ball a couple of times – seemingly twice on fourth down plays.  His touchdown pass was wobbly, but his run fake before the throw was good enough to get his receiver into the open.
Now the Jackets must beat Miami or Virginia to become bowl eligible. Miami has struggled recently, but Tech has to play mistake free football if they want to win. Defender Swilling is a lot like his dad – a lot of hype but not much results. 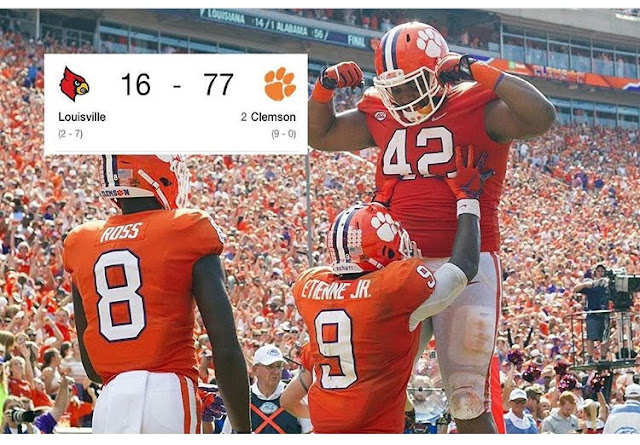 Clemson played their usual good game. Louisville quit again. You rarely hear an announcer get down on a team like he did the Cardinals. Time after time Clemson would hand the ball off and the back was off to the races. 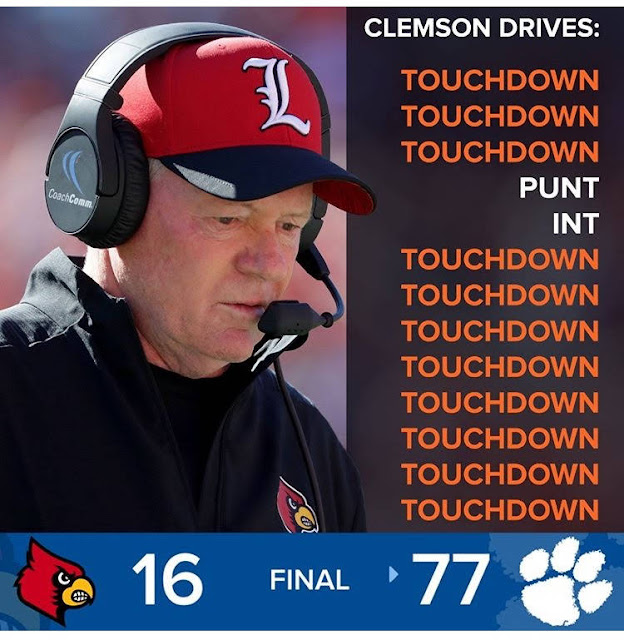 The Tigers third string was dominating on both sides of the ball. Dabo’s son scored his first touchdown (below). 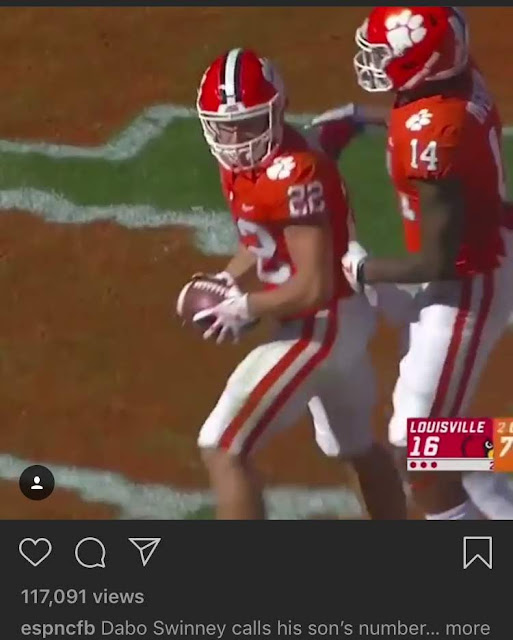 This Saturday ESPN College Gameday travels north for the Clemson/Boston College game. BC is playing well, but the Tigers should be up to the task. With a chance to clinch their division, Clemson will break out their championship pants (the orange ones). 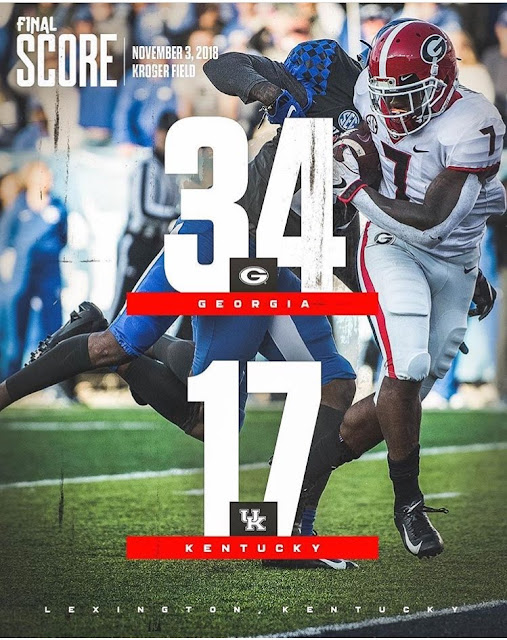 The GA/KY game was dubbed the biggest in Lexington in years. At 7-1 the Wildcats had broken into the top ten. Kentucky fans thought their running back Snell was Heisman material. They broke out their big bad black jerseys and blue pants. Then the game started and it all came crumbling down. The Cats quickly lost their cool. A key defensive player was lost to targeting, and a key offensive lineman kicked out for pushing a referee – just after Kentucky had scored a touchdown. 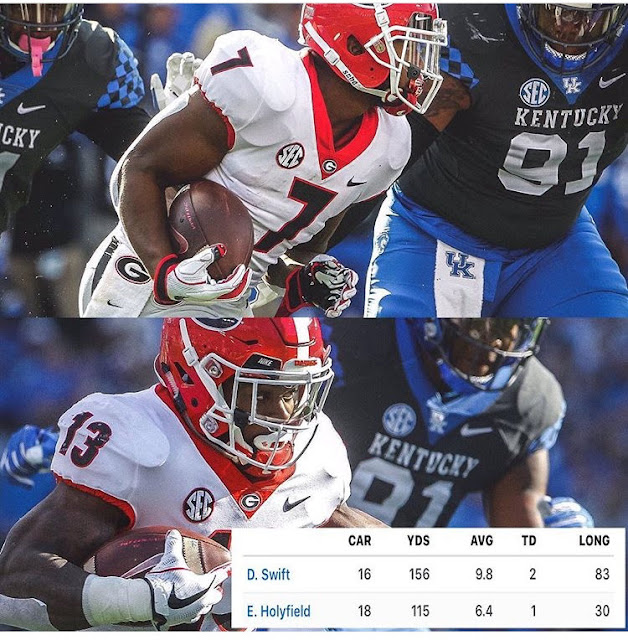 Snell was held under 80 yards rushing. Both Holyfield and Swift gained over one hundred yards. 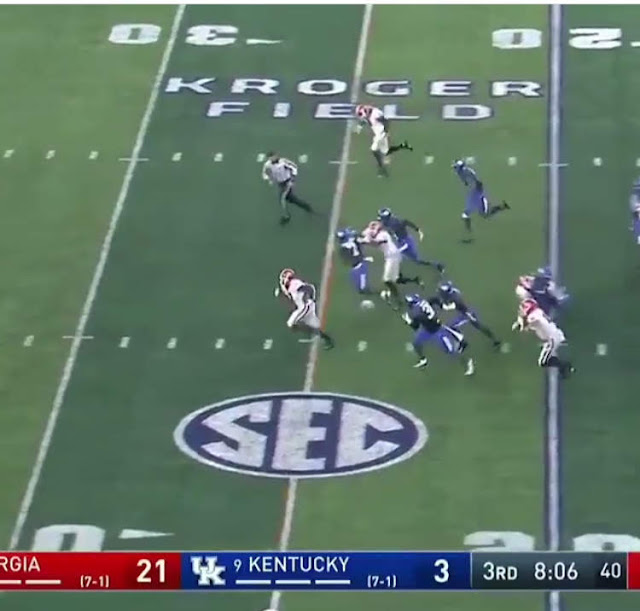 Jake Fromm had another good game, particularly on third down.

Freshman Justin Fields saw more playing time (ok, six plays), including in a couple of key third down situations. Expect to see more of Fields in the final three regular season games. They do need to let him throw the ball, though he is too quick to tuck and run. Of course 680’s Steak Shapiro had to run the topic into the ground. 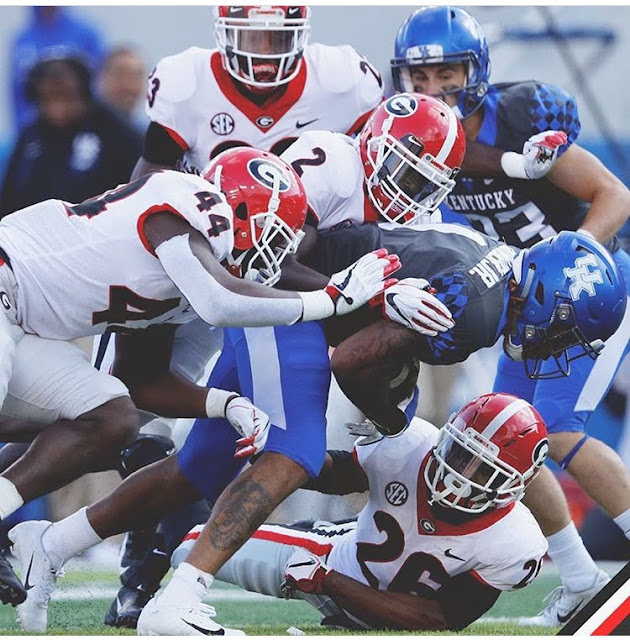 More poor play-calling down in the red zone, infuriating Kirby Smart. The Dawgs clinched the SEC Eastern Division Championship, but they have a ways to go to compete with SEC West champ Alabama. Old Gary Danielson said the way to beat Bama is to run the ball. Let’s hope UGA OC Jim Cheney gets that message. Cheney will run the ball on one possession, then regardless of the result will pass the next time they get the ball. Of course, Georgia must first dispose of rival Auburn Saturday night between the hedges. 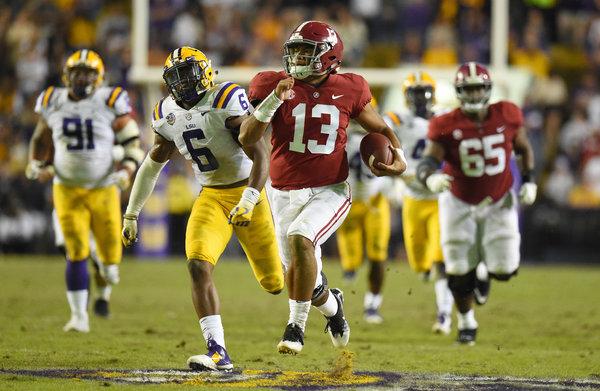 LSU came into the game vowing to shut down Tua and the Tide. They provided decent competition, but Bama rolled anyway. Saban needs to find a way to rest Tua. Backup Jalen Hurts has yet to recover from surgery. But this Saturday Mississippi State will be bringing their A game. 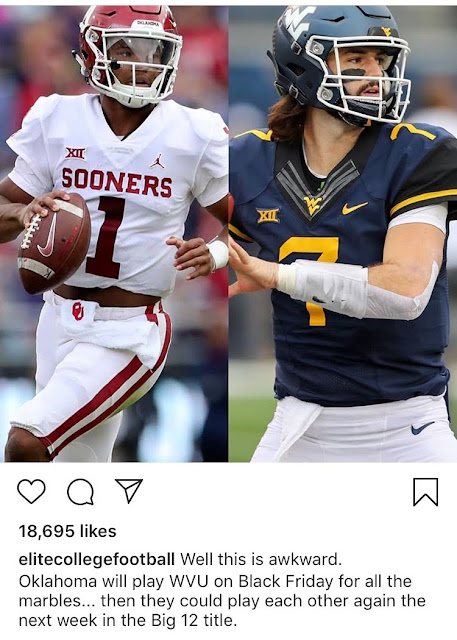 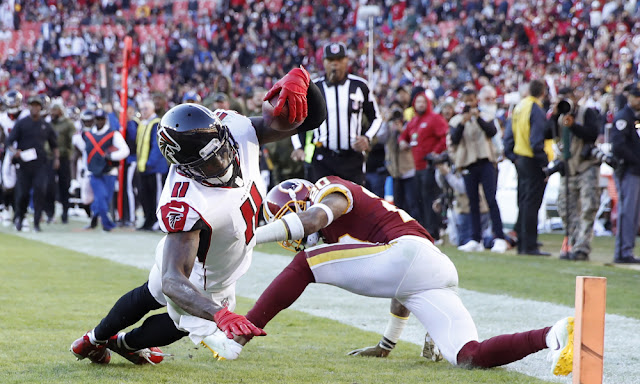 The Falcons have turned things around, beating the Redskins in Washington. Julio Jones finally caught his first touchdown pass in almost a year. Hard to score when teams are double and triple-teaming you, or committing pass interference to save a touchdown.