All college apparel is not created equal. There’s a reason why few good Georgia Tech items can be found: their followers just don’t buy it. While students will grab all the free T-shirts they can, Tech alumni seem quite happy with the odd rugby shirt or stocking cap they’ve had since their college days. It still fits, and is only worn a few times a year – so why buy something new every year? That’s not logical. Confession: I am guilty of letting my same Tech stuff hang in the closet for years (most bought in second-hand thrift stores): navy Russell Athletics jacket and gold GT cap with the Russell logo. In 2013 Reid gave me a nice GT T-shirt that I wore at the beach. Back in the late 80’s I bought a great looking white GT fitted cap with a gold bill. It’s a little snug but still nice.

But over in Athens and Auburn and Tuscaloosa and Clemson many fans have a different mentality: consumption. They want the latest team logo fashions: oxford cloth buttondowns, Columbia PFG shirts, boxer shorts, different colored caps, belts, golf shirts, golf jackets, golf balls, Christmas ornaments, bumper stickers, window stickers – I could go on and on. Alabama has houndstooth hats. Tennessee bluetick hounds. Autumn Saturdays are indeed fall fashion shows – no fan in his right mind wants to be caught without the latest outfit or accessory.
Last year a sports blogger wondered why such devoted college football fans in the Southeast didn’t flock to games in team logo T-shirts. How could he not know that southeastern fans tailgate in much more expensive apparel than mere T-shirts? Obviously not much of a fan – perhaps a northeasterner. Coeds go to games in dresses and boots – no jeans and T-shirts for them. Some fans wear expensive jerseys, but those are mainly worn by young boys. My favorite are the Bama fans wearing number 44 jerseys with GUMP on the back.

There are exceptions. A few holdout UGA and Clemson and Auburn fans didn’t get the memo. They’ve saved their rugby shirts and worn out snapback mesh caps (which came BACK into style) and wear them with bluejean shorts or overalls. And there are one or two fashionable Tech fans (in addition to yours truly, of course).

When Penn State holds a white out game 99% of the fans wear solid white. When Georgia Tech announces a whiteout alumni sound like they heard Chinese. “Our color is gold!” they say – and refuse to participate. In so many areas Tech people just don’t get it. 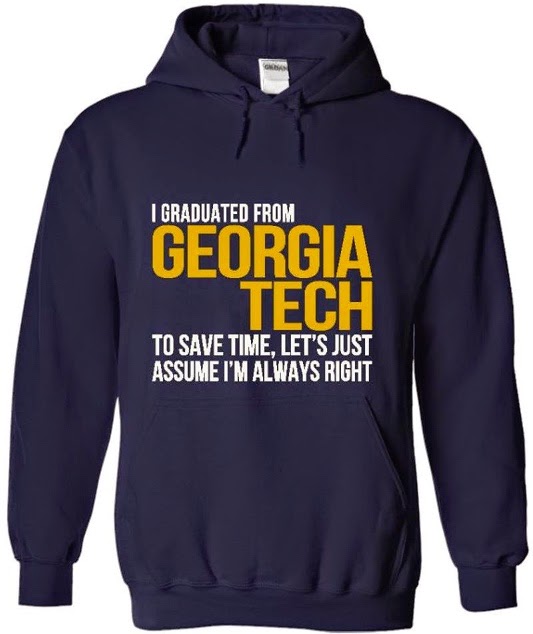 Not sure if the shillsters sell this same crap for other schools, but I am offended by this sweatshirt being sold on Facebook - though it does accurately capture the better than you mentality held by many Tech students and fans. 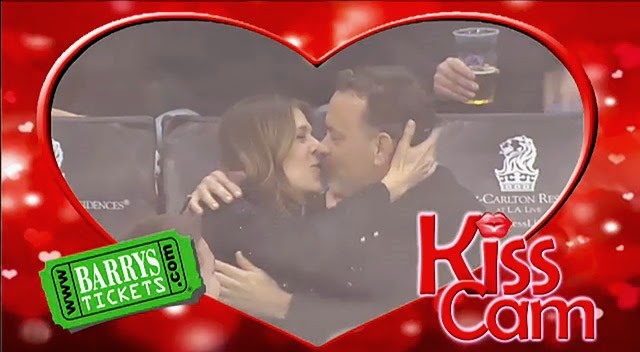 Also not equal: Kiss Cams. At Braves and Hawks and UGA and Auburn games the students and fans generally know what is expected when they’ve been captured by the kiss cam. Once the great thespian Tom Hanks and his wife Rita Wilson were caught on the cam at a LA Kings game, and they dutifully obliged (above). Usually even casual friends will exchange a peck on the lips or cheek in the spirit of the crowd.

Not so at Georgia Tech. Students will hoot and holler when the obligatory elderly couple shows up on the Kiss Cam. Many times older fans aren’t even aware of what’s happening on the jumbotron. They’re watching the teams huddle on the bench or chatting or reading the program (how old school). Other old Techsters are checking their smart phones and don’t notice. But those oldies who do notice usually don’t mind exchanging a quick kiss, to the delight of the crowd.

But turn the camera on two students and the tension can be cut with a knife. The kids have no idea what to do. Awkward city. As the camera lingers it just gets worse – like an episode of The Big Bang Theory. After an eternity the camera mercifully moves on (or the game resumes).

Yet when the Tech band launches into Sonny & Cher’s “When You Say Love” (aka the Budweiser song) those same awkward students transform into worldly partiers, bobbing up and down and shouting GO GEORGIA TECH – WHEN YOU SAY BUDWEISER YOU’VE SAID IT ALL! Tech fans who’ve sat the entire game and not cheered a lick suddenly come alive at the sound of dear beloved Budweiser. Party animals are they.

Same with the recent addendum to Tech’s longtime fight song “Up With the White and Gold” which concludes with the GO JACKETS! cheer. Seems as though hard partying Tech fans have now added GO! FIGHT! WIN! – followed but some obscene command so rude I shut it out of my mind. Party animals are they. It’s as if they’re proud to be more obscene than anyone else. At the Tech Clemson game this year a young alumni woman stood up and screamed the GO FIGHT WIN nonsense. Everyone around her looked at her like she was from another planet, but she was damn proud.

And people wonder why I’m not a big Tech fan.

Email ThisBlogThis!Share to TwitterShare to FacebookShare to Pinterest
Labels: sports