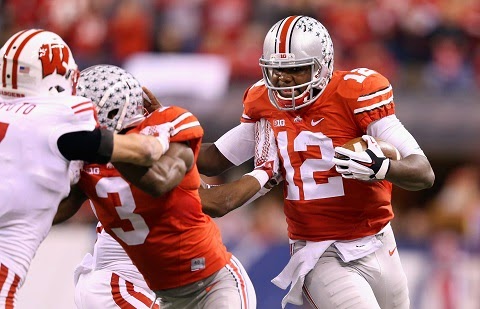 Question: In the Sugar Bowl the third string Ohio State QB Cardale Jones was making his second start of the season – yet one side of his helmet was completely FULL of buckeye merit stickers. How did he earn so many stickers in such limited playing time?

See Jones above in his first start against Wisconsin in the Big 10 title game, then below with even more stickers in the Sugar Bowl.

Answer: players can earn stickers just sitting on the bench! In fact a player could spend the season in the hospital then dress out for the bowl game with a helmet containing merit stickers. Sounds like a sham to me. 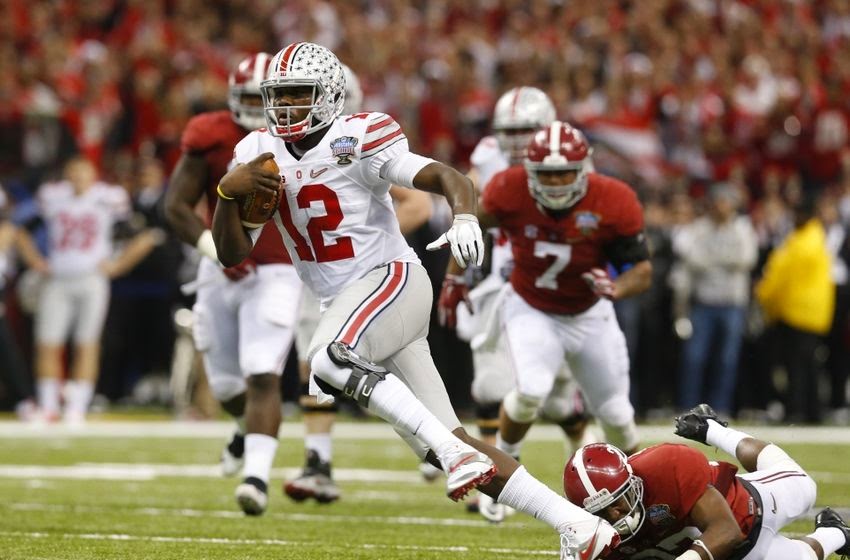 COWBOYS/LIONS: Colin Cowherd may have a point. I missed most all of the second half so I was taking the word of the talking heads. The officials have a tough job and have to be careful and judicious. Many said Dez Bryant should have been penalized for illegally (1) coming off the bench (2) without a helmet (3) to argue. Not sure how often that penalty is called, like it is in the NBA playoffs. Is Bryant even a team captain? The NFL usually doesn’t allow such anarchy. Will be interesting to see if Bryant is fined for his actions. Still thought the NFL should’ve upheld Suh’s one game suspension for twice stepping on Aaron Rodgers.

I do like the Lions (Stafford and Calvin Johnson – NOT Suh. Over the years I have liked the Cowboys but not this incarnation. Not a huge fan of Jerry Jones and Tony Romo and especially Dez Bryant. They are a hot team, so you have to give them that. The Lions had a tough task beating Dallas. They did well in the first half but couldn’t hang on. 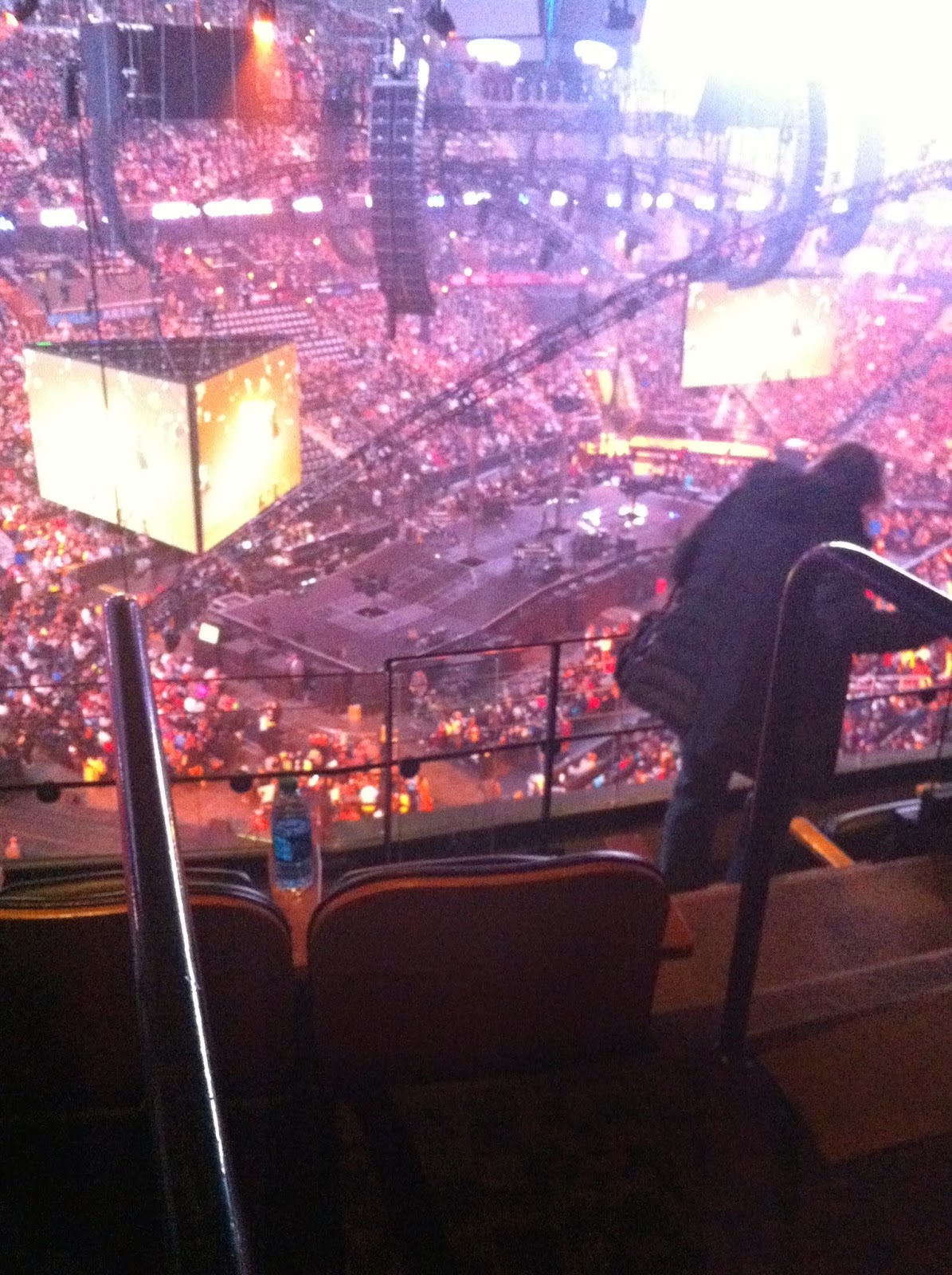 WEEKEND: Saturday night M and I drove down to pick up Ceil after midnight (the view from her box above). Didn’t get to bed until after 1:30 am. Bad rain on the drive down, but it let up by the time we got to the CNN Center. Sunday morning I dropped off C at 9:30. Took a different route home on the wet roads downtown. Was on Spring Street looking at the interstate signs when I realized I was about to run a red light. There were no cars in the intersection but I slammed on brakes and slid through the intersection even though my tires were new.

Drove up to Perimeter Mall after stopping for a Hardees omelet biscuit. Noticed the REI parking lot was full and a line wrapped around the building. It was 10 am and the store had just opened. I was going into the store next door but decided to go in REI for their garage sale – up to 70% off on returned items. Huge crowd. I poked around a little but didn’t get anything. Saw five people I knew – brothers Andrew and Nathan and sisters Alyx and Addie and their dad Steve. Back home I folded more laundry. Will and MC arrived and started packing Will’s Jeep. 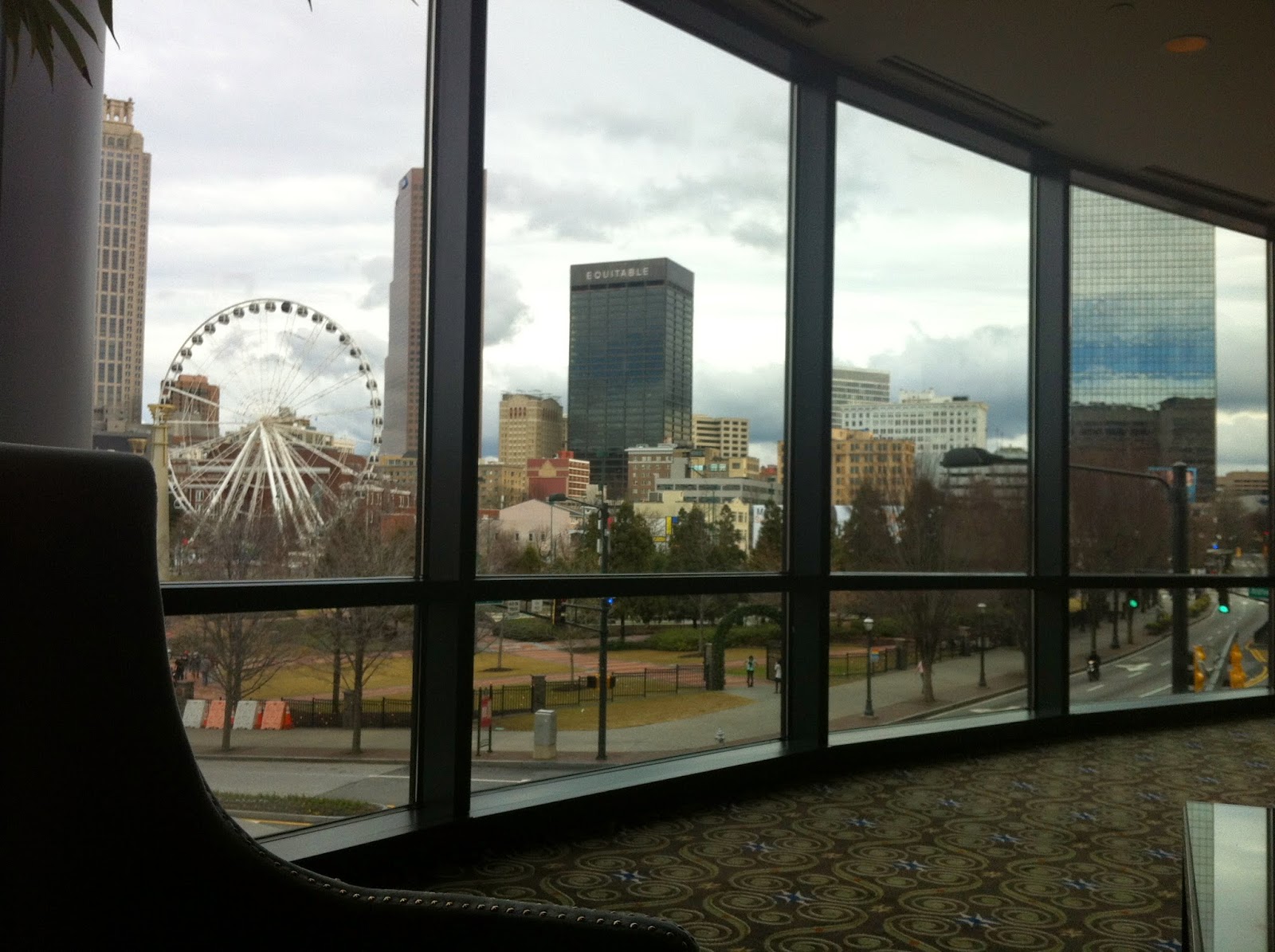 At 2:30 I left with Matthew, dropping him off downtown and picking up Ceil (her view while waiting on me above). Stopped by Trader Joes on the way home. Watched some of the Cowboys Lions game, homing Detroit could hang on to win. Anna came home and went to bed – she had a total of six hours sleep the previous two night. At 6:30 I made my seventh round trip of the weekend downtown to pick up Matthew. Back home I watched the discussion of the bad calls benefitting the Cowboys. W and MC had gone out to eat and were now watching Jack Reicher. M wanted to watch We Bought a Zoo. Ceil was watching Dontown Abbey on the computer. I went to bed early, but M and the dog kept waking me up. Finally went down and slept on the couch.

This morning W drove to Athens for class. MC went back to Cartersville. M and Anna had school as well.