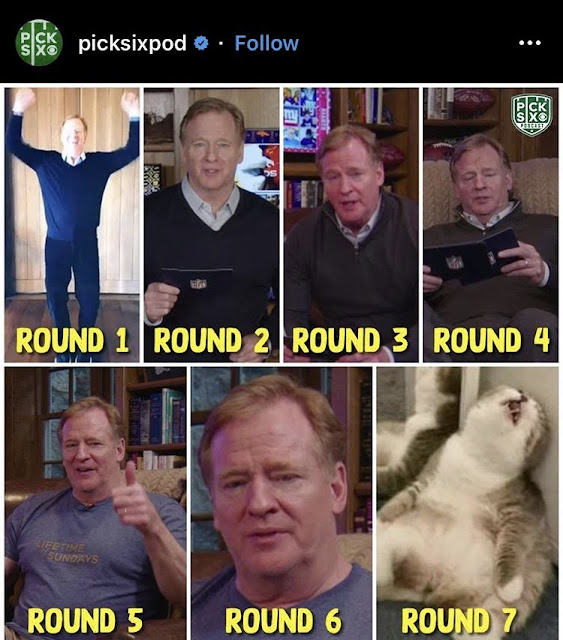 Glad the draft didn't go another round. Goodell might've had his shirt off by the end.

NFL is getting rave reviews for its draft, giving America a live “sporting” event to watch. Better than the usual draft with huge players in $3,000.00 suits coming onstage like a beauty pageant.  Instead players were surrounded by loved ones. Coaches and GMs were out of their element, working from home like the rest of America. The whole thing gave a glimpse of the human side of the draft, with so many players having their lifelong dreams being realized.
Teams would rather have a QB with a big arm but can't read defenses or call audibles. We'll see who lasts and how don't. 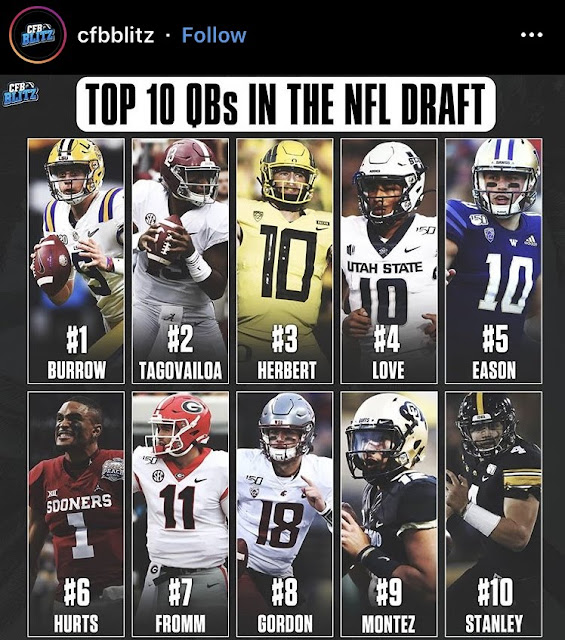 Big news: a crew was out working on the road just up the street. Need to call the water department – our street light is out.
Sunday: watched Passion City Church service. As usual C went to the grocery store. We went out on a 2-1/2 mile walk around the neighborhood. Later I mowed the grass. Windy so I had plenty of sweetgum balls to kick off the driveway. Did my hinge health exercises as well. In all I got in almost six miles 12000 steps. Left heel is sore. Didn’t help that I wore flat sneakers with little cushioning on Saturday. But they looked good.
Sunday afternoon I had leftover soup for a late lunch. Skipped supper but ate leftover meatballs later on. Still plenty of leftovers in the fridge: baked chicken, sweet potatoes, black beans, rice. C says she’s going to make chicken salad.
Watched Who Wants to be a Millionaire. Also Romancing the Stone, a great movie. Later Ceil’s shows on Hallmark Channel. After that two episodes of Zoey’s Extraordinary Playlist. Stayed up late working on some focus group stuff. This morning Ceil fixed me an eggy boy. 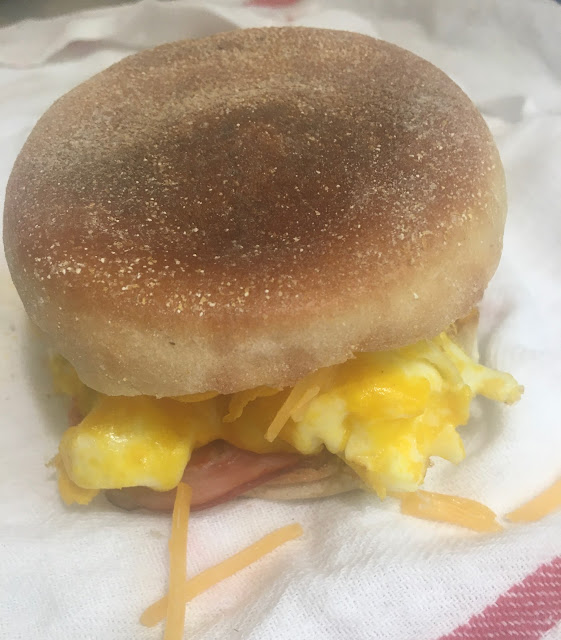 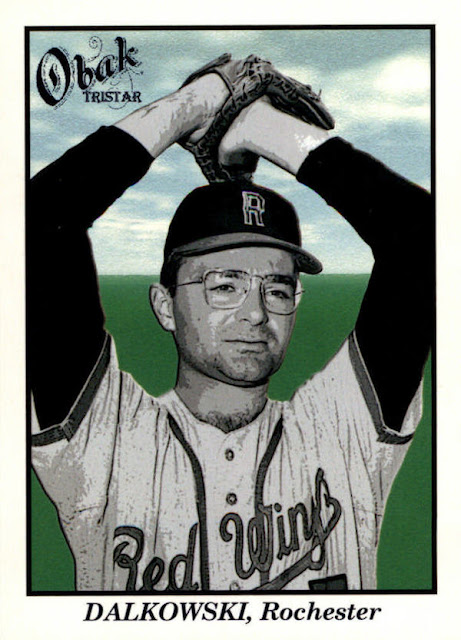 RIP STEVE DALKOWSKI  [Bio] whom the “Bull Durham” character Ebbie Calvin LaLoosh said to be based. We know that character better as Nuke LaLoosh as he earned his nickname during the film. Dalkowski also had blazing speed, but erratic ability to hit the strike zone. His fastball was nicknamed “White Lightening” and was believed by some baseball insiders to be as fast a 110 miles per hour. No accurate radar guns were in existence in Dalkowski’s time, but very few people who saw him pitch believe that his fastball was anything less than 100 mph. He was on the Topps 1963 Rookies card, but never made it to the majors. Rookie card #496 in the 1963 set.

In the minors, he played nine seasons, laboring for teams in levels D (short-season), D, C, B, A, AA, and AAA. Fourteen of the sixteen teams he pitched for in the minors were part of the Baltimore Orioles farm system. Ted Williams stepped in against him in a batting practice for one pitch and said he didn’t even see the ball. Adding to the anxiety of batters who faced him, he wore thick prescription glasses. A few years ago Sports Illustrated published an article about Dalkowski. 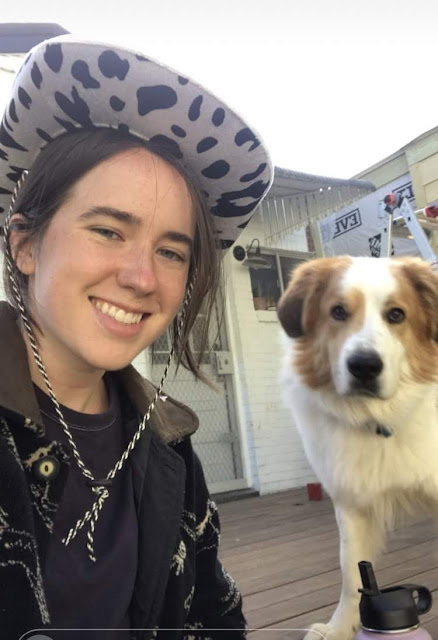 Pet peeve: people post an article on social media, and ask a question - that is answered in the article! If someone comments with an answer, are they going to listen - or say what they think? Then why did they ask the question? 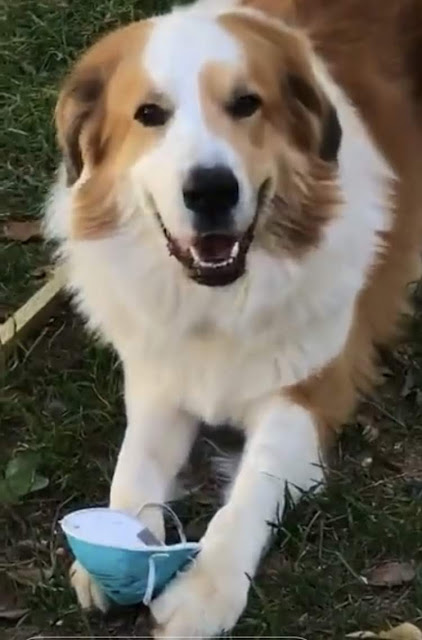 Ramblings on the virus: okay everyone has had their fun with the tattoo parlors and bowling alley jokes. Same with drinking household disinfectant. Enough already. It’s not funny any more. It’s gone the way of Hump Day jokes. If people can buy clothes at WalMart, why can’t small businesses reopen? People are going to grocery stores. We’re going to have a bunch of shuttered businesses if they can’t reopen soon. Sure there will be a second spike. People are getting careless and going out. Really no one knows for sure. A bunch of unknowns. Lots of people not staying home. I’m going to stay home as much as possible. Never went out much anyway. Making a point to not go visit my 89 year-old father, who is all alone. There’s always the chance I could pass something I picked up from C or M or someone at Kroger the one time I went out all month.
Another soapbox: some people these days just don’t know how to communicate with other people.  How to get along with others. Put others first. Have I said this before? Not just young people who have their eyes glued to their phones all day. Also old people who have their eyes glued to their phones all day. People who before the virus didn’t have jobs where every day had to give and take with customers and suppliers and coworkers of various levels, who had to learn how to read people and listen to what they were saying. Heck, to actually think before saying something, or sending something out in writing that can never be taken back. Sure we all have varying degrees of aptitudes. I’m certainly not the greatest people person in the world. I’ll never win the most outgoing award, but still I need to be able to develop relationships and get along with other people.
With this world getting all the more technical, things will get even harder for us older people. We used to laugh at old people with VCRs blinking 1200. Now I have to careful not to reply to the wrong text or email – not just to not look foolish, but also to respect the time and privacy of others. Some people don’t know how to pick their battles. They’re more concerned with tiny hundred dollar battles instead of the multi-thousand dollar war. Why can't everyone be like Mary-Clayton? 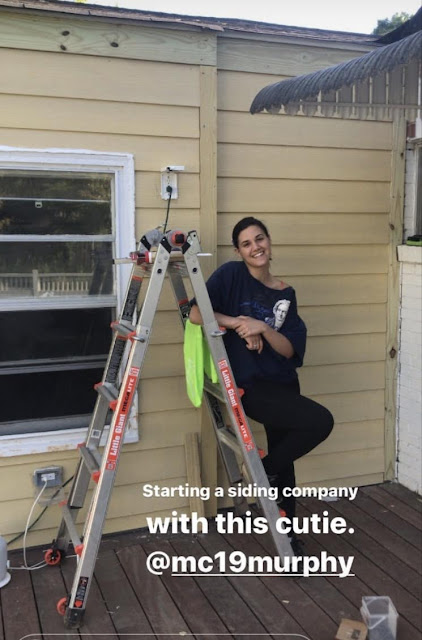