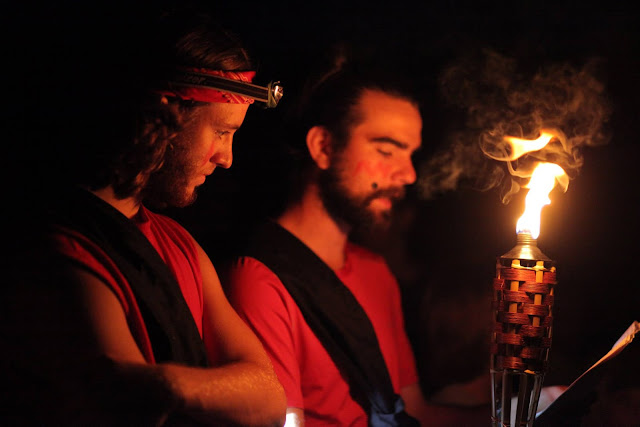 Tuesday morning Ceil and I went for a walk on the beach. She loves to look for shells. That is one thing better about the Atlantic: More seashells. Matthew came out and we went out in the waves with Anna and her cousins. Dic Dac had an interesting book: A Walk in the Woods, a humorous book about hiking the Appalachian Trail. I read 40 pages. Dic Dac says he will let me read it when he's finished. Then I read The Street Lawyer and am already 200 pages in. Went up to the room and ate a chicken salad sandwich and peach ice cream. Back on the beach I got updates on the first Braves game.
At one point I was standing on the beach talking to someone. I was pawing in the sand with my foot, and I felt something rubber-like. I dug down and found a football buried in the sand. For the third straight day I was one of the last from our group off the beach, at around 6:30. We had 8 pm reservations at Bonefish, and we had 19 in our party. Last year our service took forever, and we didn't get out of there until after 10:30. This year the service was much better. I had the Cobb Salad, with grilled chicken. Got back to the room and had to work on the focus group thing I had signed up for.


I did see where those 680 guys got fired. Steak Shapiro pretty much started that station. Ever watch him on Atlanta Eats, his restaurant show on Saturday mornings? You would like it. I hear there is a third sports talk radio station now, but I have never tuned it in yet.

The Millers are into the College World Series, so that is what is always on the main TV. I had seen where there was a rain delay. When I was going to bed Monday night I turned on the Braves game in our room. It was after 11 pm and it was still early in the game, so I turned it off.