Like most things on TV and in life, the NFL is a take it or leave it proposition. Many Americans couldn’t give a hoot. Athletes go through their teenage years being coddled and built up solely for their God-given ability. These elite are granted expensive full-ride scholarships to the college of their choice. Many do not take advantage of the opportunities given to them, barely maintaining eligibility for the duration of their stay. Their goal is not an education or diploma. They want a place on a NFL roster. They want the money.
The NFL season lasts four months. Players wear pink in October, camo in November, and monochromatic uniforms that look like the Power Rangers on Thursday night (if they wear blue for prostate cancer awareness they are fined). Players wave their arms, calling attention to themselves, barking and taunting other players – even when beaten on the play. The games and pre-game introductions have become theatrical productions underwritten by the military, complete with fireworks and loud music. Lombardi and Halas would roll over in their graves. The average NFL career lasts three or four years. Most leave the league broke. Many leave permanently disabled or even with brain damage. What’s not to like?
It’s all a big made-for-TV show. From superstar to the last man on the inactive roster, the all-seeing media pokes into the private lives of players. Professional athletes, like us all, are very rarely great examples to be held up as paragons of virtue and model citizens. Heroes, if you will. Charles Barkley was the first to point this out.
Jesus calls us to be above reproach. To put others ahead of ourselves. To see such lived out by those in the brightest spotlight is encouraging and uplifting and rare. To see the opposite – a celebrity acting with me-first behavior, often making the news for numerous improprieties – turns me off and away from the game. That’s my personal preference. I like selfless team players and dislike selfish ones. Doesn’t matter how selfish I may be. How can one football player want to keep all the glory for himself, when the other ten blocked for him?
Player A picks a college and plays there all four years, even though he could have left early. In the spotlight he is self-depreciating, making humorous commercials and videos far from glorifying himself. Wears a number to honor his father. Travels great distances to support his brothers. On the field he gives credit to his blockers and receivers and runners. He makes less-talented players better, by practicing with them and working on their game long after practice. Works on fundamentals and reading defenses. Makes the most of his ability. Writes thank-you notes and remembers people’s names. Helps the needy without taking credit or calling attention to himself. When he scores he tosses the ball to the referee, and trots off the field with his head down.
Player B served as a backup for two seasons, then was kicked out of his first college after being arrested for possessing stolen property. Perhaps a youthful error in judgment. Spent one season at a junior college, then one season at a major-conference school (that had to fight the NCAA to keep him eligible). Rumors surfaced that his church bishop father was soliciting money in return for his son’s name on a letter of commitment. The player had a child out of wedlock. After leaving early for the NFL, player B wears jersey number one. Celebrates touchdowns by pretending to be Superman, until the son of the NFL’s all-time winningest coach convinces him to instead give the ball to a kid. This player B does, only after making it into an excessive celebration – while basically ignoring his teammates trying to congratulate him.
I may be an old fogey. I’m more of a fan of player A than player B. There’s nothing wrong with celebrating, though I think there’s something to be said for a player not getting overly excited when he does something he’s paid millions of dollars to do. We all make mistakes, and there’s something to be said for a person who stands up, rights wrongs, and makes the most of his mistakes. We all sin. But there’s something more to be said for the guy who did things the right way all along.
I am of course talking about Peyton Manning and Cam Newton. Peyton is far from perfect. Now he has little left in the tank. This may very well be his last game. He’s getting by on experience, guile, and what little is left in his body. He’s at the point where he job is to manage the game, hit a few passes, not make mistakes, and let the defense win the game. He may have been brought up in a perfect environment, though he did not squander his opportunities. Note a comparison below of their first five NFL seasons, as well as their college accomplishments. 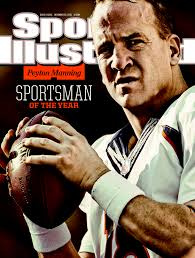 Cam is certainly not evil. I do like his playfulness. Several humorous commercials has he. Cannon arm. Beast of a runner, who has learned to use moderation while carrying the ball. We both share an interest in shoes, though I can do without his pre-game high-top teal monstrosities. Hopefully he auctions them off for charity, because every week he wears an uglier pair. Even Tom Brady has become all the more emotional and celebratory in his later years, though his actions seem more sincere, more out of appreciation for teammates and the remaining brevity of his brilliant career. Brett Farve also played the game with joy, without being overbearing. 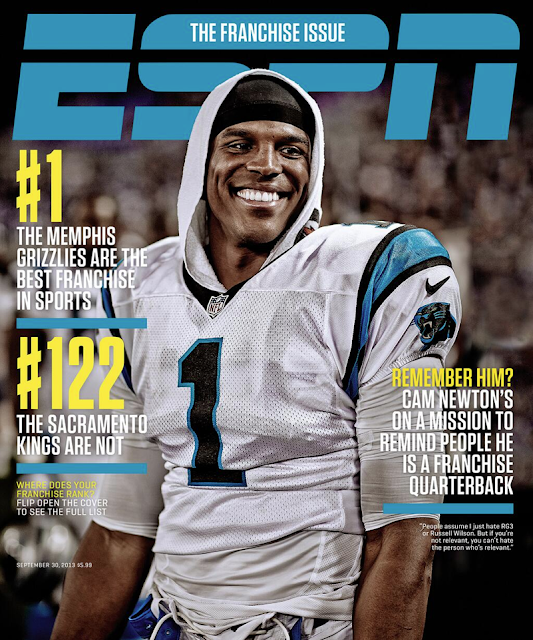 Confession: early in my teenage years I thought one was a cool number. I loved a good touchdown celebration: Falcon wide receiver Ken Burrow’s spike or the Philadelphia Eagles’ “dice roll” celebration. But I soon grew out of that phase of my life. Newton may prove me wrong. I hope he does. People can grow and mature. Whether he can build the legacy of a Peyton, Eli, Brady, Farve, Montana, Young, Bradshaw, Herschel, or Starr remains to be seen.