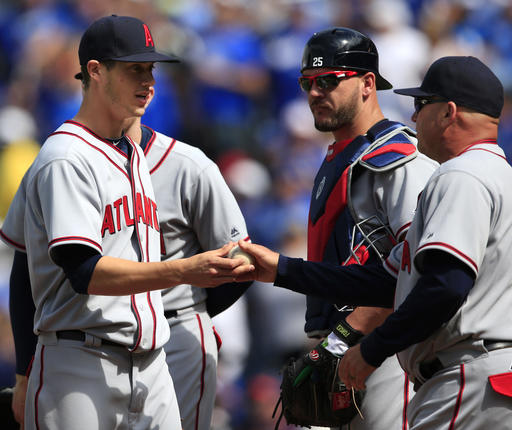 Braves fire manager Fredi Gonzalez. Must’ve been the accent mark Fredi recently had placed over the A on the back of his jersey (see below). Maybe they renewed Fredi’s contract last year because they knew it would be worse this year. Last year on July 4 the Braves were in position to make a playoff run, but Grilli’s season-ending injury was the nail in the coffin. Fredi won 89, 94, and 96 games his first three years as a manager, and was manager of the year before that in Miami. 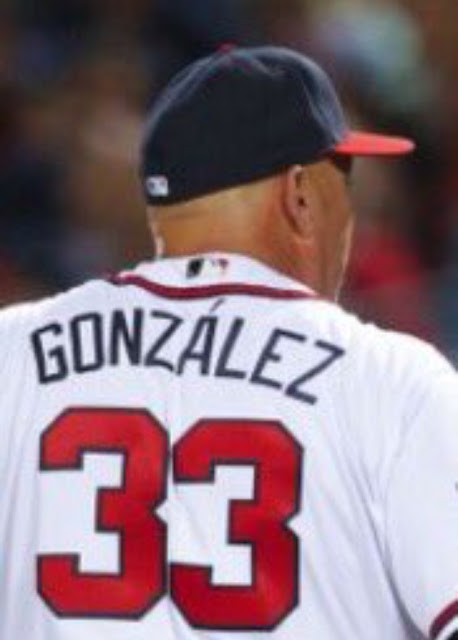 Now that all the so-called experts have gotten what they wanted, we’ll see if the Braves players start magically hitting and winning. Nice that Brian Snitker has finally gotten a managerial position, even if it is temporary. And Might as well let Snit manage the rest of the season. Good thing Gwinnett already gave away Snitker’s bobblehead. I was wondering why they had the giveaway so early in the season. Eddie Perez has been promoted to first base coach and Pendleton to bench coach. Bobby Dews died too soon.

Good article here about the 1976 Braves wearing nicknames on the backs of jerseys:
http://espn.go.com/mlb/story/_/id/15507790/uni-watch-friday-flashback-braves-keep-informal
Down in the Fan Plaza they have a life-sized cutout of the Chipper/Freddie 4-wheeler bobblehead, with Freddie’s head cut out so you can have your picture taken.
Been to many Braves games so far? I haven’t been since the April 30 game at Gwinnett, and before that the two down at Turner Field. I’m trying not to live and die on every pitch this year so am a little more out of touch than previous years. Would be nice if Wisler can keep it up for another 10-15 years, though.
ROB: I have not been to a Braves game yet this year! The young starters are looking great. I wish they would put Castro at SS and bring Peterson back up to play 2B and give them the best defense they can.  They won't score runs until Markakis and Inciarte start hitting anyway.  When healthy, Beckham has been very good on both sides of the ball at 3B.  I would also like to see Fredi drop your guy Mallex in the leadoff spot and leave him there.
ME: Williams Perez looked horrible in the first inning of that Gwinnett game, but seems to have righted himself after that (or not).
Good article about Vin Scully in this week’s SI.
I hate it for John Parkes that he won’t be able to go to games. I think the cheapest ticket might be $7.00, but it will vary by game. I will miss those dollar tickets myself.
Reading a good book “One Summer: America, 1927” by Bill Bryson. Ruth and Gehrig, Jack Dempsey and Gene Tunney. Lindbergh. Al Capone. Herbert Hoover. Very good. Sounds like things were as bad then as they are now.
Monday: Anna and John made pizza dough from scratch last night. They made a pepperoni pizza. M made one of his buffalo chicken pizzas, and C made us one with ground beef peppers and onions. M went over to Sheps house – their band has a gig the night before Halloween. J and A went to Roswell and Land of a Thousand Hills Coffee House.
One of my long stories: Friday night we went to MC’s brother Thomas’ high school graduation at JFBC. He has started dating classmate Holly – sister of Will’s friend Conner Smith, who just finished his junior season of basketball at Oglethorpe. Holly has taken ballet at Eastside Baptist Church since like kindergarten. Anna danced with Holly for years until Anna gave up dance to concentrate on art. This year Holly was the only senior in the Eastside program. This past Saturday was their year-end recital, and Thomas danced a duet with Holly. Thomas had the Troy Bolton role in the school play: High School Musical 2. Holly also had a lead role in the play.
After the graduation we went over to MC’s uncle’s house to eat BBQ. Holly’s parents stopped by – her dad grew up on the same street as MC’s dad and his brothers. I got the update on Oglethorpe basketball. Conner had a good year, but two of the best players missed the second half of the season, wasting a promising start. They should be better next year. Conner’s high school teammate at St. Francis just finished his freshman year at FSU, and could be a first round draft pick.
Need to pay a visit next weekend to see your friend at Tire Deals.