Growing Up in Braves Country 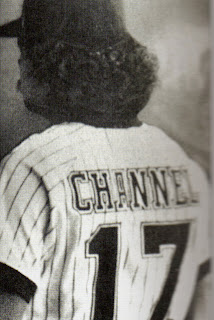 When the Braves moved to we would go to one or two games most every year. Seeing the scorecard in the middle of the program greatly interested me (also the square-funnel shaped popcorn holders). I would pour over the yearbooks…wish I still had them. Also remember Big Victor and the fuss they made over Ralph Garr being the Roadrunner. We went to lots of giveaway games: bats, caps, helmets. Those bats were great.


We have family photos of being on the field in a game in 66 or 67, with Braves players lined up in the outfield to take pictures with. Joe Torre picked up my tiny brother Franklyn, decked out in a Braves uniform. A few years ago Franklyn got Torre to autograph the photo.


One year I got to have a birthday party at a Saturday game, taking several friends. It was the NBC Game of the Week, and the Braves and Pirates set the record for most home runs in an inning. My name was displayed on the outfield message board…the one time I went to the bathroom. On Banner Night we made a huge sign and paraded it around the field.


My grandfather took me to a game where Rico Carty made the final putout of a triple play, tagging out a runner between second and third. We were sitting in left field. Later Sonny Jackson replaced Carty, and a fan berated him. Sonny charged a single and threw home…the ball hit the backstop in the air. Walking back to his position after the play, tipped his cap to the fan.


We went to fewer games in the 70’s, I guess we were busy with high school activities. Not many memories of the feather unis and the late 70’s…the Darrell Chaney years (only in photos). Wish I had gone to more games when I was at Tech. I remember attending a long Saturday evening doubleheader against the hated Dodgers in September 1984. LA won both games, depressing our playoff chances. Went to the filming of “The Slugger’s Wife”…remember that?


I starting going to more games in the mid 80’s, including the Komminsk grand slam during the Goody’s home run inning. Also Paschal Perez’s start the night after he circled 285, Avery’s first start as a rookie, and the night of the club level fire (McGriff’s first game).

Two recent Uni-Watch posts were about the 1976 Braves with nicknames on the backs of jerseys. The first article was June 19, with a follow up on June 27.

Not much going on this weekend. Saturday night we’ll go to Land of a Thousand Hills…Joel is playing music. We’ll follow MC’s pageant on line…that’s where Will is.