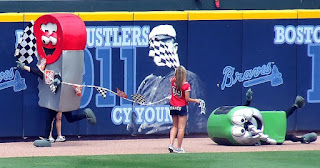 The Home Depot Tool Race is wildly popular with fans at Braves games. The race is much more fun since they’ve taken it off the Jumbotron and made it an actual race with “real” characters. Still, it lags behind similar races in other ballparks, due to its commercial tie in. The Brewers’ Sausage Race, the Nationals’ President’s Race, and the Giants’ Crab Race stand above the Tool Race.


In an effort to make the Tool Race better, here are several suggestions:


Pitchers: Smoltz (strong finisher), Glavine (slow, like his changeup), four-eyed Maddux (crafty), Niekro (weaves around the others, like his knuckleball), Mazzone (rocks as he runs), Rick Camp. Call it the Cy Young Race.