Since I was up early Thursday with not much to do, I ran to the Cherry Grove Pier and back. The wind was pretty stiff for the early morning. After breakfast I went to the Post Office and mailed off the three jerseys that I'd sold on eBay. I've got three more jerseys for sale right now, with a bid on one of them. Didn't get out on the beach until about 12:30. After a LATE lunch the wind and surf were real bad. Matthew and I could only stay in the water for five minutes, and we were dragged over one hundred yards down the beach.


Ceil's parents decided not to go to Bonefish with Ceil's brother and several others. Instead Ceil's parents took Ceil, Will, MC, and Matthew to Stephens Seafood...it's Ceil's mom's favorite. Great seafood in a simple setting. Stephens lacks the snazzy atmosphere of Bonefish...which seems to be why some of our group don't like Stephens.


I like Stephens, but someone needed to drive across town to pick up the slacks Will had taylored at Joseph A Bank. On the way I realized the minor league team had a game, not a mile from the mall. I arrived at game time, and the parking lot was overflowing. The game was a sellout, but I was able to buy a standing room ticket. Fans were standing in the ailse between the lower and upper seats, leaning against a brick wall. That's where I stood...right behind the plate. The warm bricks felt good on my back. The MB pitched had a no-hitter going with one out in the eighth inning, before it was broken up by an RBI double.

After Stephens WiIl, MC, and Ceil's mom went to the Par Three course. I came home and went to bed at ten. All the kids went to the midnight showing of the Batman premiere.

We kinda did it to ourselves with the sleeping arrangements. My five stays in a 3 bedroom condo with Ceil's parents. The third bedroom has two double beds, but Matthew doesn't like to sleep with anyone. In the past Anna has slept in the bed with Ceil's parents. With Ceil's dad's encouragement, this year Will brought Mary-Clayton along (she flew in on Sunday). Most nights the two double beds are filled with MC, Anna, and her two cousins. Will and Matthew have been sleeping on the couch, then M takes my place when I wake up. Last year M brought along a friend, but Will didn't come last year. 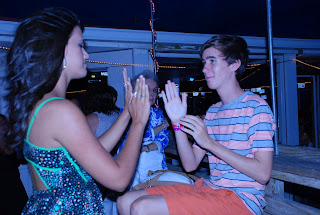 Ceil's brother Rusty's family has their own three bedroom condo, on this same fourth floor. Not sure who pays for it. I guess the idea is that since we see less of Ceil's parents, we stay with them. Ceil enjoys it, and I sure don't mind. Rusty has young guests in their condo, and his in-laws from Abbeville spent Thursday night there (I think). Ceil's cousin Phil (Victoria's dad) has an eighth floor condo for his family of five, and Larry & Susan's young family is also on the eighth floor. I think Monte & Lynn's young family are staying with Larry. George & Stephanie's young family are staying off site, but join us on the beach every day. I've enjoyed hanging out with George this week. He's a good, down to earth guy who loves sports. Not that all the guys aren't the same. In all, there are 51 here in our gang.

This past Sunday George, Larry, and the guys were closely watching how Tommy "Two Gloves" Gainey finished up in the PGA tourney. He's from Bishopville, which is near Jefferson. George and Rusty have played golf with Tommy, and a few years ago we saw Tommy at Bonefish here a North Myrtle Beach.