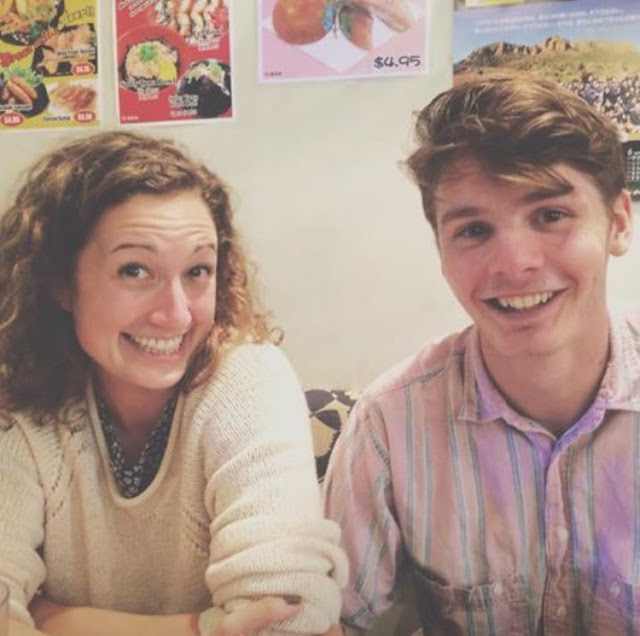 The wedding was just up the road in Roswell Presbyterian’s large sanctuary. Church weddings are back! There was plenty of room for all the guests. A very God-honoring ceremony. The flowers in the sanctuary were in honor of Steve. We knew most of the groomsmen: brothers Spencer, Willis, David along with Living Science chum Wesley Arasmith, whose family attended East Cobb Pres with the Norman’s and Blass’s. Three ministers, one from the church, one a campus minister at Kennesaw, and one from the couple’s current church: Atlanta Westside Presbyterian. They young ministers seemed to rush things along.

The bride was beautiful. Annie Blass met Charles at ECPC when they were 13 years old, and not long afterwards started hanging out at the Normans house (as many teens did back then). Soon she had her own housekey. The Murphy kids were part of that mix, and every time I saw Annie she’d have a huge smile on her face. At the reception toasts by best man Joel and Annie’s sister/maid of honor Catherine told her story. As a fourth grader she took the second graders under her wing and mentored them. “What kid does this?” asked Catherine. Since she’s hung around the Norman house for so long, she’s pretty much been a family member for some time. In college both Charles and Annie worked as summer youth interns, and now Annie teaches special ed in downtown Atlanta.

One of Annie’s students served as ringbearer (at the rehearsal dinner he called Ceil “grandma”). Josiah George’s precious daughter served as flower girl, teetering down the long aisle dropping rose petals - until she finally spotted her mum near the front. Then she raced the rest of the way, jumping up into Niki’s pregnant lap in the second row. So many young couples in attendance: Josiah and Niki, his brother (and Joel’s musical partner) Isaac and bride Margaret Ann, David and Beth Norman, DJ Hoffer and his bride Alicia, Wesley and his bride Carrie, Ashley Corbitt’s son with his. Joel danced the night away with his date. Spencer Norman and his elegant wife Matty graciously came over during the reception to talk to the Hurts, Corbitts, and Murphys. They’re still in Colorado, though Spencer does some work in California.

The reception was a short walk across the street at Primrose Cottage, with an elegant buffet of salmon, roast beef, and more. Joe’s best man speech was hilarious and sincere, better and funnier even than his speech at Will’s wedding. Since he knows Annie so well, his love and affection for both Charles and Annie was clearly voiced. After the couple’s first dance, and Annie with her dad and Charles with Becky, the youngers got to their dancing. Annie proved more of a dancer than Charles, but tall Willis made up for his youngest brother. Soon skinny Charles had been lifted high in the air.

There were many older couples as well. We sat with David and Mary Hurt. Lindsay Acuff escorted his wife and mother. Ashley and Dianne Corbitt. Flight basketball coach Craig Hoffer and wife Cathy. David and Kathy Arasmith. Jeff and Michele Pipe. Neighbors Lee and Ginny Bates. Josiah and Isaac’s parents Brent and Laura George. Danny Brundage and wife Donna, who taught Annie at East Cobb Christian School. A former GT BSUer, Danny hadn’t realized Charles was Steve Norman’s son. It was fun catching up with everyone.

Former Living Science teacher Andy Whorton drove over from Alabama for the nuptials. Andy and I are fast friends on Facebook, and even as he enters his forties cuts a mean rug on the dance floor. As we left Andy pointed at me and, within earshot of Ceil and Anna said “keep posting that crazy stuff!”

Catherine Norman stopped by our table as well. She couldn’t believe Anna had turned twenty-one, and wanted to drink wine with her. Catherine is still as smart and beautiful as ever. As she walked up the aisle in the procession of bridesmaids at the beginning of the wedding Catherine stopped to kiss Charles on the cheek. She still teaches in Memphis, and looks forward to meeting up with Lang, Isabel, and Beck.

Toward the end the single folk moved outside for the tossing of the bouquet and garter. Charles and Annie went upstairs to a balcony to do the honors.

So if you’re keeping score at home, now half the Norman kids are married: Spencer (the oldest), David (third youngest), and now Charles (the youngest). Not yet married are Catherine and Willis (second and third oldest) and Joel (second youngest).