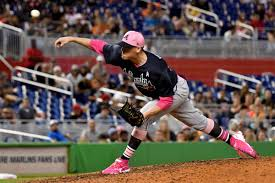 Another effective outing tonight for Braves reliever Dan Winkler.
Last week he entered the game wearing red shoes and striped socks.
Couldn't find a picture, but did find a couple of other gems. 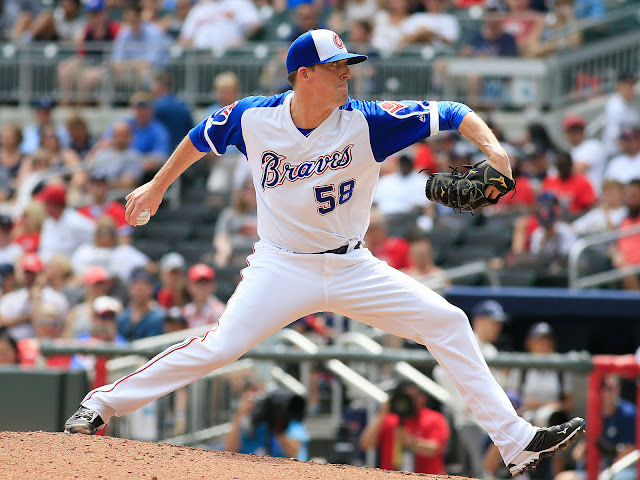 A few years ago Winkler broke his elbow pitching at Turner Field. 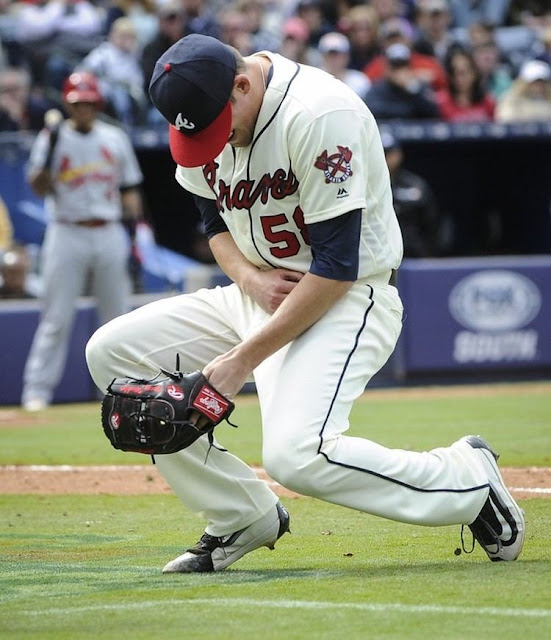 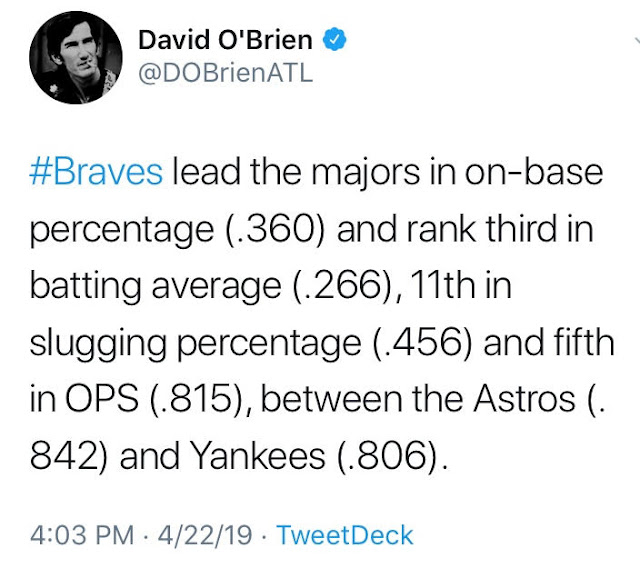 Its interesting how different people go to different places. I’ve always been happy with a relatively low quality of food, be it Taco Bell, Wendys, Cici’s Pizza. Lately we’ve been eating at nicer places: Antico, Moxie, Papasittos, Pizzaria Luccia, etc. A step above chains like Roadhouse and Red Robin. That said, Saturday night our team at work is going out together to Top Golf in Roswell. We’ll see what the quality of food is there. My tastes have been trending upward in the past few years. That’s why I was wishing my team was eating somewhere nicer than Top Golf on Saturday.
Same with ice cream. After working at Baskin Robbins I know what good ice cream tastes like. Ceil likes Jeni’s ice cream, which is over there at Westside Provisions near Taqueria. Also in the Alpharetta Avalon near El Felix.  BR31 and Jeni’s has much less “air” whipped into the ice cream, and has a higher milk fat content, making it tastier and more rich than grocery store ice cream, especially store brands. The difference is night and day.
That Pasta Factory building in Roswell has been so many different businesses, hopefully the restaurant can stick. Pure is practically next door and there are three places across the streets, including Luckys. Then more a block away in downtown Roswell. Not too far from the famous Moxie Burger, you know.
Some people think others drive a long way to church. I suppose any distance may not matter if you like the church. When my dad joined Mable White Baptist Church it was on the other side of town, eleven miles and at least 20 minutes away. In Atlanta everything is about 30 minutes away.
miles/minutes
03.4 10 our house to Johnson Ferry Baptist
04.5 10 dad's house to new Mable White
05.5 12 dad's house to Rock Springs Church
08.8 17 W&MC's apartment to their church
11.0 20 dad's house to old Mable White
Was researching the Joshua Tree National Park, one of the places Anna will be visiting on her trip.
https://en.wikipedia.org/wiki/Joshua_Tree_National_Park 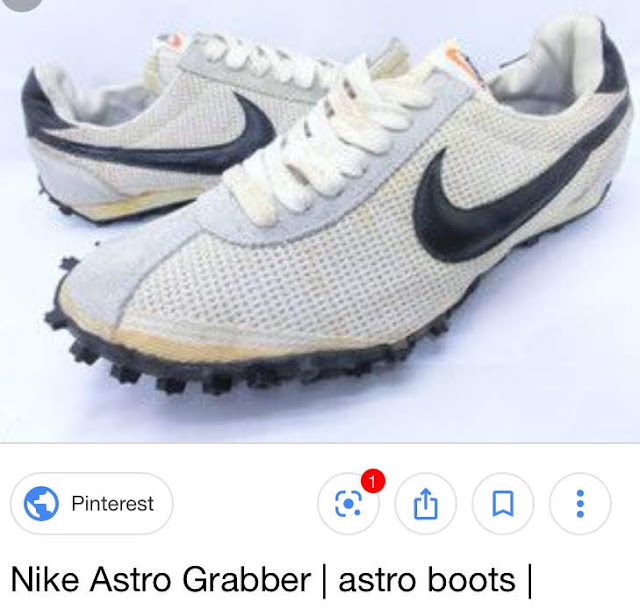 The Nike Astrograbber was one of the first “cleats” made specifically for astroturf. While most Georgia Tech football players in the late 1970’s wore adidas, a few backs wore Astrograbbers. Head coach Bill Curry also wore them. Interesting Nike slideshow: Nike Football Illustrated: A timeline of game-changing Innovations …
https://urldefense.proofpoint.com/v2/url?u=https-3A__images.app.goo.gl_uCcCH3cxHqkpA6176&d=DwICAg&c=UXihhqr7vvdA-hrKyTiC1Q&r=wMWwaEbn9nr4zXI4p6CDP7FGwn1DrBd77MJElrWsP6U&m=m0lcTEaLik-8zxvyvFHDDjiwOKAuqlM3vNJFZrAilig&s=ynPYFMO7iAV9YEgFMml5cE3LDkSmxWKjwFD8_w3ll8c&e=
As a boy my family would visit my grandmother in Atlanta’s West End. As I recall she lived on the same street as the Wren’s Nest, the historic former home of author Joel Chandler Harris. Formerly Gordon Street, renamed Ralph David Abernathy Boulevard SE, not to be confused with the stretch of Interstate 20 a few blocks to the north, which bears the name Ralph David Abernathy Freeway. Anywho, Will’s church is on that same street.
https://en.wikipedia.org/wiki/Joel_Chandler_Harris_House
Monday after work Cheeseburger Bobby’s was having a special deal on their ice cream cones that I fell victim to. They make them look so good in the pictures and emails, but of course in real life it wasn’t anything special.
Was almost six before I left work. Had planned on leaving at 5:30 but was doing stuff for other districts. Work continues to be busy. Ceil grilled chicken, tossed a salad, cooked a black-eyed pea dish. Baked sweet potato strips. She went out to TJ Maxx. Watched The Neighborhood and The Voice.
Tuesday: Not much to report. Left work at 5:30. Dropped off two books at the library but didn’t go in. Dropped by Goodwill to look around.
Got home and noticed the side door open out to the garage. Barney was sitting in the open door of Ceil’s car. He doesn’t like it when we cook in the oven. He smells the smoke and hates the smoke detector alarm. Usually he’s happy to sit in the car, but when he saw me he came outside. Then he went to the backyard and down to the creek. Then he wants to explore and doesn’t come back. Then he couldn’t climb up the steep hill. Ceil had to chase him down.
Supper was breaded chicken tenders, tossed salad, and baked potato and sweet potato wedges. Helped clean up. Watched some Braves. Ceil started watching a Hallmark movie. I was tired so I went to bed at 9:20.
Since Ceil has her small group tonight, after work today I am stopping by Moes for supper.

If I visualize the misplaced apostrophe, does that make me a loser?
Was reminded of George Plimpton’s creation Sidd Finch. Were I a Mets fan his would be a cool jersey to own. https://en.wikipedia.org/wiki/Sidd_Finch
Other cool jerseys on my list:
21 Mets Sidd Finch royal
44 Bama Forrest Gump
66 Clemson William Perry
30 Clemson Dwight Clark
34 Eagles Herschel Walker
Channel 17 Braves Andy Messersmith
Braves Bobby Dews
18 Georgia Tech Billy Lothridge
98 UGA Rodrigo Blankenship 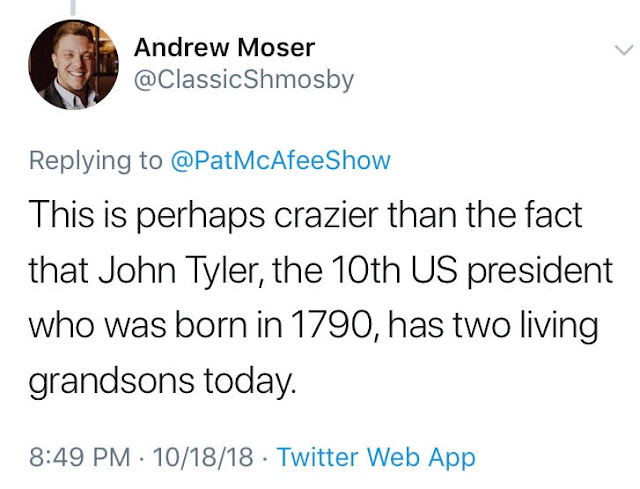