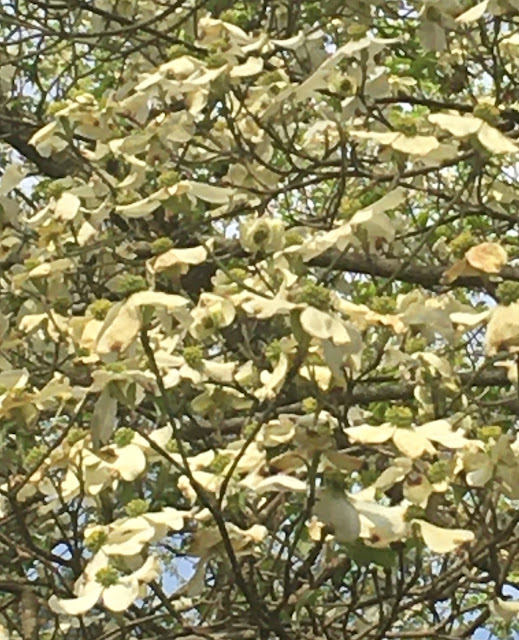 Working from home day one. Typing on the laptop and looking at the smaller laptop screen instead of a regular keyboard and my two big screens at work. No mouse. I'm far less efficient. Might sneak back to the office at some point for the mouse and other needed items.
I usually go outside when I have to talk on the phone. At least the view is nice. Made several calls, kicking all the gumballs off the driveway and street. Sounds like I’ll be working from home at least until April 13. Some of the inside salespeople will be coming into the office every other day, but not my team. More news: customer has shut down their factory for 2-3 days to fumigate after a coronavirus exposure. 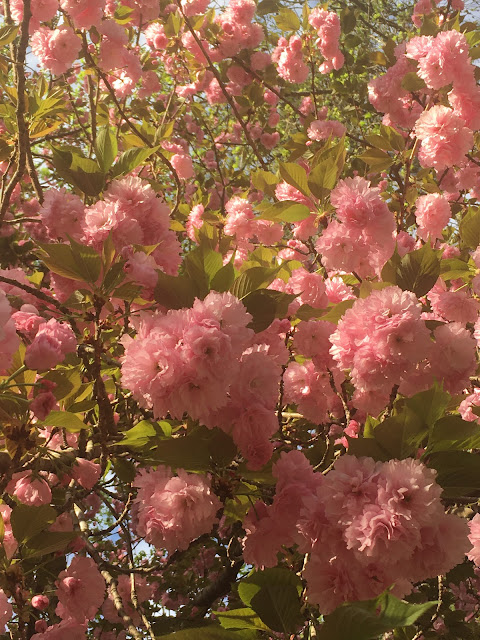 The Bible commands us to “fear not” 365 times – once for every day of the year. What good is living, if I live my life in fear? Hiding in my home when I having aging parents to help out, minister to, and love on? Life is a risk every day. 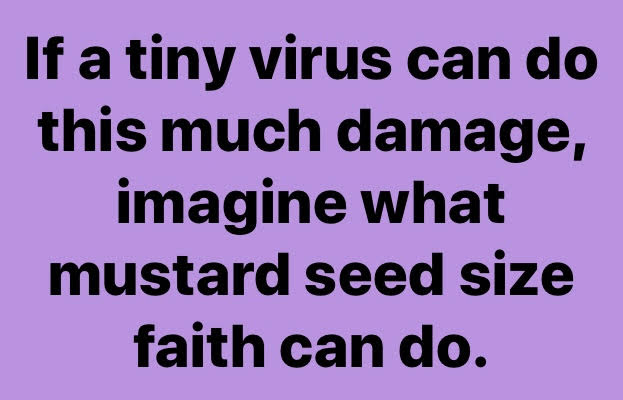 A doctor said the virus is impossible to catch if you don't touch your face.
Super busy weekend. Left work Friday just after five and drove straight home. Ceil was at the end of her rope, so I took her to Whole Foods. She wanted some Tylenol but Target and Publix were out, but CVS had some.
Ordered a takeout from Pizzeria Lucca. The wait was almost an hour, so we drove around Roswell until it was ready. The pizza place, just off the Roswell Square, had their dining room closed but were walking the pizzas out to the customer’s cars in the parking lot. Glad to see they were busy. When we drove through downtown Roswell there was a little takeout business at those restaurants as well. Saw where the old Value Village shopping center in Roswell (near your old haircut place) has been torn down – supposedly to make room for a Roswell “town center” of shops and restaurants similar to what they’ve done in Alpharetta. This will mean more closer restaurants for us, as well as more competition for good ole Moxie Burger and Pizzeria Lucca.
Long Saturday. Left home before seven and headed to Macon. CFA biscuit. Packed the SUV with mom’s furniture & left out at ten for Milledgeville, about 50 minutes away. Stopped by CookOut for their burger & shake special. Got the tour of mom’s new assisted living facility, unloaded, & headed back to Macon for another load. Got back to Macon from the second trip around 5:30. Grabbed another strawberry shake from CookOut, which was supper. Tired. Hung out with dad Saturday night. Caught up on email from the week. Got little sleep on the couch.
Longer Sunday. Loaded the car with load #3. On the way to pick up my mom from her rehab place I stopped by CookOut for another burger & shake special. Much better than Wendys or Taco Bell, or of course McDonalds or Burger King. At the rebab place I had to wait 45 minutes for them to bring out mom. Drove to Milledgeville. Got her unloaded. After she had an orientation with the director and two nurses we had lunch there at the cafeteria: meatloaf, mashed potatoes, English peas, biscuit, and pineapple upside down cake. The big TV was showing the 1985 NCAA final between Villanova and mighty Georgetown, with Patrick Ewing, David Wingate, etc. I still remember where I was when that game was played, volunteering with David Deeter at the Morningside homeless shelter.
Spent the rest of the afternoon unpacking and getting mom settled, taking inventory and getting things set up. Who knew how much work this could be. Most of the time there were six people stuffed in her little apartment. Crazyness. Brother went to pick up a mattress and box springs, then later made a return round trip to Macon for more stuff, leaving me to deal with mother for most of the afternoon / evening. Not sure what my sister was doing this weekend. As the only resident you could hear everything that was said all over the facility. My mom was putting the new staff through their paces. Hopefully she won’t wear out her welcome.
Due to the busyness, I missed my group conference call. During Sunday I was learning about my office closing as well as the customer closing, knowing trucks would need to be cancelled immediately. Didn’t leave Milledgeville until 9:15. Spent the next hour on the phone. Stopped in Madison for gas and McDonalds. Didn’t get home until 11:30. Felt like I’d been beaten with a stick.
Exhausted. Didn’t really sleep well. Only got six hours of sleep, 4:40 quality, and 2:20 of deep sleep. That Diet Mtn Dew Big Gulp probably didn’t help.
This weekend Ceil put out sixteen bales of pinestraw. Today she drove up to school to get art projects to work on. 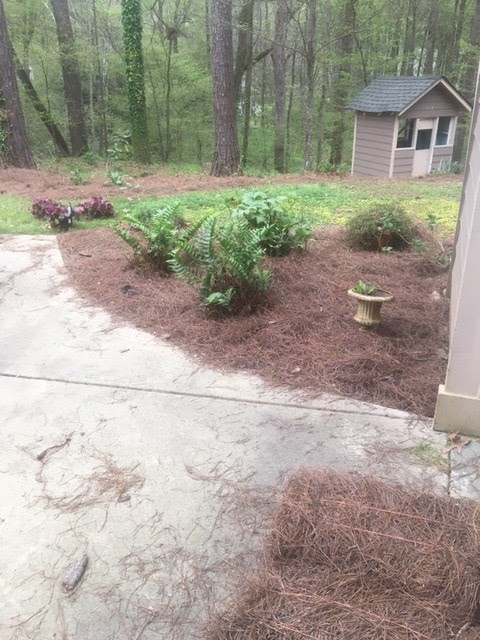 M is working on a project converting wood pallets to shelves for his plants. 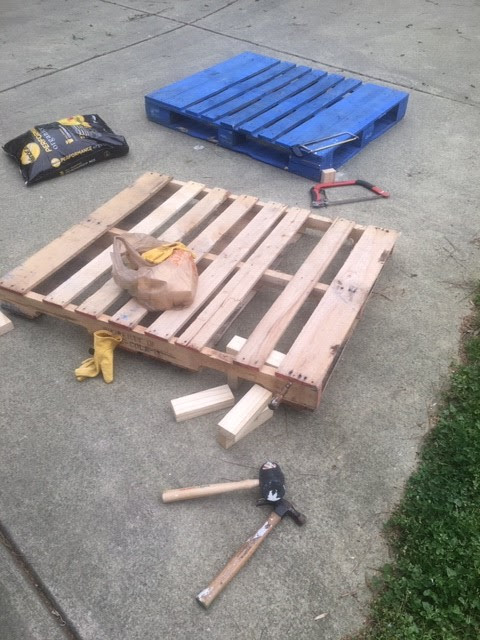 From O’Reilly’s book on the Wild West I’m reading: Annie Oakley’s real name was Phoebe Cates. Phoebe Ann Cates. Doc Holliday was born in Griffin GA, grew up in Valdosta, and later moved to Atlanta – where he probably killed his first man. Due to a tuberculosis like condition, his doctor’s suggested he move to a dryer climate, so he moved west.
My brother sys he works for Orvino Wine Imports. Helps make sure there is enough wine on the shelves.
A single lady from our Sunday School class is moving to Vegas to work at a church out there. She has pets so she booked pet-friendly hotels. Here’s her itinerary…
Miles.Hours
677 9:50 Marietta to Van Buren ARK
316 4:37 VB to Sayre OK
240 3:28 OK to Tucumcari NM
175 2:35 Tucumari to Albuquerque
323 4:44 ALB to Flagstaff AZ
238 3:32 AZ to Vegas
1963 28:46 total
I might’ve told you that several years ago I had compiled a list of all major sporting events I’d attended in my life, going back to the mid-1960’s. When I got a new laptop a couple of years ago, I forgot to move that list over from the old computer. Thought that list had been lost forever. Today while working from home I stumbled across the list. Bingo! I’ll try to move the list onto my blog so it will be more “permanent” but that will take some work. I can’t figure out, however, how to bring up some of my current spreadsheets. Might have to get help.
July 18, 1951 Ralph Kiner hit 3 home runs and 7 RBI in a 13-12 win over the Dodgers.
https://baseballhall.org/discover/inside-pitch/kiner-hits-three-homers
CARLTON FISK  [SABR Bio] was the first unanimous Rookie of the Year Award winner in the American League - ROY 1972 He once walloped a home run that hit a synagogue. In his first of three plate appearances on a rehab assignment with the South Bend White Sox in 1992, he hit a 3-run homer that struck a synagogue down the left field line, just outside the ballpark. The synagogue was renovated this past year and was then made into the merchandise hub for the Silver Hawks. On a nearby fence, there is a plaque commemorating the Fisk shot. At the time of his retirement, he held the records for most games played and for most home runs hit by a player at his position. His record for games started played at catcher was 2,226 but was passed by Ivan Rodriguez in 2009. The record is now 2,427. His record for HR by a catcher was 351 but was passed in 2004 by Mike Piazza and is now 396. He led the league in triples one year and the following season didn’t hit a single triple—no not one! In 1972 led the AL in 3B as a rookie with nine. In 1973, with 51 more at-bats, he hit exactly…zero.