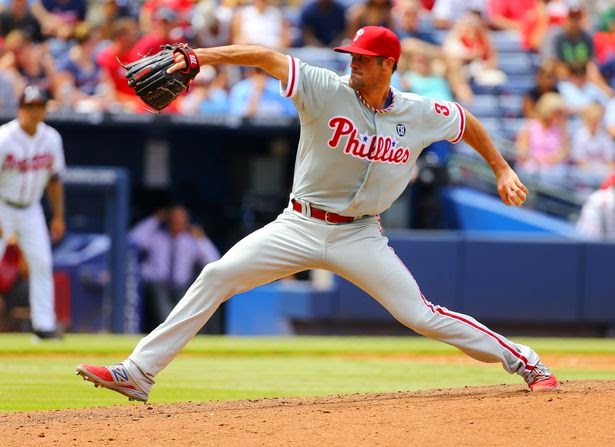 One rule I always follow when attending a baseball game: never leave if there’s a no-hitter intact. Few games ever came close – until Labor Day.  The Phillies used four pitchers, including ace Cole Hamels and closer Jonathan Papelbon, to no-hit the Braves in a long, hot, almost interminable classic.

Left home at 8 am loaded with three drinks to keep me hydrated. Picked up BOGO Egg McMuffins for breakfast and a free Chickfila biscuit, stopped by the ATM, drank my first Fresca, and made it to my usual parking space by 8:50. Had a nice peaceful ten minute walk to the ballpark, where my usual gate was still locked. Found another gate open, and took my place (10th) in the dollar ticket line. By the time the gates opened 1-1/2 hours later another ten people had cut in line ahead of us. Had I been a more regular attender I would’ve called out some of those thinking they were so entitled to cut.

I passed the time chatting with those around me. John Parkes was doing well. One lady had just left the hospital and drove downtown with a boot on her right foot. She would go back to the hospital after the game. A guy I’d traded bobbleheads with got in line behind me, with his family. Tanner Pittard and his mother were about 50th in line. Drank my Fresca, since the can wouldn’t be allowed inside.

After the gates opened I didn’t see Marshall or Johnny (his brother had passed away) so I left my backpack with John Parkes. Thought I might make it through the dollar line again, but it cut off with about 20 ahead of me. Re-entered for a second Bobby Cox bobblehead, stashed it in my backpack, and went back for a third. Cashed in my free ticket voucher, met that day’s bobblehead trade at the Hank Aaron statue, and re-entered to get a third bobblehead.

Sat and talked with John Parkes for a while (batting practice had been cancelled) then we went through the designated driver line together. Then I went to get the Hank Aaron jersey/tee that came with my ticket. This meant standing in another line, where I met my bobblehead pro. I traded an old Bobby Cox and Andruw statue for Don Sutton and the Evan Gattis I had missed. By then it had been an eventful two hours, so I headed to my centerfield seat to don the new jersey and fuel up on the CFA biscuit and energy bar. On the way I saw Crazy Darrell messing with Lemke, so I playfully put a chokehold on Darrell.

After ten minutes I abandoned my seat and met Rob and his daughter in the Fan Plaza. They were also wearing the Aaron jerseys, so as we talked we were repeatedly interrupted by fans asked where they could pick up their jersey. Rob nodded to his daughter and said they’d stay “as long it it was still fun.” I mentioned my no-hitter dictum. An old Phillies fan offered his bobblehead to Charlotte, but she already had one.

I headed to my free upper deck seat behind the plate, which had the best chance of shade. Made to the seat just after the national anthem. Next to me sat a dad and his daughter, a GT student. She kept score and kept an eye on the out of town scoreboard as they discussed the intricacies of baseball and football. Late in the game I returned from the concession stand and told them I was moving down one seat in the hopes of changing the Braves’ luck. They understood.

One family of four drug in late. Their 7 year-old son was outfitted in a complete uniform: nice Braves cap, authentic navy jersey and belt, grey baseball pants, new Nikes – and an iPhone clipped to his belt. Little 3 year-old brother rocked Air Jordans. They snacked on a jumbo stadium popcorn. I sipped on my free Coke.

The “Simba-Cam” was so funny – parents holding high their babies to re-create the scene from The Lion King as “The Circle of Life” played. The organist’s tunes included: For Dominic Brown: Brown Eyed Girl and the Charlie Brown Theme. For Cody Asche: Ring Around the Rosey. For Ben Revere: Bennie and the Jets. When the jumbotron showed a teen dancing to a rap song, two other pre-teens raced over to grab the spotlight. One couldn’t even dance. After the game the Braves let Grandparents “Stroll Around the Bases.”

Nothing went right for the Braves. Andrelton made an error on a hard hit grounder, and Heyward lost a fly ball in the sun (graciously ruled a single). Pena was on deck when the game ended, ready to pinch hit for Simmons. The 34 pitches thrown by Jaime in the 8th were insufferable.

Did seem odd for Fredi to pinch hit for the August player-of-the-month on September first. Guess Fredi was trying to break up the no-hitter with a higher contact singles hitter, and give Justin a breather in the 7-0 blowout. I’m just glad Constanza didn’t bunt. To his credit Justin gave the right answer to the press, however steamed he might have been.

I can understand pinch-hitting for Hamels on such a hot day. Not sure how he took it, but he seemed pumped in the post-game celebration. Sandburg managed that inning perfectly. You knew the Phillies were going for the no-hitter when closer Papelbon pitched with the huge lead. Can’t blame them. As the game ended the Phillies players dashed out on the field in celebration. Hamels received most of the pats on the back, and was pulled aside for the obligatory postgame interviews. 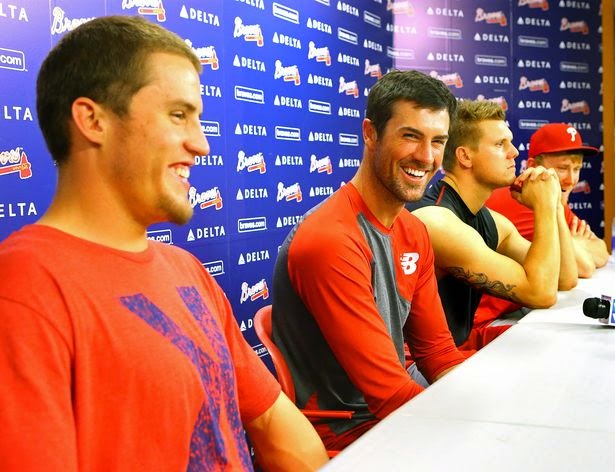 ROB: We left in the 7th... I was probably over the game more than she was by that time. I was at the Mercker/Wohlers/Pena game in '91.

I am not in the FireFredi camp, but he makes odd decisions at times.  It makes sense to give a regular a few innings off in a 5-0 game - especially when our offense makes 5-0 seem more like 10-0 - but you have to try your best to break up the no hitter.  The Gattis PH thing also bothers me.  He is the 3rd or 4th best hitter you have.  If he is not starting, you need to make sure he gets a PH at bat.

It sounds like Bradley thinks Gattis will be traded as well.  I don't know whom or what the Braves will get for Gattis.  Whatever it is, the fans will complain about it not being enough.  The logic makes sense - he is more of a DH as opposed to an everyday catcher, however there are not a lot of AL teams using a full time DH.  Even if they were all looking for a full time DH, a market of 15 teams is significantly different than a market of 29 teams.

ME: Only after the game did I make my exit. Traffic on the downtown connector was jammed, though I whizzed though the 75/285 interchange next to the new ballpark going 80 MPH. The day wasn’t a complete loss – I grabbed another Cheeseburger Bobby’s deal on the way home. All told I saved almost $160.00 on Monday…