At last night’s Hot Stove meeting former Reds catcher Glenn Sutko was a no show (he was tied up coaching travel ball). Instead we played baseball card poker. We were each given an unopened pack of 1993 minor league cards, and we went around sharing players we got. My pack had a Durham Bulls Brad Clontz, a Doug Glanville, and a Brad Ausmus. Also a Derek Jeter. Someone else had a Johnny Damon. Also a Terrell Buckley Macon Braves card. He played cornerback at FSU. 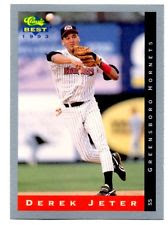 Picture eleven old men sitting around squinting their eyes to see which player lives the closest to Atlanta (Douglasville) or who had the highest batting average or ERA. The one guy younger than me brought his nine year old son, who was pretty bored until the end of the meeting, when everyone gave him all their cards. Well, I kept Jeter.
One of the two SABR guys invited me to their March 24th meeting. They used to meet at Manuel’s Tavern, but now they’re gathering at the Hudson Grille in Sandy Springs. Johnny, the Hot Stove leader, goes to every meeting he can. He eats it up. In June he’s leaving a luncheon at Turner Field, driving to Biloxi for a Friday night game, then back to Alabama for the Rickwood Classic.
No more Hot Stove meetings until November. We all made predictions for which teams would make the playoffs. I just guessed. There were 12 at last night’s meeting. All the retirees at the meeting were talking about attending all the weekday day games at Turner Field, Gwinnett, and Rome. Rome has a couple of 10 am starts.

Some of Johnny's bobbleheads, including the rare Rome Hot Dog bobble.
This morning Barney came upstairs at 4 am and pestered me to let him on the bed (move over to give him room to jump up on the bed). I did and then he started licking my head. I was planning on getting up at 5 to go walk/run and knew I wouldn’t get much sleep with him rooting around, so I got my stuff and went downstairs to sleep the last hour on the couch.
Busy at work but I’ve just about “caught up.” Today we have meetings at 10, 11, and 3. At least Friday should be slow.
Last Thursday Andy Stanley posted an apology on Twitter about his small church comments, and followed it up with a contrite interview that’s on the Christianity Today website. Even then there were self-described pastors responding to his apology with vile comments, calling him out all the more. No church is right for every person, yet people blame the church when there’s not a connection. Just find a place that’s right for them.
Mary, Glenn, and Elizabeth have all posted informative updates on Facebook, I guess since so many people know Barbara.
Anna’s sorority formal next weekend is at the 755 Club. They’re all riding in busses over there and back.

Weight loss tips:
1. Snap a selfie. Taking a weekly full body shot could help motivate you to shed an average of 2.6% of your body weight in four months.
2. Swap intervals for cardio. Prompts your body to continue burning extra calories long after the workout.
3. Snack then shop. Eating an apple before grocery shopping. Those who do bought 28% more produce and less junk food than consumers who snacked on cookies.
4. Track your progress. People who weight themselves regularly lose more weight than those who don't.
5. Take a 30 minute walk every day and lose an average of 1.6 inches off your waist.
6. Snack on almonds. Much better than muffins.
7. Take a nap. Helps your brain produce chemicals telling you when you're full. Lake of sleep produces a chemical that makes you want to eat more. I'm convinced.