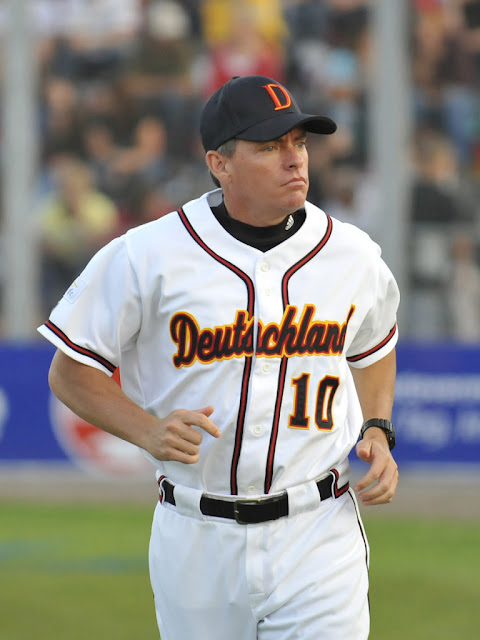 The first hot stove meeting of the offseason was one of the better ones, with veteran Georgia State head baseball coach Greg Frady and his new pitching coach Chris Bootcheck as speakers. Ellijay-born Frady was a polished speaker in the Southern tradition, telling great stories tracing his career as well as honestly addressing all questions tossed his way, including partial scholarships, pitch counts, transfers, drug use, and player discipline.
I arrived at the Tallant Baseball Museum north of Cumming shortly after seven, finding the “parking lot” full. Eighteen attended: many regulars and a few new faces. As usual, host Johnny knew everyone. I found a seat next to Old Hugh, who was sporting a new cap. I passed on a taller chair, which turned out to be a perfect perch for Coach Frady.
Frady traced his career from Ellijay to Troy State (where his met his wife, a Florida gal) to Columbus State University, to a junior college on the Florida panhandle, to UCF in Orlando. He recalled a dove hunting trip with his father-in-law that was to include another “baseball guy” – who turned out to be Ted Williams. While the instruction time droned on Williams stood to the side, messing with his gun. Suddenly a dove flew through the air. Williams raised his gun and fired just over the head of the host, an elderly Florida luminary who’d once ran for president (Samuelson?). The host pulled up his rifle and fired just of Williams’ head. Young Frady did not fire his gun that day, or speak to Williams.
While at UCF Frady was recruited to coach the German National Team, an adventure he loved. The hapless Germans were second division and ranked 220th in the world when Frady took over. When Frady left they were ranked 17th. He learned much competing around the globe, including at a World Baseball Classic, and raved about “future all-star” Max Kepler of the Twins and powerful but raw slugger Donald Lutz of Reds. 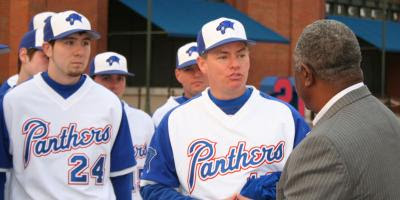 Not long after he had taken over at Georgia State, Frady had his uniform supplier make up a set of the Braves’ early 70’s feather uniforms to honor Hank Aaron. He dressed up his team and took them to an early morning meeting at Turner Field with the home run king. The Hammer spent an hour asking and answering questions from the team, then asked Frady out to lunch. 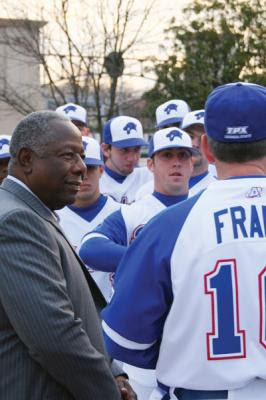 
Frady then talked in detail about the big news release of the day: the State of Georgia had approved the new GSU football/baseball complex on the Turner Field site. He said the artists renderings were just that, and the actual plans had yet to be finalized. They’re looking at three possible baseball plans: one in the original footprint of the old Atlanta Stadium, one facing more toward downtown, and a third closer to the football stadium. The Braves clubhouse in Turner Field will serve as the GSU baseball locker room, and football and baseball will share a weight room inside Turner Field. GSU takes over the site on January first, and Frady expects baseball construction to begin in the spring. While he prefers grass, Frady knows artificial turf is more practical for his spring season. 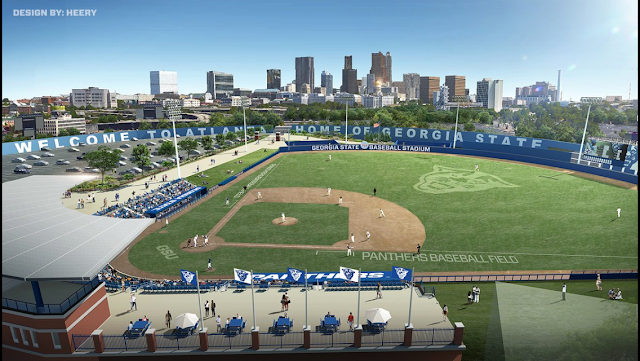 The new baseball stadium will feature a Hank Aaron monument in left field, and seat 2500. That way an additional 1000 temporary seats can be added so the stadium can host NCAA subregionals and other tournaments. Frady’s dream is to have a Hank Aaron Museum/exhibit as part of the stadium, with a GSU baseball museum as well. Down the road softball and soccer are part of the ten year plan. GSU is partnering with a real estate developer who will build a grocery store and other shops and restaurants.
GSU has impressive 2017 schedule, including BYU, Oklahoma, Minnesota, Tech, UGA, Kennesaw, and Mercer.
Last year an open tryout yielded a rare talent who made the team as a backup shortstop, who received limited playing time behind an All-American. After the season it pained Frady to do the right thing: encourage the player to transfer to a JuCo where he could play more, in the hopes of then signing with a school where he could play.
http://www.georgiastatesports.com/ViewArticle.dbml?DB_OEM_ID=12700&ATCLID=620557 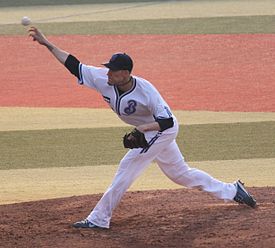 Bootcheck also shared stories of his career, which spanned from three years in Auburn through 15 professional seasons. He was the number one draft pick of the Angels, and also spent time in the Tigers, Pirates, Tampa, Yankees, and Phillies organizations. Over seven of the 15 seasons Chris bounced between AAA and the majors, earning over three years of MLB service. He played for Mike Scioscia, Joe Maddon, and Joe Giraldi (I should’ve asked him about Don Zimmer). Originally a starter, Chris later closed and relieved. His career highlight was making a spot start in Yankee Stadium. Bootcheck also played in Japan and Korea, which helped him earn the job on Frady’s staff. 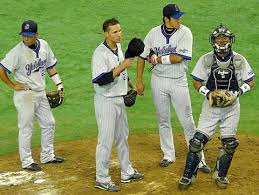 http://www.georgiastatesports.com/ViewArticle.dbml?DB_OEM_ID=12700&ATCLID=211126991
I asked the coach about Christian Cook, a former teammate of Will’s. The coach smiled and told several entertaining stories about Christian, his former mullet-coifed bullpen catcher who rarely wore a shirt. Christian had bought an old Dodge Challenger and painted it up like the General Lee from the Dukes of Hazard. Christian loves to fish, and had planned to spend the past summer driving cross-country in an old vehicle towing a camper.
http://www.georgiastatesports.com/ViewArticle.dbml?DB_OEM_ID=12700&ATCLID=209873278