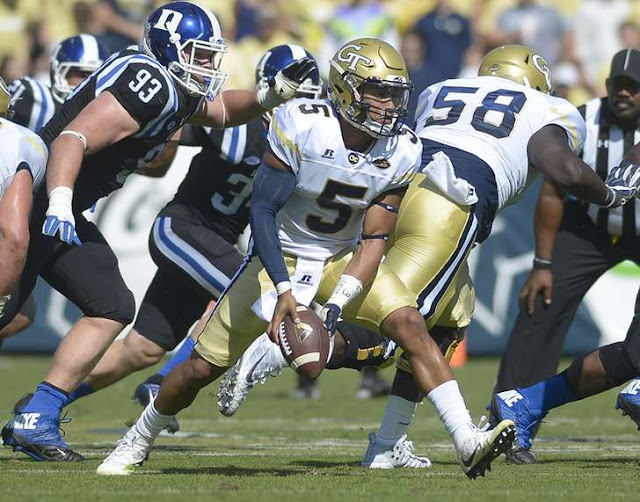 GT/Duke: That second half in particular was brutal. Makes it hard to be a fan. No reason a major college football team located in the heart of downtown Atlanta shouldn’t compete for the ACC division championship every year, and play a better brand of football. The upcoming games against Virginia and Virginia Tech are going to be tough. Both are playing good football.
Kickoff return guys hardly running at all once they field the ball, instead barely trotting while the Duke kickoff team was racing downfield toward him at full speed. A return man has to get to running as fast as he can quickly, otherwise he’ll hit those defenders at the ten yard line instead of the twenty.
My observation from the game: I think Johnson has figured out the his option isn’t working as well this year, either because of a weak offensive line or running backs not getting the job done. Johnson seems to be calling more pass plays than ever before. Maybe it’s because he’s finally got a QB how can make throws. Looks like that backup QB Bryant is a good runner. Hopefully he can throw the ball as well.
Justin Thomas was just yards away from the GT single game total offense record before taking two losses at the end of the game to run out the clock. George Godsey’s record remained intact. 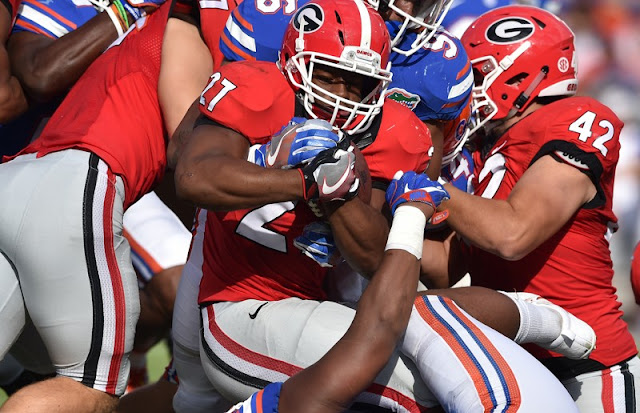 GA/FL: I didn’t see much but listened to some on the radio. Revisionist history: had UGA not suffered that penalty on their first possession and been able to push it in for a TD instead of having to settle for a field goal, AND Florida been held to a field goal on their ensuing possession, the game would’ve been an even closer 20-14. Another game the Dawgs couldn’t establish the running game due to their weak offensive line. Hopefully the running plays aren’t still so slow developing that the defense has time to penetrate into the backfield. And I’m hearing the height-challenged receiving core isn’t helping Eason’s passing game.
This Saturday night’s game against Kentucky will be no cakewalk. UGA might be an underdog. Some fans on the internet have already “given up” on Kirby. Every week it’s the same cycle: despair over a poor performance on Sunday and Monday that’s forgotten before the next game, when in fact due to what we all knew before the season started, every game would be a struggle to win. Makes me wonder how the season would’ve unfolded had Mark Richt still been the coach. Would he have won the games over the weaker opponents (like Vandy)?
Experts like Chuck Oliver (and me) realize this year is a wash. Kirby needs to bring in more recruits, and the O Line needs to get bigger and more talented. Eason is running for his life and learning to the go.

Clemson rose to the occasion to edge FSU. Deshaun threw two interceptions, proving himself susceptible to a good defense. The rest of the way will be much easier for the Tigers, but teams will be gunning for them. South Carolina is improving, and beat Tennessee. Virginia Tech would be no slouch should they advance to the ACC Championship Game. Then a possible New Year’s date with undefeated Michigan before a championship rematch against a formidable Alabama team.
Two loss Auburn trailed at halftime but game back to win. They won’t upset Alabama, but it’s doubtful UGA can beat them.
Tennessee continued their slide, losing to woeful South Carolina. Players are talking about transferring.
Nice to see the Falcons shake off a Green Bay comeback. I wasn’t the only one to detect Troy Aikman’s love affair with Aaron Rodgers. At the end of the game the former Cowboy finally had to admit that Matt Ryan was good as well.
I didn’t see much other football.