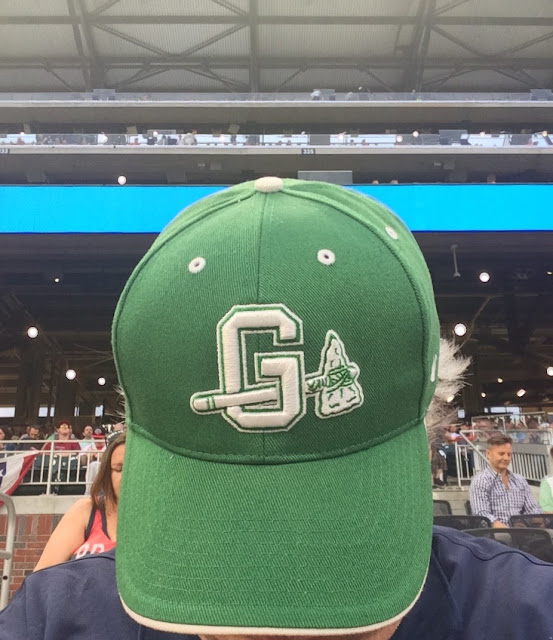 Tuesday I landed some nice tickets to the Braves Nationals game. I’d wanted to get Reid to a game, and this turned out to be a perfect opportunity. At 12:45 I went out for a late lunch with Rodney and Sean at the Medlock Grille. The chicken tenders were crispy on the outside and tender on the inside. Tiny cup of cole slaw. The fries were good, but I didn’t eat most of them. We were finishing up and paid our bill at the table. We were about to leave and looked around. Not only were we the only customers in the restaurant, but there were no employees to be seen either. An eerie feeling.
Got back to work shortly before 2 pm and worked an hour before heading out. Picking up Reid would be tricky, with 85 closed. I’d seen that 285 was already a mess, making 400 south off limits as well. The best option might be Peachtree Industrial south past Lenox Square, but as I headed south from work WSB reported that it too was closed inside the perimeter – a thunderstorm had flooded both PIB and 285 near Northlake Mall. I jumped on 285 for a mile over to 85 south. Cheshire Bridge was crowded but manageable. Made it to Sharondale before 4 pm.
Picked up Reid and took Wesley to Northside to 75 north, to 285 west. Exited at Cobb Parkway and kept right onto Circle 75 Parkway. Made such good time that I feared the parking lot hadn’t opened yet. At first they turned us around, but then let us park. Lot 11 just across the street from the stadium, at 100 Circle 75.
Walked up to the Left Field Gate and snuck up on Crazy Darrell. With plenty of time we circumnavigated the park, noticing the commemorative bricks were grouped in sections named for various Braves players from the 90’s, from Avery to possibly Zuvella. Halfway between the First Base Gate and the Third Base Gate was a section of bricks with the names of Braves players and coaches who had passed away. Should’ve snapped a picture. We didn’t linger, but I noticed Pascual Perez. Next time I’ll have to look for Bobby Dews. 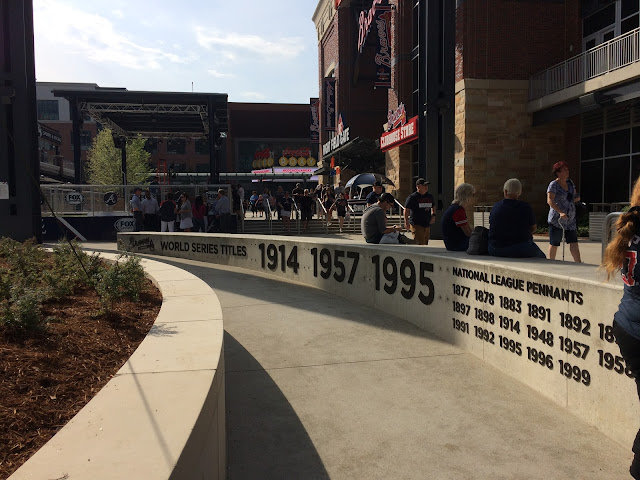 Continued on and made a left at the Roxy, where The Battery began. People were already gathered in the plaza. Kids tossing baseballs in the grass. The sun had come out, but we found a place to sit in the shade. Fellow walked by with sunglasses on. I was pretty sure it was Mark Lemke. Later I saw the Chocolate Papa talking to him, so I knew it was Lemke. Eventually the Chop House Gate opened at 5:30.
The mezzanine was closed off so we meandered counter-clockwise, through the kids area and under the Home Depot Clubhouse. Sat in the top row of the outfield seats as the Nationals limbered up before batting practice. Johnny Pierce came up the steps to greet us. He said some homers in BP were reaching the upper deck in left field. I noticed a guy down front in a number five Braves jersey, with the name “HIGH” on back. Cute.
While we waited for the mezzanine to open we watched Washington take BP. A line drive bounced into the section on stands next to us, that hadn’t opened. There was no one to get the ball. When the mezzanine opened I strolled over and searched the stands for the ball, but couldn’t find it. Checked out the huge, heavy $300.00 three foot long Mizuno glove. Good strategy to let kids check out baseball gloves to wear. There’s nothing like putting on a baseball glove.
We looked for something to eat, and settled on H&K burgers. Seemed like these weren’t as tasty as the one’s I’s had at Turner Field. Greasy and a bun that hadn’t been properly toasted and prepared. But still good. We sat in our seats and watched BP, and everything else going on.

I hustled off to Guest Relations to sign up to be a Designated Driver. This year you get a plastic bracelet and 12 ounce can of Coke (Zero, in my case). Also picked up two magnetic schedules and booklets on the various eateries inside the park. I hadn’t realized that Guest Relations was halfway around the park, in the right field corner, so the trip took longer than I’d expected.
I dashed inside the Braves Clubhouse Store. There are at least three of these stores around the stadium, and this one was small. I was able to use the $10.00 credits from all four tickets to buy a nice fitted New Era spring training navy tomahawk cap. Sweet.
Had to stand at the top of the steps for the National Anthem, so I missed seeing Reid stand when those who’d served in the military were honored. The fellow in the red Braves #11 LOUDERMILK jersey who’d selfishly stood in front of us during BP had thrown out the first pitch. Turned out he was a Cobb County politician whose son is a friend of my co-worker – so I was able to lodge my complaint. 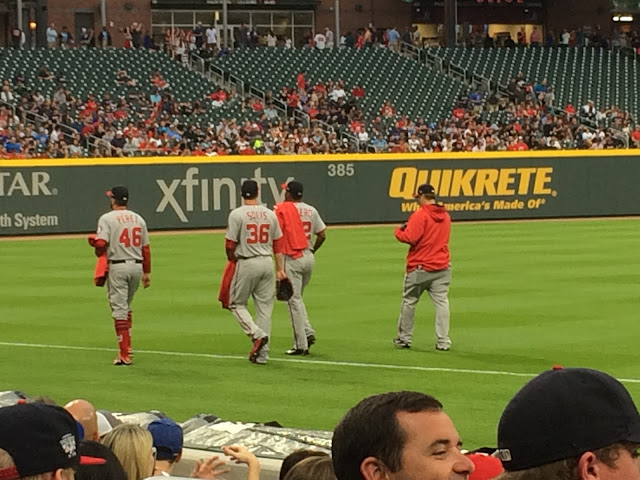