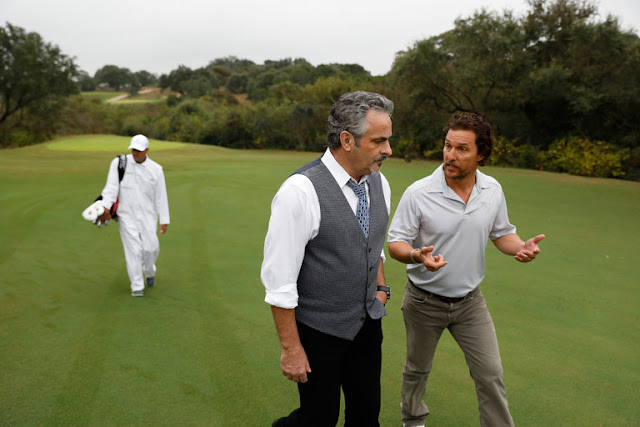 Two hours’ worth of meetings Monday got me behind, plus a bunch of general busyness to boot. Worked til 6:20. Ceil went for a walk with her friend and told me to take my time. Stopped by two thrift stores and Kroger. Passed on a nice pair of black Chuck Taylors. I look terrible in them.

Ceil cooked homemade pizza. Didn’t eat until 8 pm but it was good. Also salad. Cleaned the kitchen and played on my laptop. Watched the Voice.

At 10 pm I saw where actor Matthew McConoughey was on the David Feherty show. Very entertaining. MM’s father played football for Bear Bryant at Kentucky, then was drafted by the Green Bay Packers.

Worked past six again Tuesday night. So much to do. The afternoon was just packed. Dumped some stuff off on Brad and he worked until six. Monday night Rachel worked til six. Had to stop by Kroger to get Ceil some “organic” half & half. Couldn’t find it anywhere. Finally went to Trader Joes to get it. Didn’t get home until after 7:35.
Watched The Middle and The Voice. Then The Middle some more. Couldn’t find the remote so I left the TV on all night. The volume was kinda loud so I closed the door to our bedroom. M was sleeping over at Frank’s house.
The big news: my new Apple Watch delivered Tuesday. C couldn’t wait for me to open it. Spent a decent amount of time setting it up and figuring it out. You think a cell phone is complicated. Right when I was setting it up I started getting all these text messages. They were coming up on my watch, so I was able to reply to the text using my watch. Got a bunch more to learn. More later.
Burgers always sound good. You know hamburger talk kills me. I am going to make an effort to cut down on my consumption of BBQ sauce. Last night for a second I thought we were having burgers. Ceil baked French fries, which we usually only have with burgers or dogs. But instead she had grilled chicken and tossed a salad. While we were helping our plates I didn’t see that she had also cooked green beans.
Wednesday was “administrative professionals” day. There was cake, which I skipped, Some people are got lunch.
Hunter Hill is running for governor. I’ll pass his name around. Probably doesn’t have a chance but is running just to get his name out there. Politicians kill me. I could never be one. Saw where Judson Hill is attending the Karen Handel fund-raiser. Special guest Donald Trump. $5400.00 per couple if you want to go. If you RSVP they’ll tell you where it’s being held.
Tonight after work I attended a men’s event at Johnson Ferry. Crawford Lorritts spoke, the pastor at Fellowship Church in Roswell.
Cheeky – I’m not a fan. Salsa tastes like an ash tray. They opened two Cheeky’s in East Cobb. Both closed.

Email ThisBlogThis!Share to TwitterShare to FacebookShare to Pinterest
Labels: golf