The NFL Network’s top ten quarterback teases. AKA woe are the New York Jets. These shows are good, but I swear they’re only looking for the viewers in New York. Guess that’s where the NFL Network’s rating are highest. Bless their hearts. Even the “experts’ laugh at the picks.
Best of the rest:
Rick Mirer: Notre Dame, Seahawks
AJ Feeley: Eagles, Dolphins
Ken O’Brien: Jets
Brett Farve: Jets. A tease when it came to retiring. Give me a break.
Carson Palmer: Bengals by way of USC. Injury plagued in Cincy. Led Cards to the playoffs. Doesn’t deserve mention here.
10. Mark Sanchez: Jets by way of USC. The butt fumble.
9. Vince Ferragamo: Rams pretty boy (above). Similar to Warren Beatty in Heaven Can Wait. Signed with the CFL, then later returned to the Rams.
8. Bobby Hoying: Eagles by way of Ohio State. Who? Only Eagles fans remember him.
7. Andy Dalton: Bengals. Bashing the redhead after three years in the league. Give me another break.
6. Tim Tebow: Broncos and Jets. Top five college player, but anyone calling themselves a football fan knew Tebow was no NFL QB. So he couldn’t be a tease. But you know the producers added him to spur viewers and discussion. You can’t fault the guy for trying.
5. Richard Todd: Bama and the Jets – just like the guy he replaced: Joe Namath. The guy’s a tease cause he couldn’t replace a New York legend? Perhaps Namath was a bigger tease – winning a Super Bowl and little else. Todd just didn’t have the tools, as one “expert” said. 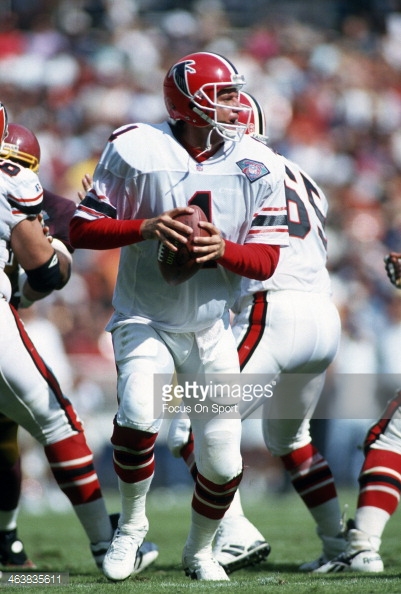 3. Vince Young: Titans and Eagles by way of Texas. Another QB any knowledgeable fan shouldn’t have gone ga ga over. In college a QB can win a national championship and a Heisman being an elusive runner and so-so passer. Successful NFL QB’s must be a pinpoint strong-armed passer. Runner skills only get QB’s hurt. Look at RGIII. Deshaun Watson beware.
2. Elvis Grbac: 49ers, Chiefs, and Ravens, by way of Michigan. Great choice. Career record of 40-30. But lots of guys can play for great teams.
1. Scott Mitchell: Lions (below). Detroit has a long string of failures at QB, like Joey Harrington. Gary Danielson even made the list. Blast from the past. Good pick. Poor Lions. At least they have nice uniforms. Make that used to have nice unis. Rumor is they’re about to get even worse. In an effort to wow young video game-playing males, the button-down NFL have completely forgotten about the blue-collar ticket buying fan base, like in Detroit. The league no longer caters to fans in the stands, but much more to those watching on TV – and on line, and overseas. 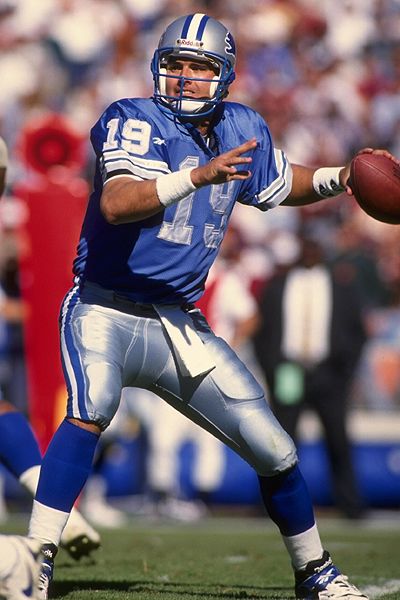 Not mentioned: Colin Kaepernick. Guess they didn’t want the list to be TOO controversial.