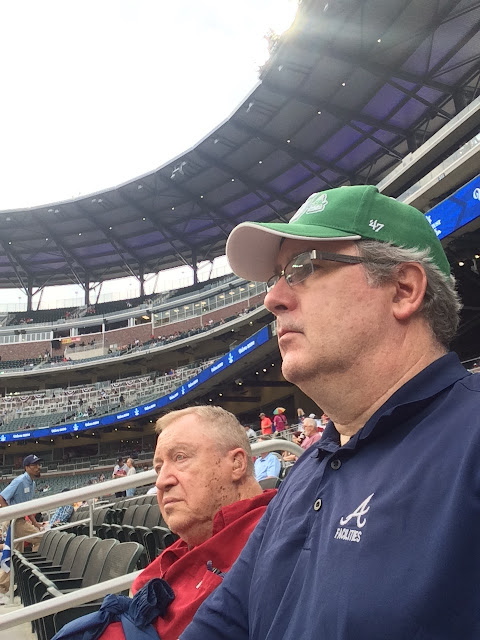 Our aisle, the first past the third base dugout, was used for access to the field for things like that. Nationals coach Chris Speier brought out a handful of bubblegum for on little girl. The little girl who called “PLAY BALL” sat with her sister and father in the front row. During the game each girl was given a ball by a Nationals player. Once Bryce Harper tossed them a ball, only to have a boy - wearing a Bryce Harper jersey – knock it away. Harper walked over to the stands and told the boy to give the ball to the little girl. Later Nats centerfielder Adam Eaton caught the third out, an ran in and gave the ball to the boy in the Nats jersey. By the end of the evening the two girls had collected three baseballs, so one of the girls went looking for another kid to give the ball to. 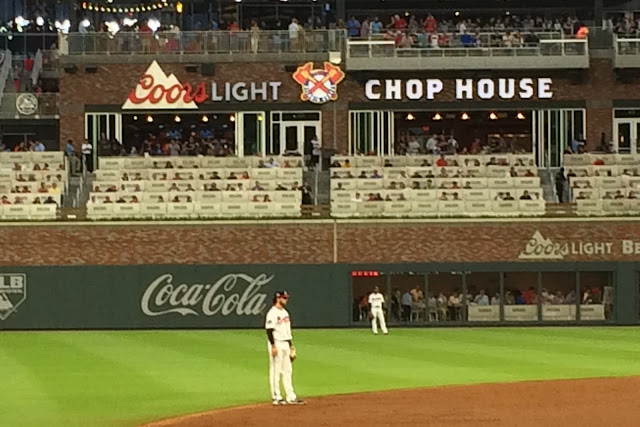 Routine ground ball to short in the top of the first, but Dansby lobbed the throw to first. It bounced. Freddie tried to make the scoop swipe, but the ball bounced away E6. The rest of the night I watched Swanson’s throws. He didn’t overcompensate. Only once did he really have to cut loose, on a ball he had to charge. Now if he can get his hitting back on track, though no shame in getting bested by Matt Scherzer (below). 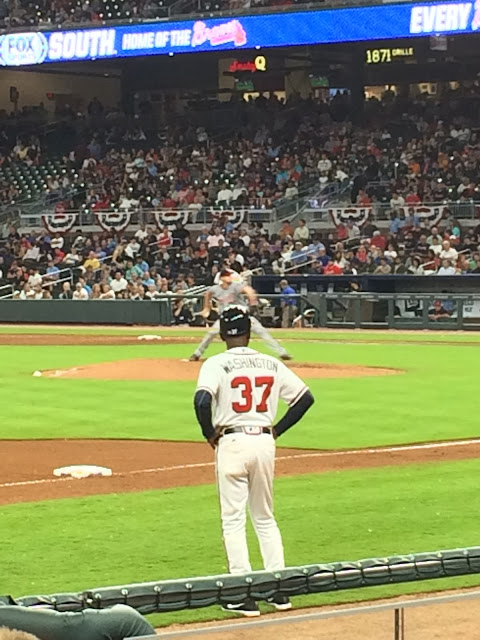 Scherzer kept the Braves bats quiet for most of the night. But red hot Freddie Freeman came into the game hitting .400. He got at least two hits and also walked.
Not an overabundance of nerdowells sneaking down from the cheap seats, though there were a few. I invited fellow bobbleheaders Jon and Corrine down to sit with us. They’d been to every game, so there was a lot to talk about: BP, bobbles, etc. At one point I checked out Jon’s jersey and realized he was the HIGH 5 guy I had seen earlier. 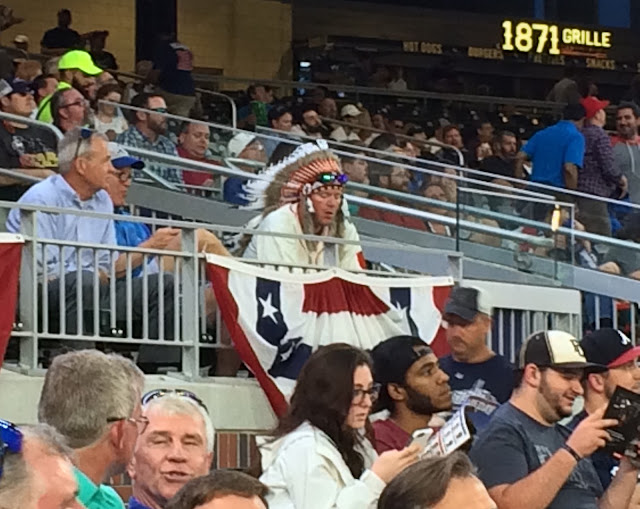 Johnny sat a few rows behind us in section 137. Two teens came down and snatched seats two rows in front of us, bringing shame to the esteemed school emblazoned on their clothing: the Johnson Ferry Christian Academy. I snapped pictures of the miscreants and posted them on social media as friends of the great Thomas Gilbert. The Chocolate Papa held court in centerfield, with his jester Darrell seated nearby.

The Home Depot Tool Race started right in front of us. I could see my green Gwinnett Braves cap on the jumbotron. The race is longer this year. Jon knows the screwdriver. Other between-innings diversions: the kiss cam, the hug cam, the stolen base challenge, and trying to repeat the words of Ender Inciarte.
The 7th-Inning Stretch hadn’t changed much: Take Me Out to the Ballgame followed by a Southern sounding song. Thank God they ditched The Devil Went Down to Georgia, with the redneck wearing a Braves jersey with the sleeves cut off playing violin.
Forgot to take a picture of the retired numbers all in a row: 3, 6, 10, 21, 29, 31, 35, 44, 47. Jackie Robinson’s 42 is displayed on the far right. When I hadn’t seen 42 in some cropped photos I wondered if they Braves decided to not display 42, but they had. Didn’t have time to check out the Braves Hall of Fame and Monument Park, but there will be other games for that.
No baseballs were to be had. Most popups landed a section or two further away. A player tossed a ball to the obligatory Nations fan behind us. Jonathan tried to snatch it but couldn’t. Late in the game Emilio Bonifacio pulled a line drive over our heads. I chose to not reach for it. Jonathan stood and reached, but it was too high. 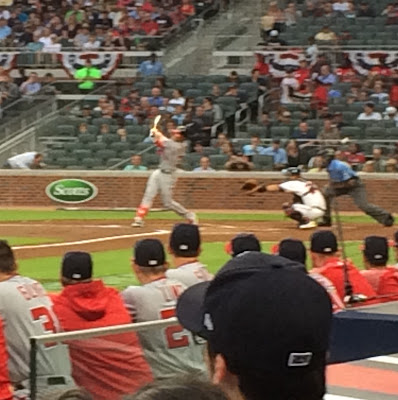 The great Harper legged out two opposite-field doubles, the first on a broken bat poke just out of the reach of the not so mobile third baseman Garcia. Later he hit a hard grounder just inside the third base bag, that rolled into foul territory toward where the stands jutted out. Knowing Harper, I feared he might try for a triple. But the ball grounded straight into the glove of an ignorant fan, who fielded a ball in play. Harper stopped at second without complaint. We watched as the “fan” – and his wife – were escorted out of the part.

Foltynewicz pitched well and added a sacrifice bunt. The Nats have started the season strong, with Harper, Daniel Murphy, and Ryan Zimmerman all batting over .340. The ever-hairy Jason Werth provides protection in the order. Catcher Matt Weiters, a Georgia Tech product, stole third base without a throw. Several missed calls by plate umpire CV Bucknor, particularly high pitches called strikes.
Washington built a 3-0 lead before Atlanta finally rallied in the bottom of the ninth. A bases loaded walk put the winning run on first. Harper made a running catch down the first base line, whirled and fired home. Would’ve been a bang bang play. With two out Chase d’Arnaud battled mightily, fouling off pitch after pitch before swinging at a ball in the dirt. Bucknor timidly raised his hands to signal foul ball.
D’Arnaud slumped his head and headed to the dugout, along with the baserunners and base coaches. The Nats gathered to celebrate the victory as us fans headed for the exits.  Bucknor just stood there. We were halfway to the mezzanine when a buzz filtered through the stands. The umpires were having a discussion. Third base coach Ron Washington had charged over to hold Bucknor to his foul call. The Nats stood around listening. It was decided d’Arnaud had tipped the ball, and the game was not over. Brandon Phillips gestured for Harper to get back in the outfield. We continued toward the exit, but saw the next pitch to d-Arnaud. This time there was no doubt: strike three, game over. Jason Werth charged in from left field and gave Bucknor a piece of his mind.
We made the short walk to my car. Like the stadium, the parking lot was far from full. Traffic wasn’t a problem at all. Took a right out of the lot and drove straight up to Windy Hill, only stopping once. Right onto 75 south to 85 north, looping around the bridge construction at Piedmont. Dropped off Reid and too 400 home, arriving at midnight. A good day.