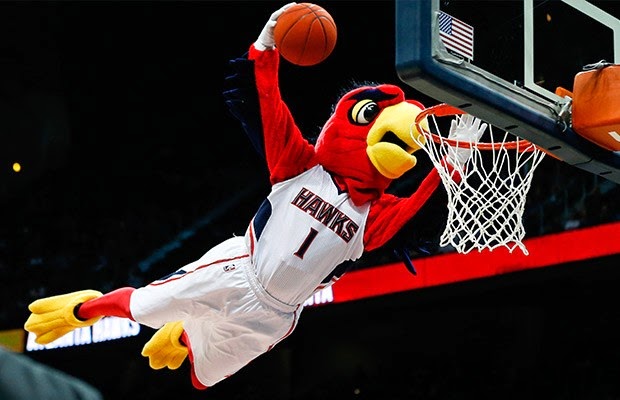 Over a week ago I had decided that when the Hawks lost I would tweet “same old Hawks”. Almost felt bad actually tweeting it. Hopefully if Lang saw it he knew it was a joke. Perhaps having the winning streak end will relieve some pressure and burden, making winning easier.

Worked until 6 pm Friday. Busy day correcting a credit problem in the morning and a heat treat conference call in the afternoon. M had a late guitar lesion in Woodstock, then C had to drive him to the new Avalon to meet his small group. With time to kill I stopped by Wendys and two thrift stores on the way home. Watched some of the Hawks game. I bet lots of bandwagon fans have no idea who Mike Glenn is.

Saturday morning I cleaned upstairs and worked on eBay. Sold five items this weekend. C brought me breakfast: grits and eggs and a hot blueberry muffin just out of the oven. Then I drove M to North Point Mall. Stopped by WalMart on the way home. Later C and A picked up M, shopped at NP and Lenox, and ate at Farm Burger. M went to the Hawks game with friends. I drove out to meet my sister and brother in law near Gwinnett Mall – they’re fixing up two laptops for me. While I was out I stopped by three more stores. Found a nice black long sleeve tee. Back home I watched the NFL Awards show then went to pick up M. The dad that took them said he wished I could’ve gone. M didn’t tell me I was invited!

Sunday morning C went to Grace Midtown with A. Later I took M to the 12:30 service at PCC. That afternoon I hit three more stores and found a nice fishing shirt and Columbia pullover. Got Matthew Zaxbys on the way back. Back home I did the laundry while watching the pregame. C cooked brownies and Will arrived from his Augusta wedding by way of Athens. We all went to the party around the corner. Twelve attended. PaPa Johns pizza, salad, pie, chips and salsa and queso. M and A went home after halftime to study but Ceil, Will, and I stayed to the end.

Crazy Monday. Hit with two emergencies right when I walked in the door. Left work just after six Monday night and caught most of the lights home. Ceil cooked chicken breasts in a crème of mushroom sauce. Good but unhealthy. I skipped the rice but ate carrots. Had some eBay items to package but couldn’t find two of them – Ceil had given away two pair of Anna’s shoes that I had sold. Now I have to give the buyers a credit. M made a big deal about deleting his Facebook account. M has a friend who family lives in a townhouse condo within a pitching wedge from the Pure restaurant in downtown Alpharetta. Evan Gattis lived just a couple of doors down from them.

Wednesday night we have a sales dinner. Not sure where yet. At least I don’t have to go to the two day outside sales meeting. With all the bigwigs in the meeting I will be able to get more actual work done. Did a good job this morning clearing out my in box.

A few months ago I watched a show where they gave tips on how to score high on skee ball. It still required you to roll the ball straight and with the same force every time, which is my problem. I can figure out the strategy. The show also showed how crooks pull off the shell game. That was pretty neat. Also gave do’s and don’ts on how not to be taken by the shell game. When the con asked what shell the pea is under he then makes the switch. But if you pick up the shell before he can move it (and make the switch) then you have him. But the cons don’t like people touching their shells.

Saw an article or two defending the Seahawks play call to pass, and Pete Carroll stood by his man. One report wondered if there was a conspiracy to not let the volatile RB score the winning TD. Supposedly Lynch had been stuffed four times this season when trying to score from the one yard line – out of five tries. No question the ensuing offside penalty hurt Seattle, as well as the fighting penalty. One reporter said you couldn’t call it the worst play call in the history of the universe, because we simply aren’t aware of all the other solar systems.

As great a player as Pete Rose was, I was more a fan of his earlier years. Even as a player his career was similar to young Elvis / old Elvis. Since he retired I’ve become even less a fan. And I’m not big on Sketchers shoes, so the hallway ad wasn’t my favorite. Still, I wouldn’t mind the new commission granting him a pardon and allowing him to be voted into the HOF – as long as Joe Jackson is pardoned as well. Right or wrong it will spur renewed interest and debate. Unfortunately not the interest needed to draw younger fans to the game.

Fans think the Braves need to win 90 to 100 games to make the playoffs. Last year neither World Series team won 90 games. The higher touted a team like the Nats or Dodgers is, the greater the pressure to succeed. In 2013 the pressure got to the Nats and they crumbled. This year the Nats will have to deal with the improved Marlins and Mets as well as the pesky Braves. No pressure on the Braves this year, though some will bemoan every regular season loss like it was the World Series.

We’ve all grown so close to Barney, especially Ceil.

ROB: I really wasn't that surprised by the Hale trade.  I don't think the organization is as high on Hale's potential as many fans are.  Catching depth in the organization is something that needed to be addressed.  In the last 2 years we have gone from McCann-Gattis-BCourt to Gattis-BCourt to now just BCourt.  You can always pick up a veteran retread like Laird or AJ P., but I think they wanted more more talent in the minors.

I saw your "same old Hawks" comment - I am sure there were many people who really said that.  I think it is for the best that the streak is over.  I did not watch the game as I was at Small Group.  I am glad Carroll came back - I think they will really miss Thabo over the next 6+ weeks.  The value of him and Carroll are really underrated.