Break Up the Jackets 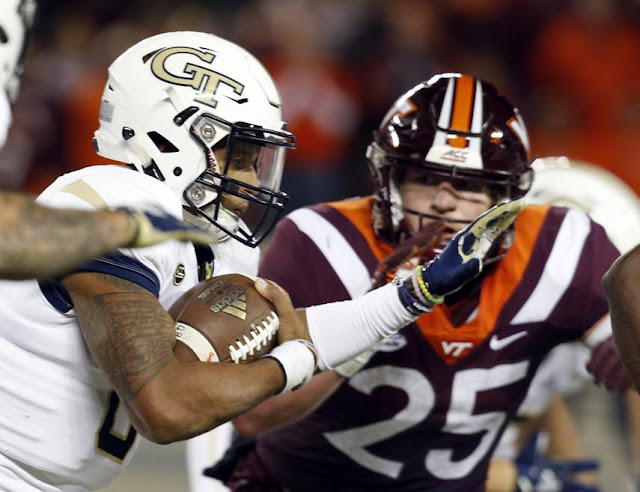 How bout those Jackets. Dominating a team that had previously beaten FSU, Duke, and UNC. The key? The quarterback. Paul Johnson benched the fumbling TaQuon Marshall in favor of his much higher-rated backup. Tobias Oliver responded with 205 yards on 40 carries. Johnson said Oliver didn’t miss an option read all night, part of the game that Marshall had continuously struggled with.
After falling behind 21-14, Tech scored 35 straight points without throwing a pass. I’ve been saying for years that Tech passed too much. Johnson knows a pass play every now and then opens up the run more.
Thursday afternoon on AM680 college football expert Chuck Oliver told how before last season Tech lost four QB’s to injury or transfer. Johnson told running back TaQuon Marshall that he was the QB. Marshall is fast and fearless, but executing correct option reads against Division One opponents ain’t easy. In high school Oliver started at QB for three years, setting passing and rushing records at 5A Northside Warner Robins. 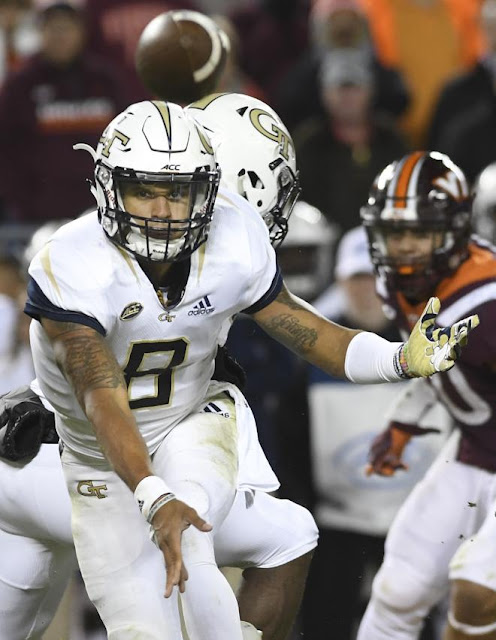 Can Tech get into a bowl? That fumbled-away loss to Duke hurts. They’ll have to win two of the next four. UNC is winnable. Beating 5-2 Miami would be tough. Virginia is also 5-2 and beat the Jackets last year in Charlottesville. But if Tech puts together a decent game there’s no reason they can’t beat UVA at home.
Without Brian Finneran in the studio to keep them grounded, Steak and Sandra went off the rails bashing the Bulldogs. They keep saying Justin Fields needs to play more for UGA to bolster its offense, and to keep Fields from transferring. Or that if Fields plays well Fromm might transfer. Nonsense. Fields has a great arm but can’t read coverages like Fromm (few can). If Fields transfers after one season it’s because he never should’ve committed to Georgia in the first place.
Steak and Sandra think Fields will play more. Buck Belue doesn’t. I’m with Buck. Fields will play some but not half the game. Hopefully Kirby has drilled into offensive coordinator Jim Chaney’s head to run more. Steak and Sandra say the Dawgs are more talented than Florida, that the Bulldog defense will contain the less talented Gator offense, that Florida has a hard time stopping the run. They say those things and then should Georgia lose they can act all surprised like they thought Georgia would win big (Steak predicted 35-17).
But based on how LSU and Missouri moved the ball on the Dawg D, and since offensive genius Dan Mullen has Feliepe Franks and the Gator receivers operating better than ever, there’s no reason to think Florida won’t move the ball on Georgia. If Georgia doesn’t pound and pound and pound and even if they do) this game could come down to a Blankenship field goal at the end.
Since Sports Illustrated changed its format from weekly to twice monthly they don’t cover big games or surprise teams any more. Almost nothing on the Braves all season. They devoted one page to two rounds of baseball playoffs. So gone are the covers of current newsworthy players, and thus my go-to place to steal cool pictures for this weekly segment. But considering the liberal, political stance SI has taken on in its struggle to remain relevant and attract a younger audience, perhaps it’s time for this old-timer to cancel my subscription of 35 years.