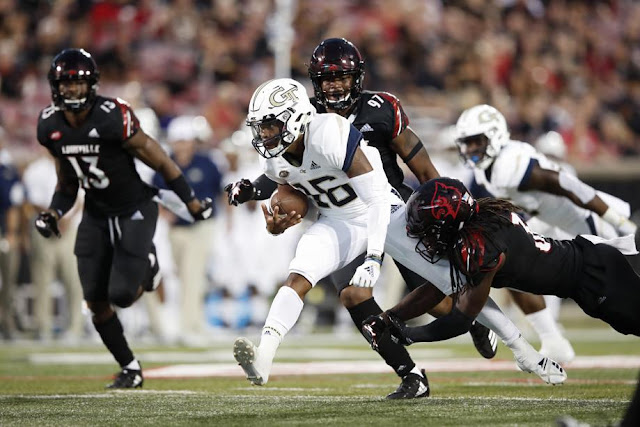 I was shocked Tech won so big, but not surprised the Tech defense gave up 31 points. Would’ve been more had Tech not intercepted that pass. Before the season and after the first game Drew Kelly was crowing on social media about Tech’s new defensive coordinator, who came from his alma mater Wofford by way of Appalachian State. I’m not impressed. Tech is averaging what, 45 points a game, and they’re 3-3. Only team in years to score 36+ points in two straight games, and lose both games. Duke comes to town on Saturday, and there’s a good chance GT could lose.
Tech didn’t punt. They scored on all nine possessions. TaQuon had a big game. Backup Oliver broke off a 65 yard run (below). Didn’t turn the ball over. Louisville is bad – on both offense and defense. Poor QB play by the Cardinals. Over 540 yards rushing for Tech, the second most ever under Johnson at Tech. Tech only passed twice, completing one. Least number of passes since the famous 1976 homecoming upset of Notre Dame, when the Jackets didn’t pass at all. 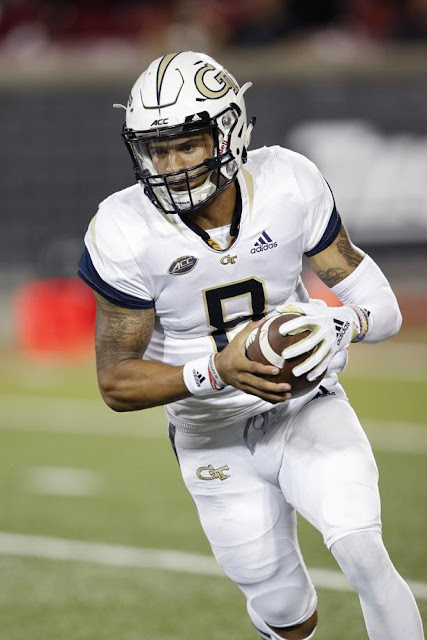 Some say Paul Johnson turned on the gas as a get back at Louisville defensive coordinator Brian Van Gorder, who succeeded Johnson at Georgia Southern. When Van Gorder took the helm he ditched Johnson’s option, calling it an antiquated offense. Hey a week or two ago, back in September did you read Mark Bradley’s column about Paul Johnson? He came to the conclusion that maybe Tech can do no better than Johnson, considering he has been one of the most successful coaches since Heisman and Dodd. Bradley is probably right. What top young coach would want to come to Tech? Plus most of the other ACC schools have upgraded their coaches in recent years: Virginia, Virginia Tech, Miami, and others. The conference has become more competitive.
A humble Nick Fitzgerald broke Tim Tebow’s SEC career rushing record for QB’s. Stidham missed an open receiver. Auburn ain’t looking good. 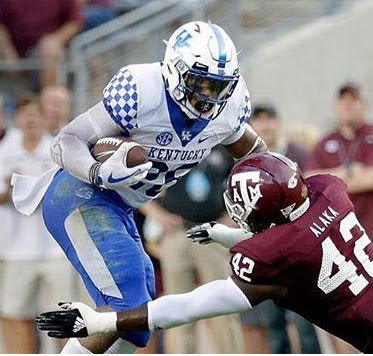 As expected, Kentucky fell from the ranks from the unbeatens. Running back benny Snell had a whirlybird mouthpiece that twirled whenever he breathed. The Wildcats had a chance in OT, but the QB took a sack, and the kicker came up short on a 43 yard field goal. 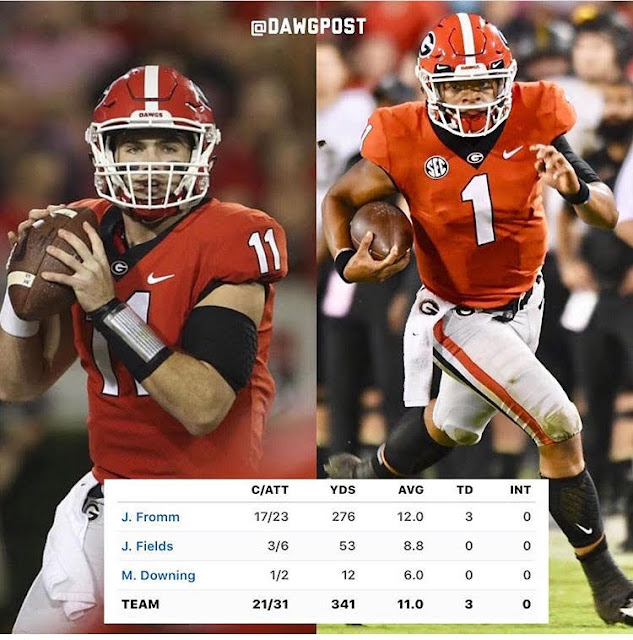 Both Fromm and Fields played well. Jake threw for a career high, including a 75 yarder to senior Terry Godwin. Swift finally had a breakout game, and perhaps has now fully recovered from his groin injury. Swift, Holyfield, Herrien, Godwin, and Ridley scored. Cook had a long touchdown run called back. Vandy called time with six seconds remaining and scored a meaningless touchdown as time expired.
Rodrigo nailed a 53 yarder. He became Georgia’s all-time leader in consecutive extra points. 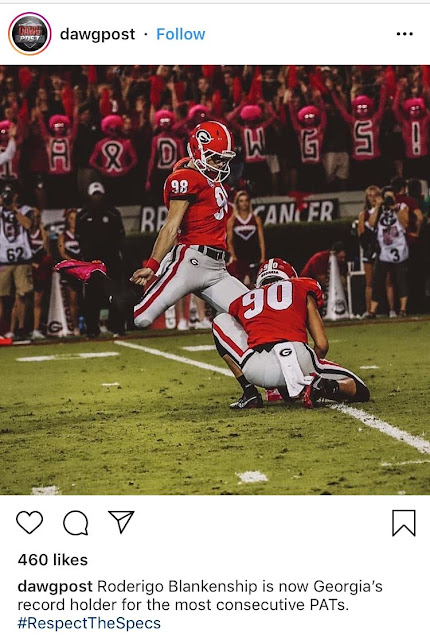 Some say Vandy would be a better fit in the ACC. But they might be a better team because they’re in the SEC. If they moved to the ACC they’d have the temptation to not try so hard. As it is Vandy would be a top tier ACC team, still several notches below Clemson. The Tigers would be a better fit for the SEC, but I’m sure they’re happy dominating the ACC. Gives them all year to tune up for the playoffs. Some think the ACC is so weak this year that an undefeated Clemson team might still be on the outside of the playoff, looking in. Especially if there are four other undefeated teams remaining. 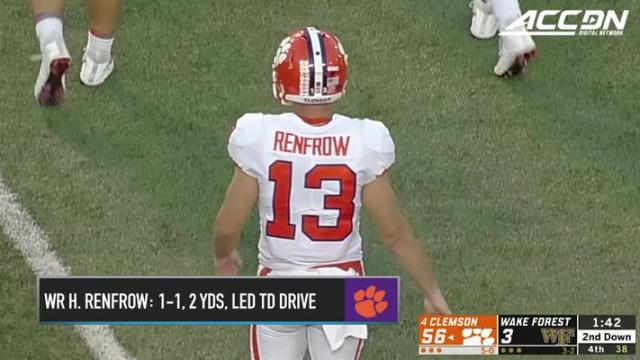 Clemson put up 65, but only seven in the first quarter. Wake’s defense couldn’t stop the run. Dabo gave his son a chance to run the ball and return a punt, and let emergency QB Hunter Renfrow take a few snaps from the shotgun. Hunter also caught several passes and booted a 42 yard punt.
FSU has really gone downhill. Some say Jimbo jumped to A&M because he knew this year was going to be bad. 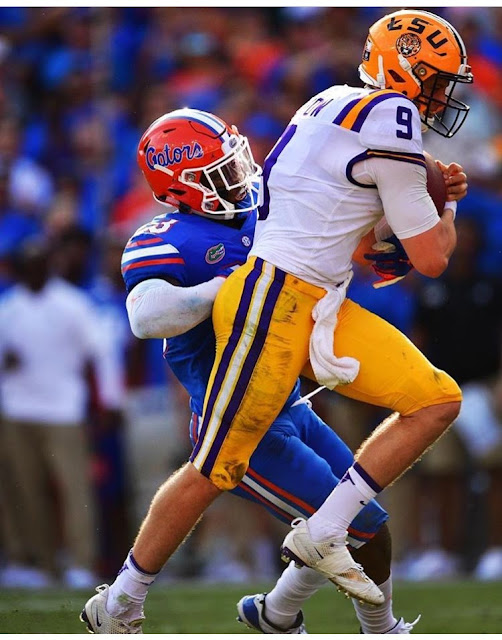 LSU also lost, making them hungrier to win next Saturday in Baton Rouge. The Dawgs were called for several pass interference penalties, which could haunt them should they do the same next week. Kirby was livid in his post-game press conference, calling his team undisciplined.
Gamecocks got lucky, outkicking Mizzou to win a soggy, lightning-delayed marathon.
Bama put up 65 on Arkansas, but gave up a season high 31. Unlike Clemson and Georgia, the Tide scored early and often. Both Tua and Hurts had big plays.
Ole Miss put up 70 points, and gained over 800 yards – the second most in SEC history.
Indiana played Ohio State tough. Oklahoma lost the Red River Rivalry to Texas. Longhorns fans are thinking they could sneak into the Playoff ahead of the Irish, who struggled against Virginia Tech.
With five key defenders out with injuries, the Falcons looked hapless in Pittsburgh. Take back the blocked punt and sack/fumble of Ryan in the end zone, and it’s a little closer. Maybe next year.
Kicker Graham Gano of the Panthers kicked a game-winning 63 yard field goal, tying for the second-longest in NFL history. 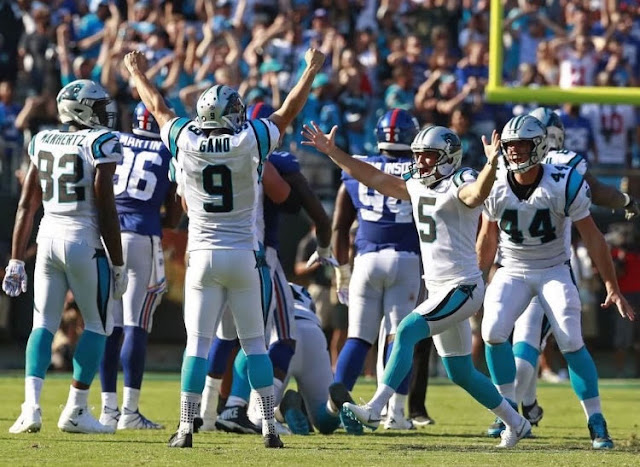 I’m not as good at convincing people of stuff. I get lucky sometimes. Will is better than me but not in others class. There are some real smooth talkers in the bobblehead group. Sometimes they just can’t help themselves.