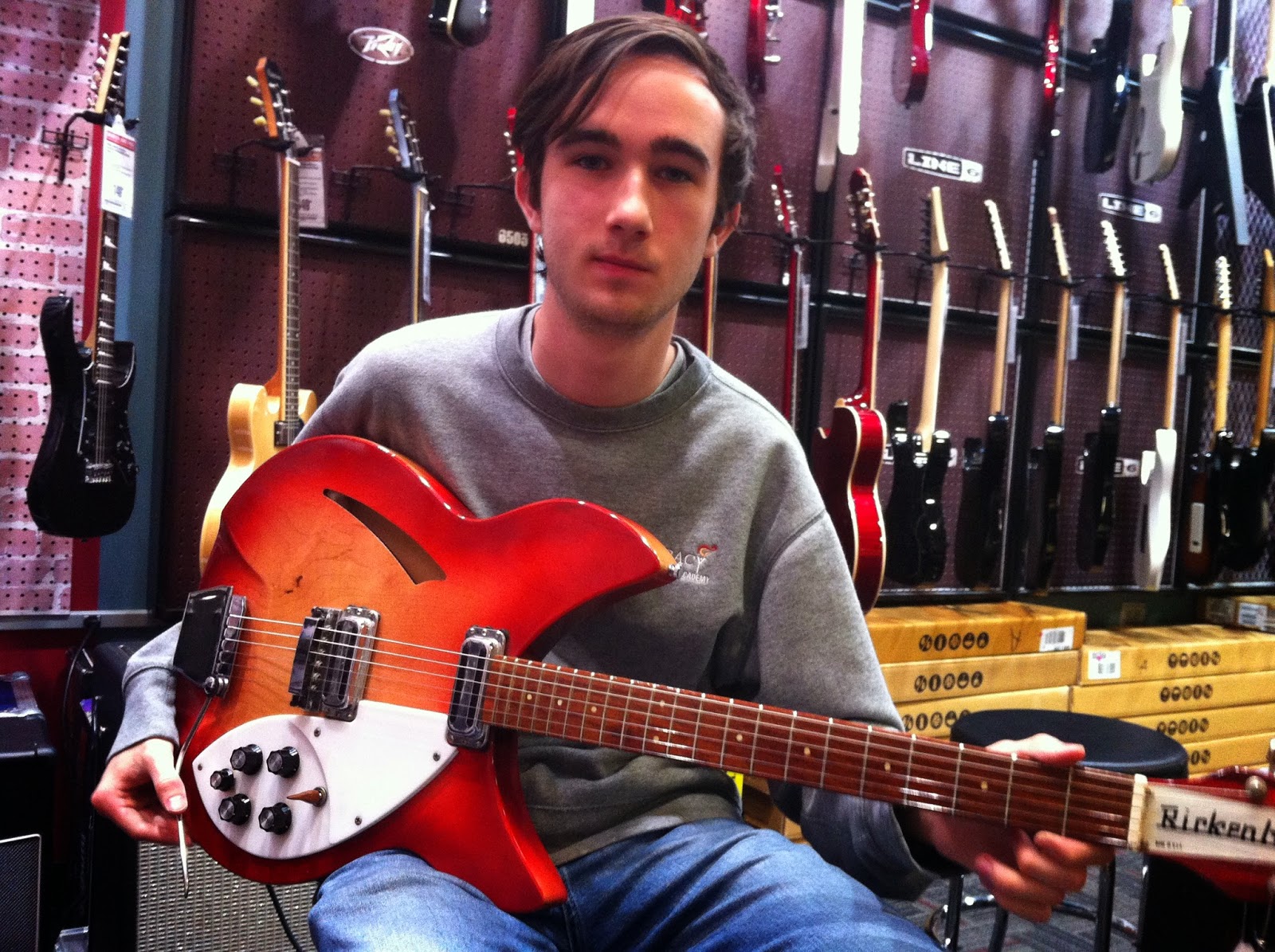 Found this picture of Matthew on the computer. His Christmas present this year was a huge amplifier to go with his electric guitar.

Tuesday night I cooked turkey sandwiches on the panini press. Cleaned out the fridge and did the dishes. Worked on the computer and watched The Book of Manning on ESPN Classic. Also Letterman reviewing the latest toys...always a fun bit. He hopped on a mini motorcycle and rode outside and down the street into traffic. Also watched One Direction on Jimmy Fallon. Couldn't sleep due to worry about Christmas bills...or maybe it was the caffeine I drank before bed.

Got up early Wednesday morning and cleaned more. Will arrived from Cartersville. We loaded the car, swung by Perimeter Mall and Bass Pro Shop. Took 316 to Athens, then south to Madison. I had heard a 1960s era laughing Indian bobblehead was spotted in an antique store. We had a good time looking but couldn't find it. Saw a babushka nesting doll of Bill Clinton, Monica Lewinski, and several other Clinton girlfriends. Next stop was Chickfila.

Not long after we arrived everyone left for the Christmas Eve service. I wasn't dressed, so I stayed with Dick and Zane and Beau and Grant. They had to leave so I fixed a chicken salad sandwich and took a short nap. When everyone got home we had spaghetti and meat sauce. Love the meaty meat sauce.

On the drive over Wednesday I realized that I failed to consult the Saragin ratings when I made my bowl picks. Last year that was my secret weapon. Arrived in SC and learned about Central Michigan's big comeback. Thought I had lost another game. Thank goodness they went for two.

Based on their performance in the first half I don't see how Fresno State got bowl eligible. Looks like they recruited a tall guy who looked like a QB but who actually can't play. Bet they have a short slow QB on the bench who can really play. But based on several earlier bowl games, the second half could turn out completely different (it didn't).

Anna was driving her grandmother's old Mercedes and ran over a median - messing up two of the wheels. Same thing happened to me once, so what could I say. Not sure who was in the car with her when it happened. With the holidays no one was open to get new wheels until this next Monday.
Friday Ceil drove Anna and her thee girl cousins to Charlotte to shop. No room for Will, who didn't have anything to do. Matthew didn't wake up until after she left, and he was in a bad mood as well. I took M to get something to eat to get him out of the house. I wasn't hungry but M got Bojangles. Then we drove to Matthews NC to get something he needed at Guitar Center. Will felt left out.Saturday we got up early and pulled out at 7:20 am. Got biscuits at the Camden CFA and didn't stop after that. Made good time and arrived home before noon. Will took a shower and headed out to Cartersville. I showered and ran errands from 3 - 6 pm: (1) The Avenue East Cobb (2) gassed up the Civic (3) Dunwoody Goodwill (4) Perimeter Mall (5) Lenox Square (6) Buckhead Goodwill (7) Sandy Springs Goodwill and (7) Kroger. Traffic was gridlocked all around Lenox but I was lucky enough to find someone leaving near Bloomingdales to give me their space.After Friday I was kinda footballed out so I rented two movies: And So It Goes, with Michael Douglas and Diane Keaton - a Rob Reiner film. Panned by critics, but I liked it. Seemed short - only 94 minutes. Also rented Left Behind, the latest Nicolas Cage version of the best-selling book. Ceil has really been into movies lately.My bowl picks continue to go downhill. Where do you want to eat? Last night Ceil was cheering for NC State and I told her she needed to cheer for UCF. Virginia Tech played bad all year (except against Ohio State) but played well today. Penn State's Christian Hackenberg had the 100th best QB Rating and Boston College's Tyler Murphy was top 20 - a candidate for ACC player of the year. Yet the teams went to overtime. The Whitakers weren't the only one to have his bestselling author/son home for the holidays. Bob and Myra were hosting Charles and Karen.

Last week Nike and Mississippi State unveiled the Bulldogs' special white Orange Bowl uniforms to the national and local media. This means GT is wearing dark jerseys, after having a very successful season wearing white jerseys in all 13 games. There are rumors that Tech will be wearing gold jerseys. You'd think lowly Russell Athletics and GT would take advantage of the national media to bring attention to their brand by unveiling the gold bowl jerseys in advance, but instead they're keeping it a big secret. Probably because the jerseys will look terrible compared to MSU's.

I picked SC to beat Miami. Now a SC WR quit the team. Wondering if I should change my pick.

Jerry Seinfeld is looking more and more like Matt Lauer.