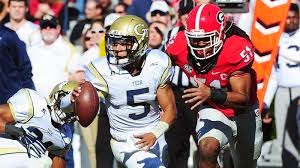 Why? Quarterback Justin Thomas. He runs the option better than any of his predecessors, and can pass better than them as well. In his first full season Thomas has led the Jackets to the ACC Coastal Division Championship and an Orange Bowl berth. There’s no reason the next two years shouldn’t be just as successful. Had the defense gelled two games earlier Tech could very well have been undefeated and playing for a berth in the four team national championship playoff.

For this reason, and his superior stats, Thomas should be named the ACC Player of the Year and first team All ACC quarterback. Tyler Murphy had comparable statistics for 7-5 Boston College, who finished fourth in the Atlantic Division. Thomas had a higher rating (154 to 125), was sacked fewer times (9 to 20), threw for more touchdowns (16 to 11), was intercepted less (4 to 10), and had a higher yards per attempt average (9.07 to 7.23). With Thomas under center Tech finished higher nationally rushing (4th vs 14th), passing (122nd vs 123rd), and scoring (17th vs 85th). 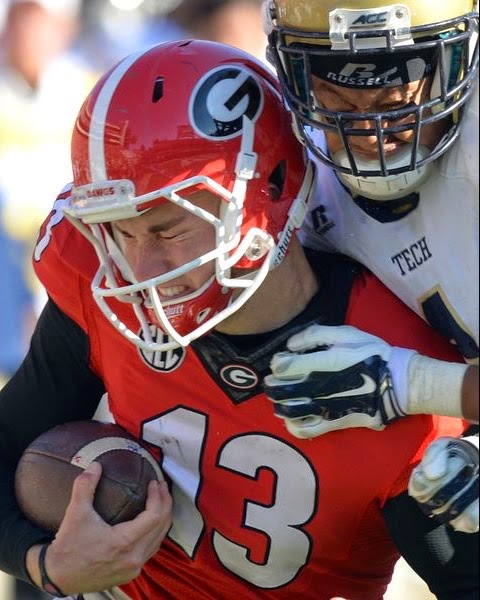 More thoughts from Saturday’s game: Tech had to play perfect to win. Instead they made numerous mistakes, but benefitted from even more mistakes from the Georgia side. In general both defenses took away the big play. Both D’s allowed one long drive after another, but strengthened in the red zone. Dawg fans complain about the failure to cover Tech’s pooch kick, but that did not factor in the outcome of the game - Tech fumbled three plays later.

Georgia would’ve won if any one of the following five plays had gone their way:
1. Chubb’s fumble on the one yard line.
2. Michel’s fumble on the one yard line.
3. Pooch kickoff with 18 seconds remaining.
4. Mason’s interception in overtime.
5. Timeout called with 4 seconds left on the play clock – even though Tech’s field goal team was not ready to snap the ball. A delay of game penalty would’ve put Butker’s game-tying field goal attempt out of reach. Had UGA managed the ball better they could’ve easily won 31-21, if not 31-21.

Tech needed all five of the above UGA miscues to win. The Jackets won despite two terrible calls by referees: a late goal line whistle (and possible GT touchdown) turned into a 98 yard fumble recovery touchdown for UGA DB Damien Swann. They won despite two inexplicable play calls late in the fourth quarter. After recovering the pooch kickoff deep in Georgia territory, Tech had a golden opportunity to (1) run clock and (2) put the game away with another score. They did neither. UGA called timeout after stuffing a Laskey dive. On second down Thomas scrambled, losing three yards in an effort to run out the clock. UGA called time out again. On third and 11 Johnson called for another scramble, and Thomas dropped the ball while his arm moved forward in a throwing motion. What should’ve been called an incomplete pass was instead ruled a fumble recovery for Georgia. Thomas hung his head, but in my book wasn’t to blame – Johnson was. Then Thomas’ clutch 21 yard scramble put Tech in position for the tying field goal.

In their joy some Tech fans proclaimed the Jackets a better team than Georgia. On Saturday they were. Tech may currently be playing their best football since the 1990 national championship season, but if they played Georgia ten times, I’d have to think UGA would win seven or eight. The Dawgs themselves were just three or four plays away from an unbeaten season, yet losses to rivals South Carolina, Florida, and Georgia Tech have prompted more “Fire Richt” cries. Who could they get that’s better? Aside from Saban or maybe Urban Meyer (neither are moving to Athens) I know of no better coach. Malzahn had one good year, then flopped. Mullen’s team faded. Notre Dame proved to be a patsy. Baylor’s run & shoot wouldn’t work in the SEC. Much better to stick with Richt.

With the talent UGA has coming back, plus another top rated recruiting class, 2015 could be a huge year for the Dawgs. Next year’s GT/GA game could be a battle of the unbeatens. Then Georgia would then face another top Alabama team in the 2015 SEC Championship game. You heard it here first.

I mostly agree with your post. A couple of arguable points:
1) The D was not the problem in the Duke game. Thomas had a bad game. What was it 3 INTs?
2) I don't think you are giving the Tech D enough credit with regard to your "plays that could have gone uga's way". It wasn't a bad break for the puppies, the D absolutely won caused all three turnovers.
3) While Thomas's first fumble was absolutely a case of the ref just swallowing his whistle, the second was a fumble. He was trying to pump fake that ball. It was not a forward pass gone bad.
4)No way to predict the out come of a "Best of 10" between these two teams. I would not give the puppies that much credit.
5) Tech's recovered kick off was a "pooch kick." uga's last kick was a "squib kick" not a pooch.

Thanks for the comment. You make some valid points.

2. The GT D is coming up big, especially these last two games. Hope they can keep it up Saturday night, and force more turnovers.

3. Obviously Thomas' fumble was just that. I was looking at the play through gold colored glasses.

5. I'll take your word on the definitions of each kind of kick.

What hasn't been said is the difference between this year's game and last years. Tons of improvement by GT. As I said, no reason this success cannot be repeated in 2015 and 2016.