GT/GA: The Jaws of Victory 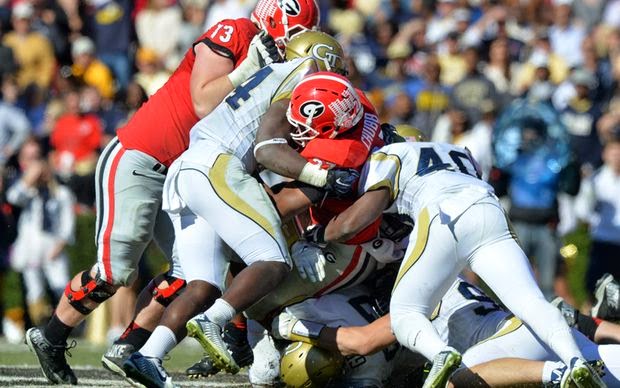 As the game played out, all this proved to be true. What I had not predicted were two things: UGA would twice fumble on the one yard line (the clear difference in the game) and Paul Johnson would do his best to snatch defeat from the jaws of victory.

Down a mere seven points in the first quarter, Johnson began calling more passing plays. He should have mixed it up on the ground. UGA might’ve been stuffing the run on the outside, but they’d had success running up the middle – particularly when Laskey finally entered the game. Smelter’s knee was twisted by a UGA DB after he was down, and GT had to settle for a field goal attempt. Harrison Butker took his sweet time and the kick was blocked. Whatever momentum Tech had built driving down the field was lost.

Despite Johnson’s early abandonment of the running game, GT once again drove down the field for a game-tying touchdown just before the half – after a SECOND fumble recovery on the one yard line.

In the second half penalties continued to hound Tech. Needing to play a perfect game to have a chance, the Jackets drew penalties on two of the first three plays of the half. Even the announcers knew Laskey was quicker than Days (who was fortunate to not lose his fumble). This pronouncement would prove to be a game-changer.


With Tech poised to go up 14-7, Thomas’ apparent touchdown turned into a 98 yard fumble return TD for UGA’s Damien Swann – because the whistle had not yet been blown. Horrible call by the officials. Also a horrible call by Johnson – he should’ve had goal line QB Tim Byerly in the game on the first and goal. Momentum continued to swing UGA’s way on the ensuing kickoff when Golden foolishly ran it out of the end zone. An illegal motion penalty, no gain by Days, dropped pass, incompletion, poor punt, dropped interception - GT was in full self-destruct mode.
But somehow Tech stopped UGA, blocked a field goal, and marched down the field for a game-tying Laskey touchdown. Could’ve been 24-7 Tech or 28-14 Georgia.

In the fourth quarter GT stopped UGA again – only to have a fake field goal give the Dawgs a first and goal. On the tackle the GT defender almost took Marshal Morgan’s head off – but again no call by the inept officiating crew. Georgia was unable to score on five tries, and had to settle for a field goal.  And GT drives 13 plays 13 plays 80 yards 6:51 off the clock to take the lead on ANOTHER Laskey TD run, with four minutes remaining.

While UGA failed to cover the ensuing kick, GT failed to hold onto the ball. Instead of continuing to run up the middle Johnson had Thomas run around in the backfield, taking two straight losses. The replay clearly showed Thomas’ arm moving forward in a throwing motion, but again the officials made the wrong call. Georgia went down to the wire (another 4th & goal) but scored the go-ahead TD on a Mason to Marshall toss.


Thomas scrambled 21 yards and ran out of bounds with four seconds left. The next sequence would decide the game. The play clock started, but the field goal unit took its time setting up. UGA called time out with four seconds remaining on the play clock - though it was obvious Tech would not snap the ball before the play clock ran out. Even if Tech had snapped the ball, the inconsistent Butker would've never made a rushed kick. As it was, Butker’s 53 yard field goal barely made it over the cross bar.

Butker celebrated like he had won the game, when in fact he would soon be called on again with the game on the line. Sure enough, after Laskey scored his third TD of the game, Butker’s all-important point after was blocked. Typical Tech. Only DJ White’s game-winning pass interception saved the Jackets from defeat.

Immediately after the game the very UGA fans who last year were so quick to rub in their win mysteriously disappeared off social media. Tech fans celebrated, but not obnoxiously.

SC/CLEMSON: On the other channel, Clemson and Deshaun Watson had tied Carolina – then went ahead 21-7 before the freshman’s knee gave out. Instead of running out the clock, much-maligned backup Cole Stoudt threw an interception. The resulting field goal cut the lead to 21-10.

Watson returned in the second half and upped the score to 28-10 – and stopped SC on a fourth and goal. With the momentum, Clemson went on to a decisive victory.

KY/LOU: needing a Kentucky win to enhance Tech’s Orange Bowl chances, the Wildcats jumped out to an early lead. Louisville came back to take a 21-20 halftime lead and win the game in a squeaker. Should Tech lose next week, these wins by Louisville and Clemson could bode bad for Tech's Orange Bowl hopes.

MICHIGAN/OHIO STATE: the underdog Wolverines jumped out to a 14-0 lead, but the Buckeyes were able to tie the game at the half – and cruise to a 42-28 victory despite losing their QB. Oh how I hope they don’t jump into the top four.