Adventures by the Lake 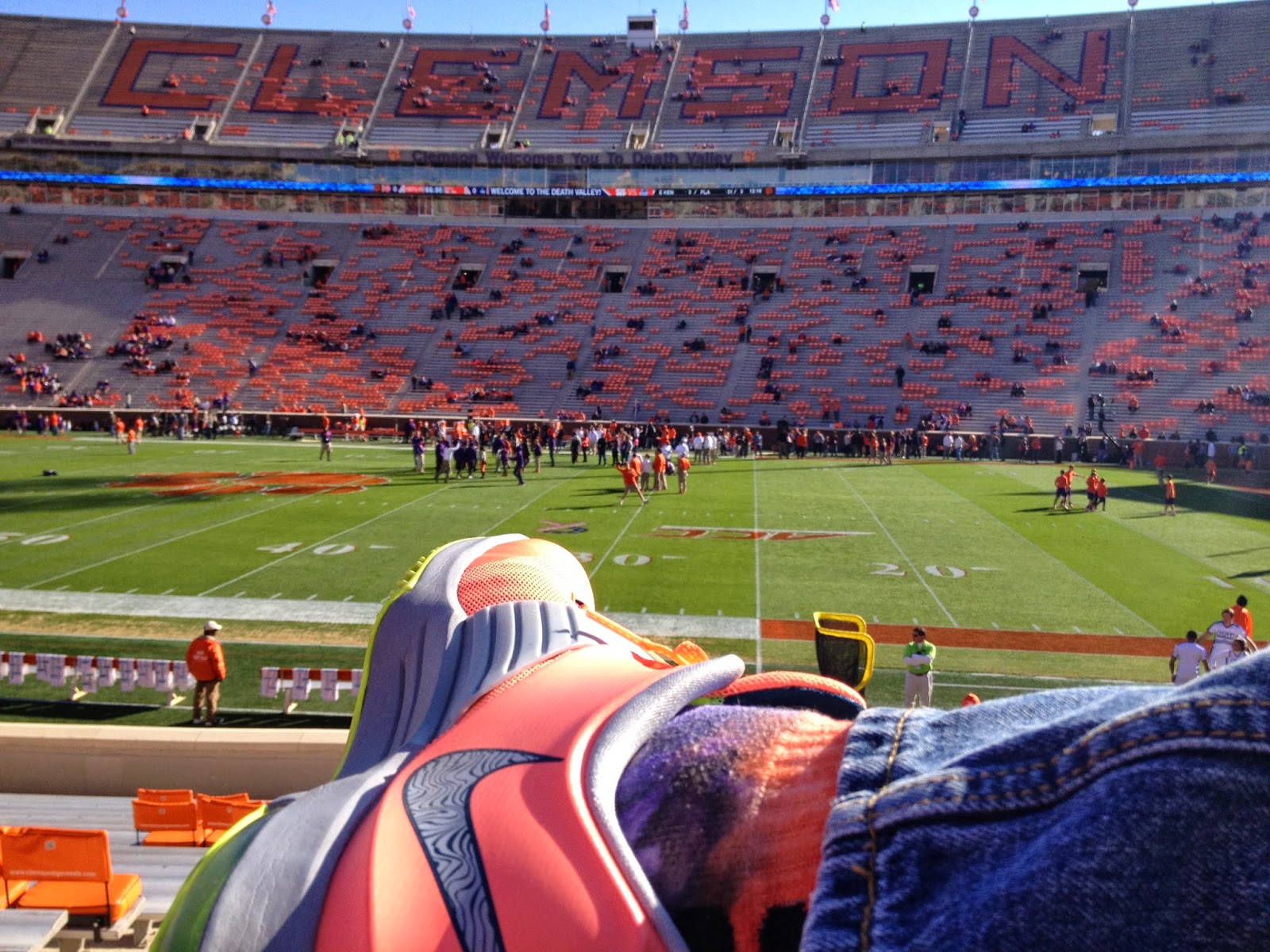 Ceil picked me up at work on Friday at 3:45 and we beat traffic out of town. Showed her mother the Sugarloaf Country Club, where some PGA events take place. Made it to the new Holiday Inn Express in Clemson just before cousin Phil. The eleven of us ate across the street at McAllister’s Deli – a turkey melt and potato salad. After hanging around the hotel Phil and I took the kids over to Vic’s apartment. I was fast asleep when M knocked on the door at 1:30 am.

Met Phil and Rusty downstairs for breakfast early Saturday morning. Drove out to Jackson’s condo to pick up tickets and pick up tailgate supplies from BI-LO. Phil’s beer was on sale super cheap ($9.99 for 24 cans). I almost bought some for myself (joke). 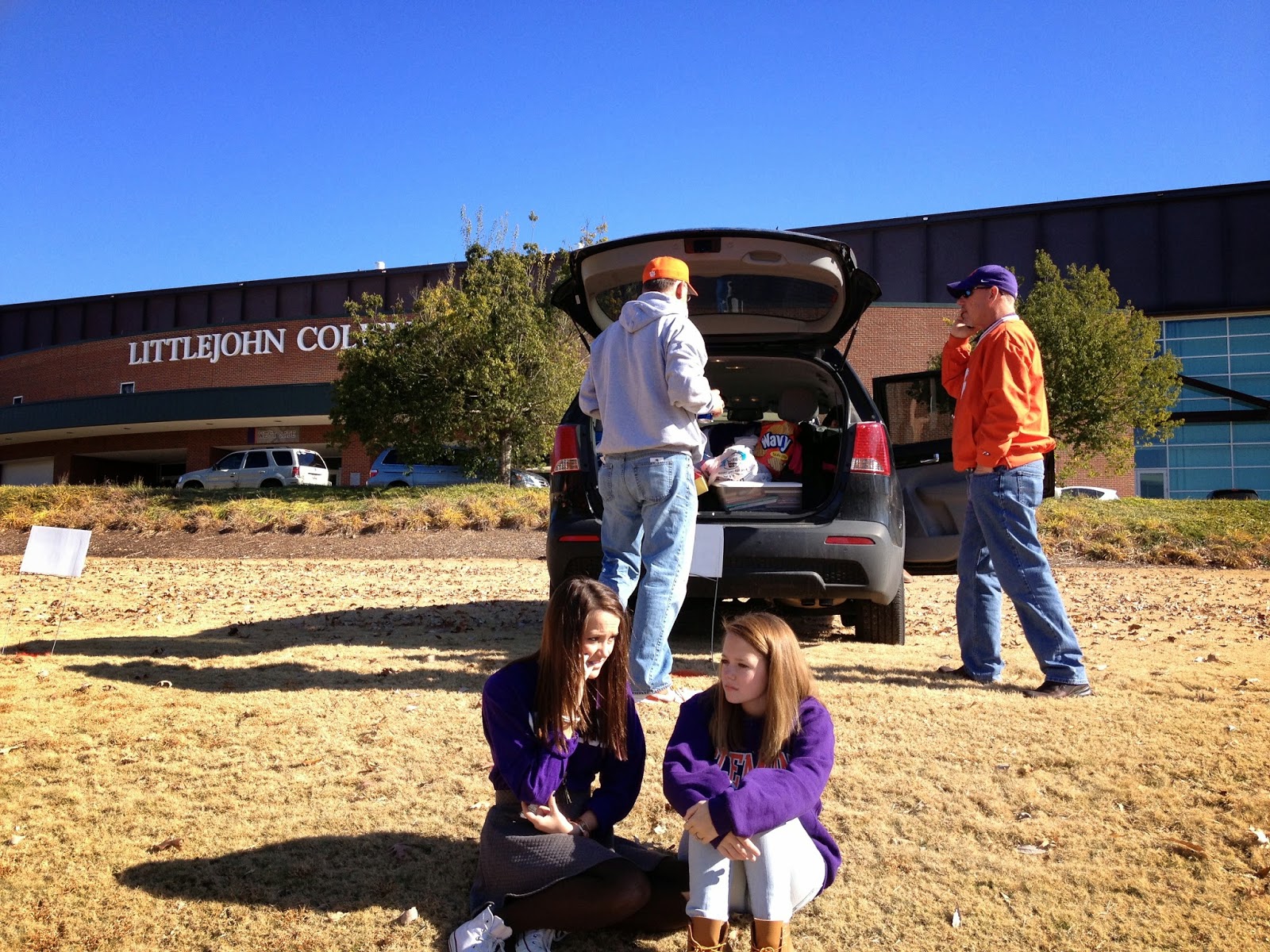 Left the hotel at 11 am and tailgated next to Littlejohn Coliseum, across from the athletic offices. Ate chicken tenders on King Hawaiian rolls, chips and salsa and onion dip, and Chips Ahoy chocolate chip cookies. Had non-diet Pepsi and Mtn Dew to drink. Ali brought one packet of Chickfila sauce. Walked down to the football practice fields to visit Beau’s tailgate. Missed the Tiger walk.

Rusty loves to get to the stadium early to watch the warm-ups, which was fine with me. A GSU fan was yelling at Clemson QB Cole Stoudt, giving him the business. Saw nephew Ben help with warm-ups. Anna sat with their cousins in the end zone, near where the Tigers run down the hill. In the second half M would join them.

Infrequent game-goers Phil and I broke out the orange for the game. I wore my orange Nike KD basketball shoes (Beau’s friend complimented me on them). During the game I was squeezed in next to tobacco-spittin’ Phil, and I had little footroom to shield my KD’s from the spray. They didn’t get too dirty (wearing them in Sunday’s rain actually cleaned off the neon yellow soles) but when I got home I cleaned them again. Also wore my sweet Nike Clemson coach’s jacket. Bought it five years ago at a thrift store, and got to wear it for the first time. Phil and I were in orange, but 60% of the crowd bought into the “purple out” – wearing purple to match the team’s purple jerseys and pants. GSU broke out a new black alternate helmet.

Since it was senior day each senior came down the hill individually, and then posed for a picture with Dabo. After Army vet WR Daniel Rodriquez had his picture taken I noticed he backtracked to the goalpost, then back up the hill. Since it was military appreciation day, Rodriquez led the team down the hill, carrying a huge American flag with one hand. It occurred to me that I did not know if Rodriquez only carried the flag at the annual military appreciation day, or at every game. Rusty didn’t seem to be a fan, so I didn’t ask (after the game Rodriquez’ name came up, so I asked – only at the military game).

At the end of the national anthem five vintage airplanes flew overhead in formation. Ben’s boss flew with them to film the event but the cameras failed. Two Army skydivers parachuted into the stadium with the game ball. An Army chaplain gave a generic invocation. An impressive pregame.

With Stoudt under center, Clemson’s office was tepid, but managed to score four first-half touchdowns. They stuck with vanilla play calls: mostly runs, screens, and short passes. The defense effectively shut down Georgia State, whose offense posed no real threat the whole way. Rodriquez had a good game, reeling off a 24 yard punt return and darting away for a 21 yard reception. He graduates in December and moves to LA – the book about his journey from wounded soldier to walk-on Clemson Tiger is being made into a movie.

Just before halftime I noticed a group of flag twirlers huddled together in prayer down on the sidelines. I’m sure liberals detested the game-long display of faith and military might. I turned to Matthew and predicted that the Clemson band would repeat the halftime show they performed in Atlanta – and they did.

Near the end of the game I noticed many of the remaining Clemson fans making their way down toward the front row: they were preparing to rush the field when the clock struck zero. When the game ended Rusty and I watched the rush, and laughed seeing the girls sprinting toward the middle of the field. They wanted to snap photos with heartthrob Cole. 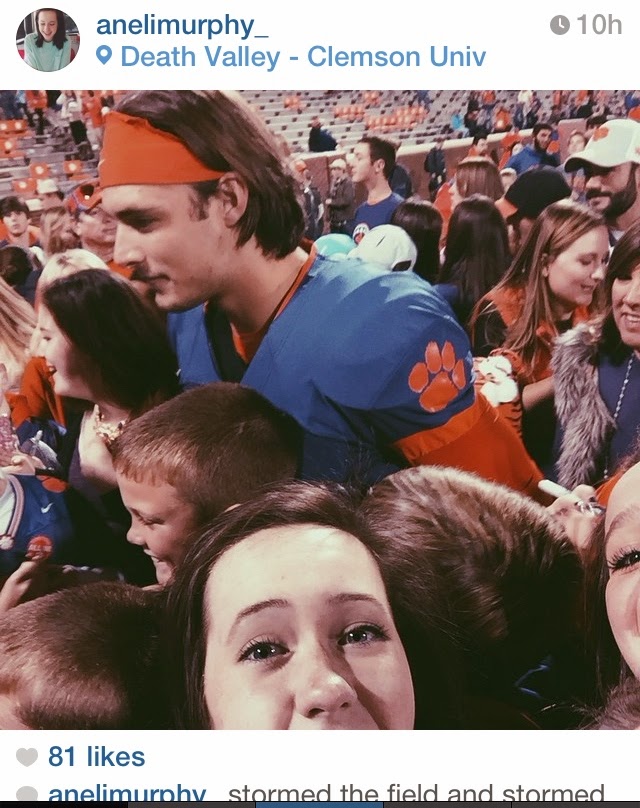 Eventually Rusty and I returned to the car. Soon the girls came running up, squealing about their pictures with an oblivious Cole in the background. Hilarious.  Then we walked back to the stadium – Ben had arranged a meeting of Cole and his sister Jordan. Saw the university president drive up in a custom EZGO golf car. 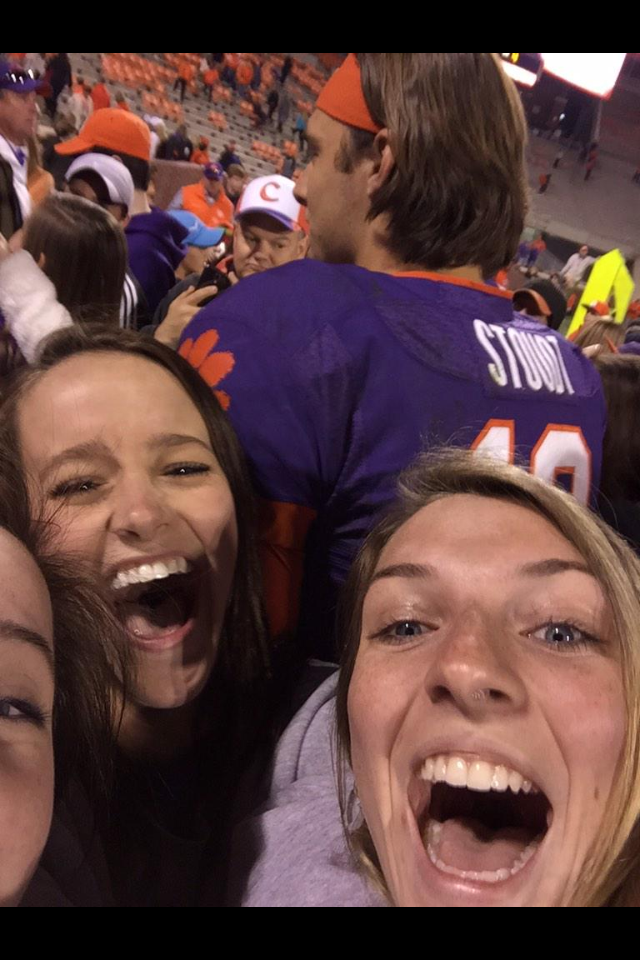 After the photos Ben finally came out and we met the rest of the group (15) at a Mexican restaurant (three tables). The place was packed but the service was great – they’re used to a post-game rush. Ceil and I split a plate. Very good. Got back in time to see Tennessee fail to upset Missouri. Ceil fell asleep. Anna and the girls gallivanted around town, making a late night run to Walmart.

Drove back to Atlanta in the rain. Will had returned from his Ohio trip in time to see the second half of Thomas’ state championship game (their rival beat them). Sunday night Will rode up with Joel to hang out at his school for a couple of days. I did laundry and rested. Ate leftovers. Ceil wanted to watch a movie, so we watched “The Mirror Has Two Faces” and Jay Leno’s Mark Twain Award show.

Some of the roads in Alpharetta have changed now that the Westside Parkway has been built, so I’ve actually taken a wrong turn or two over there as well. I haven’t checked out the Forum place on Old Milton Parkway yet, but I know there are some new restaurants opening over there. The Forum is kinda like that shopping center across from Perimeter Mall where the Target and lots of restaurants are. I haven’t been to the Forum yet, or whatever it’s called. Matthew is trying to get hired on at a Tex Mex place there.

Clemson is another place I get lost. All the roads look the same, but with the lake nearby all the roads all veer off into the country. Jefferson and nearby Pageland are so small that it’s hard to get lost.