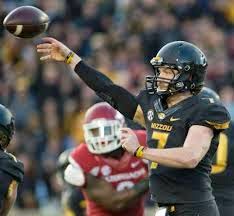 ARKANSAS/MISSOURI: The Razorbacks started strong but were the victims of two bad calls late in the first half. An Arkansas recovery of a Maty Mauk (above) fumble deep in Tiger territory was overturned, then a defensive lineman’s thoughtless love pat was called roughing the passer. These two calls completely changed the complexion - and outcome - of the game.
The third-string CBS announcers spent the entire game reminding viewers than an Arkansas win meant a Georgia berth in the SEC Championship game. This quickly got old.
Missouri’s kicker was in a slump and hadn’t made one from longer than 42 yards all year, but instead of making him rush the kick Arkansas called time out. With plenty of time to get set the kicker calmly drilled the 52 yarder. With nine seconds remaining in the half Arkansas once again called time – just when the Missouri kicker pulled the 50 yarder to the left. Given a second chance, the kicker nailed the kick. Missouri led 14-6 at the half, instead of possibly trailing by a 21-3 score.
That Missouri scoring drive that closed the first half completed the momentum shift. At the beginning of the second half the Tigers forced Arkansas to punt, and Missouri drove the field – only to have their field goal attempt blocked. 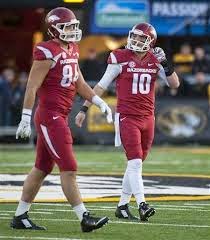 Arkansas’ poor record can be traced to a lack of discipline, resulting in costly penalties and turnovers. Also questionable coaching decisions. These continued against Missouri. The time outs, a fake punt that worked – though it happened when QB Brandon Allen had gone cold. After completing 6 of his first 7 Allen (above) was hit hard, then went 2 – 10 while sailing pass after pass.

Arkansas lost the lead and fell behind. It was clear to everyone except the head coach that Brandon could not lead a comeback. No wonder Arkansas is such a poor program. This coach is not the answer. Too bad UGA fans had to hope the woeful Arkansas team had to win a third straight SEC game. On fourth down the Razorbacks were called for delay of game and then offsides. Only a questionable personal foul penalty kept Arkansas hopes alive. QB Brandon Allen may have been courageous, but the only reason he should’ve finished the game was because Brandon was better hurt than his brother was healthy.

An Arkansas fumble was clearly recovered by the running back while the tackler was on top of him. As soon as the ball was secured the play was over, yet replay official John Bible erroneously allowed the Missouri defender to steal the dead ball. Game over – as well as UGA’s hopes.
Two plays later RB Hansburough was injured and carted off – along with Missouri’s SEC Championship hopes. Looks like another conference championship for the SEC West.
LIONS/BEARS: The Stafford to Calvin combo was in full gear, and the Bears did not look good.
EAGLES/COWBOYS: Dallas continues to struggle. I say Romo is the problem. Eagles QB Sanchez continued his return to prominence.
SEAHAWKS/49ERS: Like Dallas, the problem with the 49ers is the low-ranked quarterback.