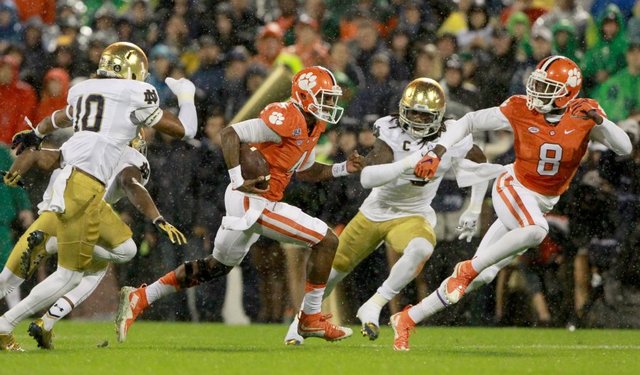 Seemed like more pregame talk about Notre Dame than Clemson. But I’m biased. Against Notre Dame. Tigers run down the hill and march all the way to the promised land. Deshaun would’ve scored on his long run if his escort had bothered to turn around and block either of the three Irish pursuers (above). 7-0.


Irish have to punt and Deshaun threatens again. Two big completions, the second for the touchdown. 14-0 early.


Georgia: take back the block punt and pick six and it’s a respectable 24-10 loss. But Dawg fans expect an undefeated national championship even without a decent QB. They badmouth even when the Dawgs have a great chance of winning the division for the first time in several years. Bama lost to Ole Miss, who is losing to a Florida team who beat Tennessee. Ohio State has struggled the last two weeks. Tech looks lost. Anyone could win out, including UGA.


Or Clemson. The defense is hitting hard, and force a 46 yard field goal. 14-3 at the end of the first quarter.


The SEC Network had its gameday show from the quad outside Will’s old Athens dorm. Will helped set up Friday afternoon, then acquired an all-access pass to the game. He spend part of the game on the sideline. More on that tomorrow.


The teams exchange punts. The irish want to trow ballcarriers on the ground. If they can’t they’re content to grab a leg and hold on. I like that style better than all the non-tacklers who focus instead on knocking out the ball. The downpour contributes to several dropped passes. Receivers are nonchalantly trying to make catches as they do when its dry.


Leonard Fournette has 183 yards and two touchdowns in the third quarter, including a long TD run. He is having a great year, but it’s doubtful he’ll eclipse Herschel’s college records. More on that later this week.


Notre Dame offensive lineman tackles the Clemson defensive lineman. The Tiger spreads his arms pleading to the ref, who finally throws a flag. Another punt. Clemson’s D is getting the job done. The ND QB’s throws are off the mark, but two Tiger bad penalties keep the defense on the field.


Notre Dame scores to cut the lead to 24-16. Clemson punts but then intercepts. Clock ticks under six minutes. Tigers miss a 45 yard field goal. Irish drive the length of the field but fumble inside the five yard line with two minutes left. Tigers run off a minute and punt to the 35 with 1:05. Fumble. Incompletion. First down. Clock play. 23 seconds. First down to the two with 12 seconds. Penalty on Clemson. A wide open Torey Hunter Jr makes the TD catch with 7 seconds to go.


ND goes for two to tie, but Clemson stuffs the run. Irish to kick from midfield due to the unsportsmanlike conduct penalty on Clemson, but the Tigers recover. Game.