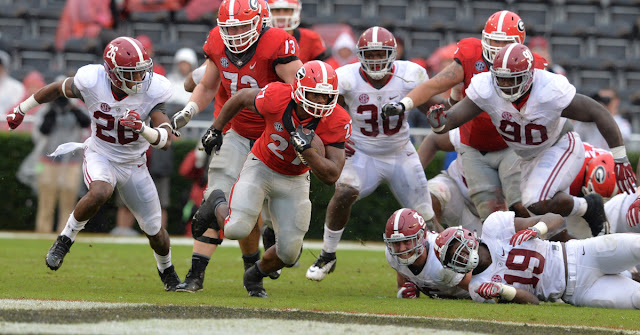 A big day of college football: SC@Missouri. Bama@UGA. UNC@GT. Ole Miss @Florida. Notre Dame@Clemson. In Athens Anna is in line before 11 am. When it comes to football I am a glass half full kind of guy. Players good enough to play major college football should be able to perform. As much as so many of them draw glory to themselves, they should be able to take the heat when they come up short.


South Carolina doesn’t look good, but thanks to poor Missouri punts, targeting, and a gift touchdown has stayed even with Mizzou. The Tigers are playing without legendary QB Maty Mauk. SC QB Nunez looks out of place in Spurrier’s system, which usually attracts blue-chippers. The Gamecocks also appear weak at both kicker and punter. Braves sideline reporter Tom Hart on the call in Columbia, doing a much better job than his sidekick Andre Ware.

With SC performing so poorly, this bodes poorly for UGA. The Cocks were the Dawgs’ only quality opponent so far this year. How Greyson Lambert performs against top notch competition will be determined today. SC@MO is the first ever SEC game to feature two true-freshman QB’s. Nunez throws three straight interceptions before leaving with an injured shoulder. Mizzou is no beast, but SC didn’t put up much of a fight.


GT takes the opening kickoff and needs ten plays to score. They look good in their throwbacks. 7-0.


Dawgs are stuffing the run but giving up a few big pass plays. Then Henry plows up the middle for six. 10-3.


Elijah Hood scores for UNC to cut the Tech lead to 21-7.


Justin has Lynch deep but the receiver slows down. Bama has the momentum and UGA is struggling on offense. They’re throwing too much and have to punt. Dawgs have the number of the injured Southern player on their helmet. Jackets fail to run clock, giving the Heels a chance to score before halftime. No GT pass rush, and Williams finally finds a wide open receiver. 21-14 Jackets.


No UGA offense. Why has the running game been abandoned? Lambert runs for his life and throws into the Bama line – just like he did in the first game of the season. Punt. Bama bomb. 24-3.


Chubb gets three carries, and then UGA returns to the air. Punt. Lambert has missed on 8 of his last 9 passes. After a Bama punt McKenzie pulls a hamstring. Bryce Ramsey in at QB as the half ends. On the couch Ceil and her mom are asleep.


Zero GT pass rush. Williams isn’t impressive, missing on some and lucky on others. Tech is scared to tackle him. A pick six is dropped. Marquise scrambles to the one and NC scores. 28-24.


Another bad decision: Dawgs run out the kickoff from four yards deep in the end zone and get tackled on the 15. Chubb twice for eight, then loses yards on a slow developing play. Punt. Late hit. Another bad decision. Saban wants blood. Wide open receiver. Another late hit, knocking henry into Uga’s doghouse. Bama QB keeper for the touch. 38-3.


In Atlanta Thomas bobbles the snap on 4th & goal and is denied. Momentum continues to swing North Carolina’s way. This was Tech’s game to lose, and they just might. In Athens the rain thickens. Two Chubb runs followed by a Bama blitz and sack. Another Barber punt. The whole game is being played in Georgia territory. Dawgs can’t tackle. Or catch passes. Interception.


Expecting Ramsey to come in and save the game after hardly playing all year is unreasonable. Vern and Gary may have it right: compared to the rest of the SEC schedule this Bama game is less critical. Dawg fans are disappointed, but up to this point Georgia hasn’t played anyone. To expect them to run the table without a decent QB The rain thickens more. Tide fumble. Lambert returns, but fumbles a snap. Bama punts, and Chubb breaks free for an 83 yard touchdown. 38-10.


Tech loses the lead, then sends everyone on 4th & five – allowing Williams to run for a touchdown. A complete defensive failure. 38-10 with 4:52 left. The failure to score on 4th & goal is looming large for Tech. Butker connects from 37 to make it a one score game with only 2:50 remaining. Too little too late? 38-31.

Ramsey can't hold onto the ball. Neither can Chubb. Tech's onsides kick fails. Marquise runs for a first down. Playing like this Tech will struggle against Clemson, UVA, Pitt, Virginia Tech, and UGA. Their much beloved bowl streak could end. A losing record is foreseeable. Game over.

In Athens it's only a matter of time. The Bama RB disliked being tossed down by the UGA defender, but that's exactly what a Bama defender did earlier in the game. Unlike the complaining Dawg fans Danielson keeps looking on the bright side. But next week in Knoxville the Vols will be anxious to avenge their disappointing loss to Florida.

Keith Marshall carries. A lambert interception, and nobody seems interested in tackling the ballcarrier. Mercifully, the clock hits zero.