Out of Sight, Out of Mind

Last week Ceil and I had driven somewhere in our CRV and the low tire pressure indicator came on, so I stopped at QT for air. It was cold and I was bundled up. I checked the air on the side nearest the air stand, then stretched the hose around the front of the car over to the other side. I noticed a guy in his car in front of us. Ceil was checking her phone, but you'd think she'd see me in her peripheral vision. As I was pulling the hose backing up I tripped over the curb.

As I began to fall I realized there was no way I could catch myself, so I resigned myself to hitting the pavement. I didn't stretch out my arms to break my fall because I was holding onto the hose. I hit the ground with a thud. Luckily my head didn't snap back and hit the pavement. I pulled myself up and looked inside our car, but Ceil hadn't seen me disappear from view. I began to laugh. Since then my neck has been a little sore, but not too bad. 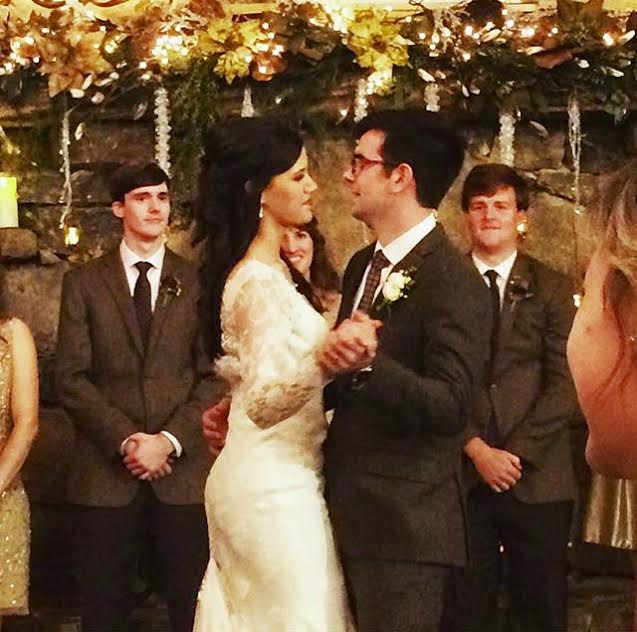 Mary-Clayton and Will have their first dance as a married couple. More reception photos to come.
Tuesday: down two pounds after the first day of my diet, but I know I've gotta hang in for the long haul. Lunch meeting was catered by Willys but I only had chicken and salsa on lettuce. Had some chicken later that afternoon, and baked sweet potato strips and air-popped popcorn at home. Also some cereal. Drank lots more than usual. Didn't meet my steps goal but I did climb ten flights of stairs. Brought Matthew a Moe's burrito and he gobbled it down.
It was pretty good the Whitakers got to sit in the family section. Someone mentioned that the room they sat in during the reception was where all the older people were seated (including family). All the younger adults were sitting in the other room. Not sure what the deal was - maybe they thought when the music started playing it would be easier to talk where the older people were. By the end of the evening my voice was hoarse.
Worked until 6:30 and made some stops on the way home. Had to pick up M in Alpharetta at nine. Picked him up some Taco Bell and ate two bites myself. One Jimmy Johns sandwich for lunch. No chips or cookie. PM ate some cereal and taco meat, no fixings. With the cold and busyness at work, my exercise program is getting off to a slow start.
I’m starting to dig through all the mail, receipts, and other paperwork that piled up between December 30 and January 10. Just reviewed Reid’s Destin Dining Detail as well as the NOLA tourney he handed me at the wedding. I was hanging up my sportcoat on Sunday and felt the paper in my pocket, and pulled it out. Sometimes I like to keep papers like that (or church bulletins or funeral notices) in the pocket where it was, so the next time I wear my jacket I can have a memory of the last time I wore that garment.
Wednesday: one team member is in the hospital and another off today, and I’m still trying to catch up from being off last week. Hard to write wedding recaps without knowing many names, and I can’t find one of the bulletins.
Rough day at work Thursday. People are quick to talk and slow to listen – even when they don’t know many of the details of the situation.
Left work at 4:10 to fight traffic 60 miles to Cassville GA. So stressed from work that I couldn’t pay attention to my book on CD. Made it to the 75/285 Cobb Cloverleaf in 30 minutes, then fought traffic north on I-75. Made it to my exit at 5:35 and gassed up the Civic before arriving at the Gilberts 15 minutes before C and M. Had a nice time of recounting the wedding. Will and Regina made grilled cheese sandwiches to go with hearty ham soup. After dinner W&MC opened wedding presents, then we viewed about 400 photos from the wedding weekend. Dr. Tom made it home from his rounds as we were finishing up. Left at 11:20 and made it the 43 miles home shortly after midnight.
In Destin they: grilled out steaks. Monday they got a massage. Last night they ate at Dewey Destins and loved it. They shared grouper, shrimp on grits, and praline cheesecake. Also scallops. They worked a puzzle and took chilly walks on the beach. Tuesday they drove to Seaside, biked 12 miles, drank coffee, and ate tacos and ice cream. On the way back they picked up a Mellow Mushroom pizza. They enjoyed the roses in the condo.
Read that recently Tim Duncan was held scoreless for the first time in his career – 1359 straight games scoring at least one point, a record to start a career. Duncan shot 0-3 from the field in 14 minutes of play. Also a good article on Joey Crawford. I did not know he was the son of MLB umpire Shag Crawford. By the way Marvin Hudson said he tries to focus even harder during blowouts, because that’s when people have the tendency to ease up.
Based on John Wooden’s coaching records, UCLA went undefeated in 63-64, 66-67, 71-72, and 72-73. Between 1966 and 1973 UCLA’s record was 205 wins and 5 losses. As I recall either Lew Alcindor or Bill Walton spent their entire college career at UCLA and only lost one game.
Scott and Robin Condra were at the national championship game. Stuart Condra told everyone that Scott has attended winning national championship games at the four major bowl game sites: Rose, Orange, Sugar, and Fiesta. Scott must have a connection there at Coke.

Stuart wrote an essay about the game with 16 takeaways about the game. I didn’t know he was a writer. His comment about most college football fans never seeing their team win at least one championship is only true because “most” means more than 50%. If 35 teams win in 50 years, that means 65 teams don’t win. So many teams have won in my lifetime: GA, GT, Auburn, Florida, FSU, Bama, Miami, Texas, Southern Cal, Notre Dame, Ohio State, LSU, Clemson, off the top of my head. Plus all the winners in the smaller divisions, like Georgia Southern.