Due to the busy day and rush hour traffic and the shuttle bus, I was an hour late to the Friday rehearsal. The sun had set and Indigo Falls was lit for the occasion, giving it a magical wintery feel as the shuttle took me to the chapel. I had missed a special time, so I tried to enjoy and soak up all the remaining moments. Plus I had to figure out what was going on, to rehearse. I had no idea about what the service would be like. The music sounded great and the roving minstrels added energy to the occasion. Watching the bridesmaids and groomsmen process made me finally realize what we had all so long awaited was finally upon us.
Eventually we all took the shuttle back up the hill to the rehearsal dinner. All the guests had arrived: the wedding party, those helping with the wedding, given showers, and family and guests who'd traveled in from out of town (Alabama, Canada, Colorado, Florida, Indiana, Louisiana, North Carolina, South Carolina, Tennessee, Texas, Virginia, and of course Oklahoma, to name a few). There were 96 guests, and there wasn't room for several who had helped out so much with the wedding. At the last minute tables were assigned, not knowing exactly where in the room the tables would be. Mine turned out to be in the corner.
When the food was ready and everyone seated, I welcomed everyone, blessed the food and weekend, and gave directions for the buffet. While I had long known I would have this responsibility, for weeks and even months I had writer's block. I just didn't know what to say. Some would say this was fortunate. Throughout the busy day I tried to focus and prayed for words to say. God granted me a few thoughts and themes and lines, but that was about it. I was thankful for Mary-Clayton and Will, for all the friends and family surrounding us, and for the fun time and special moments we were about to share. That's what I wanted to express. Now later I'm not exactly sure what I actually did say.
The food was delicious: brisket, spicy cornbread muffins and other breads, salad, cole slaw, baked potatoes, and all kinds of fixins. Later the efficient and friendly staff brought out ice cream and two kinds of cobblers: peach and blueberry. I was so busy talking that I never was able to get a dish. There were so many people there I wanted and needed to speak to, not just because I was the official host of the evening but also because I hadn't seen some in months or years. I wasn't able to speak to everyone, which was unfortunate. Hopefully no one thought I was ignoring them, as that certainly wasn't the case. I spent more time away from my assigned seat next to Ceil than in it.
After the meal MC's brother Thomas introduced a slideshow of Will and MC's life. Before Christmas we had sent over dozens of photos of Will from the ones we had at the house, taking care to include as many family members as possible. Thomas picked out the ones he wanted and organized them chronologically to display. He had a time getting it going, and with so much going on I knew my fleeting idea of an after-dinner talent show would've been logistically prohibitive and taken much away from the specialness of the evening.
Then maid of honor Anna Gilbert and best man Joel Norman stood to offer the first toasts/tributes/stories. Most came from their friends with a few grown-ups mixed in. Joel shared a personal yet hilarious story about when they were eight years old. Katie and a couple other bridesmaids and minstrels spoke – some on the couple's obvious love and dedication despite the 900 miles of separation, and how their leadership and commitment to purity stood out. Groomsman Chandler gave Will a bit of advice gleaned from his eleven long months of marriage.

MC's parents shared about the couple's courtship from their perspective, and had Will roll out the new welcome home banner with his name printed instead of written in. Talking about our friendship, Dr. Tom inadvertently and hilariously spoke the line of the night: "I slept with Mr. Murphy at the zoo." Later we'd have to explain what he meant.

Will ended the evening sharing before closing in prayer. One of the staff servers had stopped cleaning off the tables to listen, and was almost moved to tears by what he said.

It was a very special and memorable evening. If anyone made any pictures or videos it sure would be nice if they'd share them with me.
After dinner the groomsmen returned to sleep at the Gilberts' house in Cartersville. The bridesmaids were staying on site at Indigo Falls. I drove my parents back to the Embassy Suites in Kennesaw, the official hotel of the wedding. I had taken all my wedding clothes to the hotel but forgot the sport coat I meant to wear to the rehearsal. Since the Friday tie didn't match my Saturday jacket I wound up wearing my wedding outfit to the Friday rehearsal. Ceil thought it looked good and made me wear the same thing to the wedding.
I had to run home to pick up several forgotten items, so I slept there to be able to let out Barney that night and in the morning. While I thoroughly enjoyed every bit of the incredibly long day, I was so tired that I slept like a baby.
Over the evening Ceil's mother had grown weaker and sicker. In the morning Ceil had to leave for Indigo Falls without her, while Teresa, Corrine, and Lennie took care of her. The white dress shirt and black slacks I was to wear to the wedding were in Joan's hotel room, so I just wore others from home. 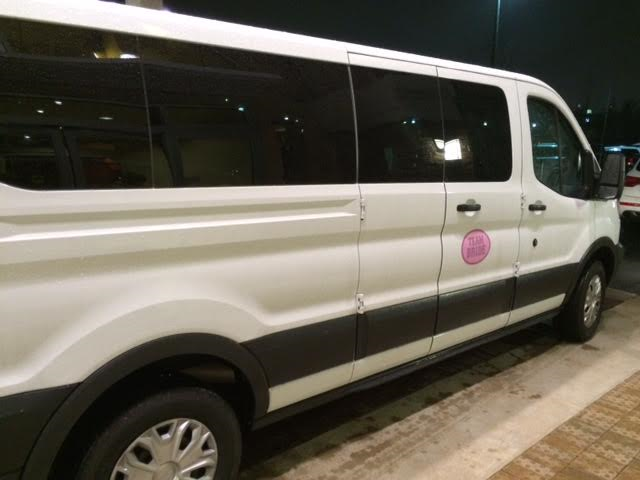 At the hotel lobby I collected my thoughts and spoke with wedding-goers as they came and went - including Dr. Tom, still driving the van with the "Team Bride" sticker. Shortly after one I left with my parents for Indigo Falls. It was time to have us a wedding!

Email ThisBlogThis!Share to TwitterShare to FacebookShare to Pinterest
Labels: Will

Wonderful post! I am an event planner so I love to read this kind of stuff. Well, lately I am busy in making a list of the best Los Angeles wedding venues for my client. If you have recommendations for any good food spots in Los Angeles then please share them here.