The Roof May Never Work 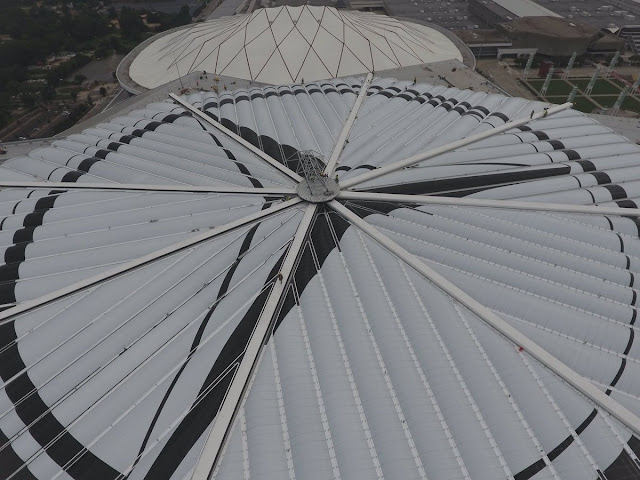 Guy I know works for the company that helped build SunTrust Park and Mercedes Benz Stadium. They’re going to build the Braves new spring training facility as well.
He says the “retractable” roof on Mercedes Benz Stadium may never work. Last week the Falcons had announced it would remain closed for the first month of the season. My friend had known this since last April, when they took all the big cranes out of the inside of the stadium (below) so the field could be put in, so the games could be played. Work to remove the field and seats from the Georgia Dome had to be stopped, in case the new stadium wasn’t going to be ready. 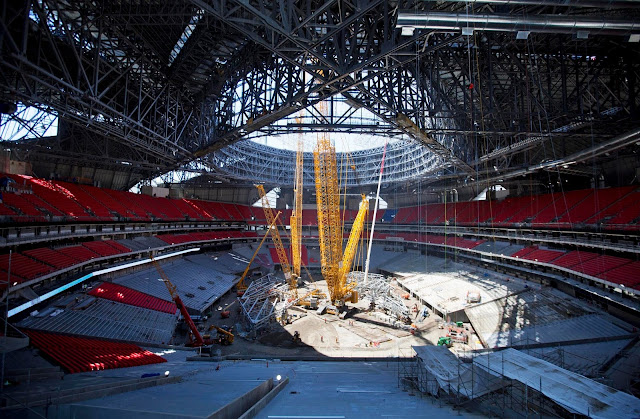 He said there were serious doubts in the construction community whether the roof will ever work. It will take tens of millions of dollars. After the Falcons season, and after the college championship game in January they’d have to move those big cranes back inside to work on the roof again. With the Mercedes name on the building, and the Super Bowl coming to town in February 2019, there are lots of people in high places who want to see that roof working. But it ain’t happening this year.

Aaron Judge will be ok. Everyone has their ups and downs during the dog days of the season. Plenty of time left. Few players could keep up with the pace he was on.
Everyone is asking (again) what’s wrong with the Braves. We knew going into the season the best they would do would be to win half their games. When they went on a hot streak I knew it would only be a matter of time before they’d cool off again.
I wonder if the Garcia trade took some of the wind out of the Braves sails. It was common knowledge that he was tops on their list to trade, but still it had to be a downer in the clubhouse. Carmargo is hitting great, but even though Dansby had a low average and struggled in the field (and the demotion to Gwinnett will be a good thing in the long run), Swanson was still doing lots of little things to push runs across the plate.
I missed that part of the game. Another reason the bunt is so bad is that no one can bunt any more. This weekend I saw one Brave (the guy they got from the Twins?) try a bunt, and he fouled it off. It was obvious he had no clue how to bunt, slapping his bat out there at the last minute instead of squaring around to make sure he could make contact.
Maddux and Glavine knew how to bunt. They have more sac bunts than any other right-handed and left-handed pitchers in history. But if you look at the all-time list of sacrifice bunts, there was a whole lot more bunting going on before 1950 than today. These days there are fewer bunts cause everyone is trying to hit home runs. They’d rather give up double play and try for the home run. Young fans aren’t watching baseball because there’s less action – only walks, strikeouts, and home runs.
So the Twins traded Garcia to the Yankees. Snitker said Johnson is no longer the primary closer. Had he pitcher better the past few weeks he probably would’ve been traded as well.
Busy weekend. Worked until 5:45 on Friday. W&MC beat me home. I arrived and the house was full of flowers. C and MC spent the evening arranging them. They were to be used on Saturday for MC’s sister Anna, who was being propsed to. W was studying. I went out to pick up supper: C had ordered Thai food. Not my favorite, though some was edible. Later MC’s parents dropped by to pick up all the flowers in his F150 pickup.
Saturday morning W&MC headed out to Tennessee for the big event. They had breakfast at some great biscuit spot they’d found, then headed up to the mountains with MC’s sister Anna. MC’s parents had gone in earlier, and had to lug the flowers almost a mile up the trail. Tom said he was sweating and huffing and puffing. At one point he fell – but didn’t drop the flowers. Zach arrived with the photographer, and helped carry the rest of the flowers. Then Tom and Regina moved the truck and signalled Will that it was ok for W&MC and Anna to go on their hike. When they neared the scenic overlook W&MC dropped back, and Zack came out of the bushes to propose to Anna. Since MC had worked so hard on the flowers, she and Will lugged them back to the car. Zack’s parents had flown in for the affair, and afterwards they all gathered in Cartersville for supper.
Ceil and I worked around the house Saturday morning. The place was in decent shape. I did a bunch of laundry, but constantly going outside into the heat and back inside to the cold air conditioning made me sick. By the afternoon I was sneezing uncontrollably, and couldn’t do much at all. Ceil had gone over to help out at a Refuge Coffee rummage sale, so I chilled pretty much the rest of the day. I had to dog-sit Barney and Okie, but they tired themselves out so much on Friday night that on Saturday they just sat around. While Ceil was at the YMCA I had let Okie outside, and he wound up running around the neighborhood (with me giving chase). W&MC came by about 7:30 on their way back to Augusta. On her way home C shopped at Dekalb Farmers Market.
I was still sick on Sunday morning, and pretty much stayed in bed until eleven. M started cleaning out his room, and I cleaned and straightened our bedroom. C cooked me an eggy-boy sandwich (without much food in the house , on Saturday I’d eaten eggs for breakfast and lunch). M had decided to move to the downstairs bedroom, and a couple of friends came over to help out. Anna arrived home from camp, and I helped her unload her car. With her stuff and Matthew’s mess and the leftover flowers, the house and garage were a total mess. Not sure when we’ll get it all cleaned up. I took Anna’s filthy Jeep to the carwash and got the emmissions tested. C cooked homemade pizza, and the four of us plus M’s two friends are a late lunch.
Then Anna, Ceil, and I went to an engagement party for MC’s sister in Roswell. Lot’s of MC’s family was there, who I knew well.  After the party we didn’t do much. I had leftover pizza for supper, and we all watched a movie on DVD.
Busy week coming up. Today is month end, which is always a busy day. Two coworkers are out. Big lunch meeting – BBQ. Tomorrow I’m taking off to move Anna to Athens. Will probably get my car tags as well.