Nicklaus on The Miracle 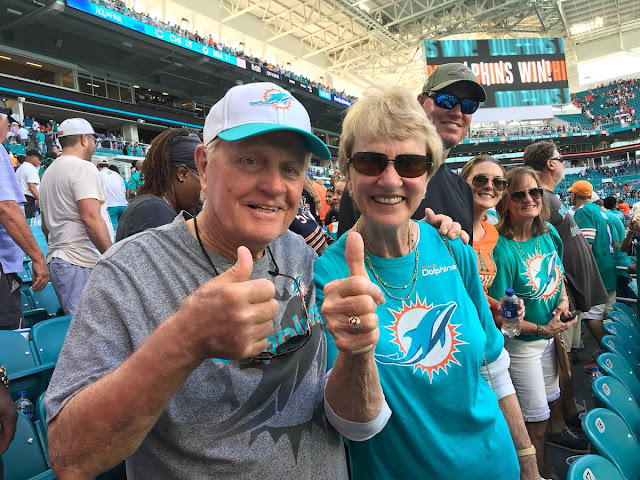 When I heard about the Dolphins' miracle touchdown to beat the Patriots, the first tidbit I saw was a tweet from Jack Nicklaus, who was at the game.
I've witnessed in person a lot of great sports moments in my life, but as far as football goes, I can't say I have EVER seen anything quite like that! Fantastic Fin-ish! Wow. WOW! Go Fins!  #MiracleInMiami #BlessedToBeThere
Why was Nicklaus at the game? To see the Patriots? No, his grandson Nick O'Leary plays tight end for the Dolphins. O'Leary was an All-American at FSU and was drafted by the Bills. His father Bill played tight end at UGA, and his mom Nan Nicklaus O'Leary played volleyball at UGA. 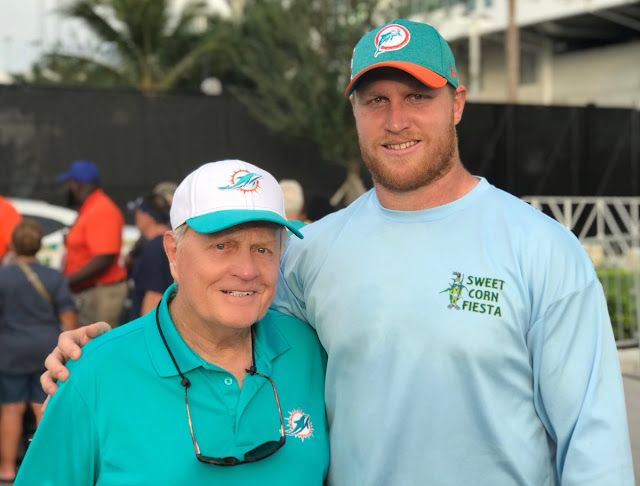 As a Texas schoolboy Saints QB Drew Brees defeated fellow Austin native Andy Roddick in junior tennis.
Our Sunday School Christmas party is this coming Saturday night. Last year we had it at John's house. This year John has had health problems all year. This year Larry agreed to have it at his house. Then last Friday night Larry's car was stolen. The car has yet to be found but his satchel was recovered, which contained his beloved Bible. The thieves are in custody. Seems like hosting our SS party is similar to the Madden curse, where whatever star player they put on the cover of the Madden video game suffered a season ending injury.
I knew nothing of new GT head coach Geoff Collins, formerly of the Temple Owls. Late yesterday Coach George O'Leary's daughter said he was a leading candidate, and she approved of him. Coached at GT and went to high school locally. He also coached at UCF with her dad. She said this after getting on to me for wearing an orange Clemson pullover. I never see her, and I might wear that pullover once a year.
Cold weekend. Tried to stay warm. Friday night Ceil needed to go to Perimeter Mall so I drove her and M tagged along. I dropped them off and stayed in the car to delete emails. Nodded off a couple of times. Before we went Ceil had cooked Mexican so I made a couple of beef quesadillas.
Listened to a 680AM podcast about picking bowl games. College Football expert Chuck Oliver and a Las Vegas bookie. They both agreed bowls are harder to pick than regular season games. Some teams are motivated, others aren't. Lots of reasons. Then the bookie said the 6-6 Colts would beat the red hot 9-3 Texans. They did.
Saturday morning small group. C went to the YMCA and Pikes nursery. Housework. Watched Hallmark Channel, the MASH marathon, and the Heisman Trophy. Now they're digging up things Kyler Murray tweeted when he was 14. Baked chicken for supper. M went to the late movie.
Sunday School. More quesadillas. Worked on my car search pretty hard. Saw a little of the Falcons game. Just after halftime the Falcons defense committed their 7th penalty, resulting in six Green Bay first downs. One guy dropped two interceptions. Ceil went back to Perimeter Mall. I lined up some test drives. Watched Hallmark Channel while working on laptop.
Monday: worked until six. Seems like it rains every day. Ceil cooked chicken in rice, plus tossed salad. M had run some errands and came home with a burrito bowl from Whole Foods. We watched The Neighborhood and The Voice, then a Christmas Special hosted by the acapella singing group Penatonix.
Christmas cards: Saturday night I tried to order some but couldn't get the order in until Sunday night. Hopefully they'll come in time. Hopefully they'll look better than last years. Also need to write my famous Christmas letter. I was just thinking how my family's 2018 was almost exactly like our 2017. Not much news. But I'll write one anyway.
I used to listen to The Bert Show all the time, before sports talk came along and books on CD. So I've known about Bert's Big Adventure, where that morning crew takes several families to Disney. This morning I listened to The Bert Show but they didn't have anything about the Big Adventure when I was listening. DJ Bert attends Buckhead Church and has had Andy Stanley on the show in the past.