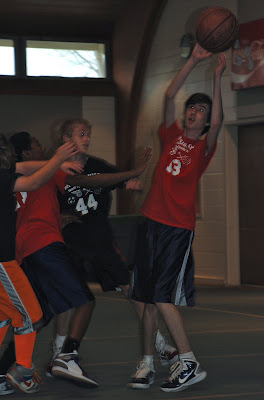 ’s Reds won 33-19 Saturday, scoring the first ten points and the last twelve points of the game. The Reds switched from zone defense to man-to-man, and was assigned the Black team’s best player. Perhaps the best player in the league, did a great job of shuttling him down, contributing to the victory in a large way.

After scoring early in the second quarter to take a ten-nothing lead, the Black team outscored the Reds 19-11 over the next two quarters. With just a two point lead, the Reds ran off the last twelve points of the game.

Leading scorer and primary ballhandler Ryan missed the game, and there were questions as to who would take up his slack. In recent games Ryan had been turning the ball over more than he’d been scoring, and Darryl’s frantic pace of play had also been leading to numerous turnovers. Saturday Darryl got in early foul trouble, so Coach P sat him out, saving him for the end of the game.

Big Chris led the way with 16 points and 18 rebounds, going 7-20 from the field. Most of his shots were putback layups of rebounds right under the basket. Had he made half the shots he missed, Chris would’ve had 38 points (but only seven rebounds). Chris played 35 minutes of the 40 minute game. , Tristan, and Sam played 30 minutes, and Ethan, Darryl, and Fletcher played 25 minutes.

At Sunday’s awards banquet Ernie Johnson Jr. used Jeremy Lin as an example of persistence for the youngsters emulate, how we should always be ready when we are called on. He said that the player’s “Trust God.” trophies mirrored the mindset he has lived ever since he suffered from cancer, to trust God no matter what. Unlike many celebrity speakers, Ernie went out of his way to mix with the kids and parents, posing for pictures and sticking his head in the kitchen to thank the food servers. Without being asked, Ernie handed out trophies to the kids. He said the Michael Jordan was the greatest ever, “better than .” While telling a story from his Little League youth, the father of six voiced his displeasure with select travel teams. He regretted missing some of his kid’s activities, due to work. Afterward he said Lang was “a real good guy”.