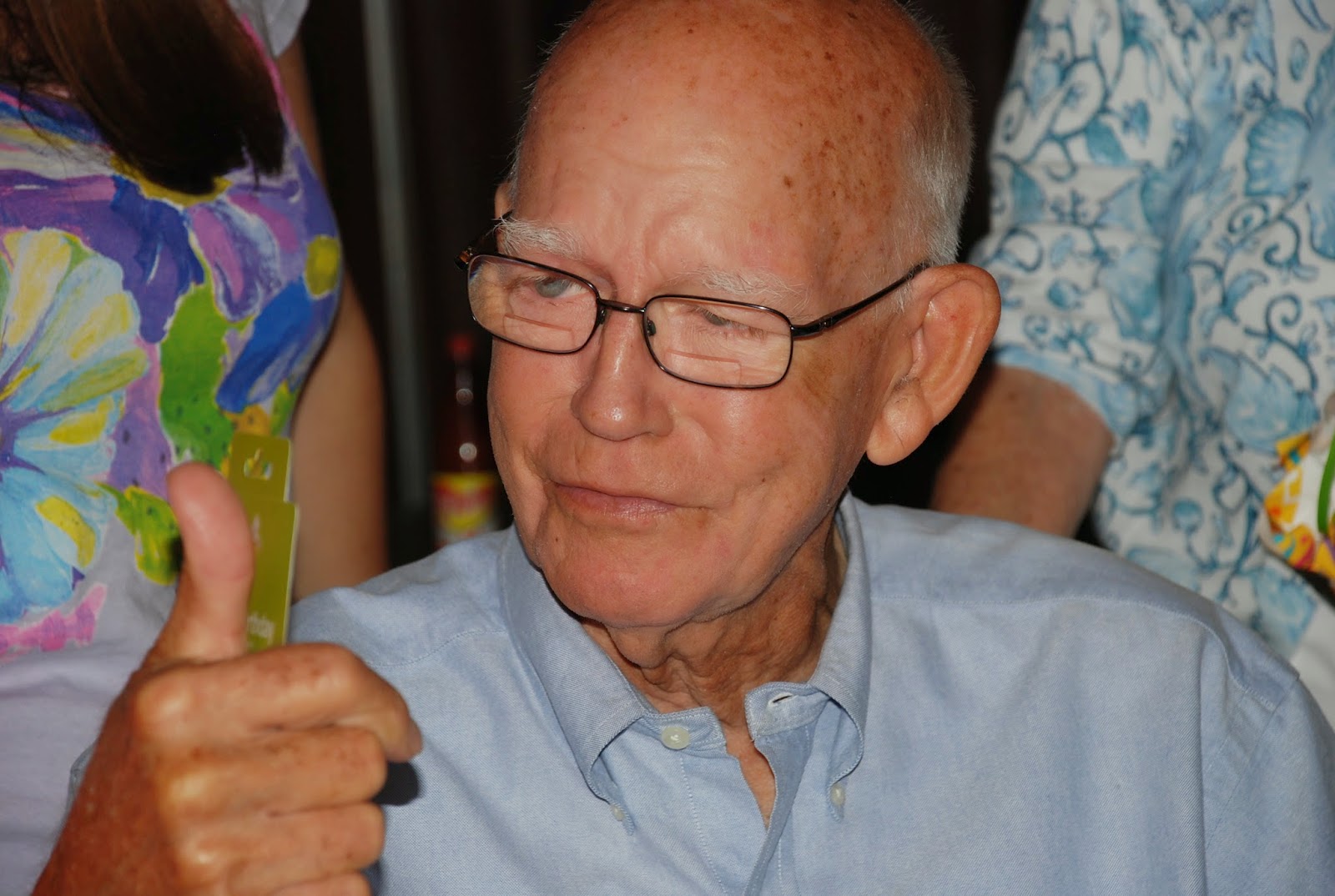 What follows is the text delivered by Will on August 13, 2014 at the memorial service for his grandfather, Edwin Ernest Miller Jr., at Jefferson United Methodist Church:

“Everyone must leave something behind when he dies. A child or a book or a painting or a house or a wall or a pair of shoes made. Or a garden planted. Something your hand touched some way so your soul has somewhere to go when you die, and when you look at that tree or that flower you planted, you’re there. It doesn’t matter what you do, he said, so long as you change something from the way it was before you touched it into something that’s like you after you take your hands away. The difference between the man who just cuts lawns and a real gardener is in the touching, he said. The lawn cutter might just as well not have been there at all; the gardener will be there a lifetime.”

This is a quote from the book Fahrenheit 451. The main character, Granger, is struggling against a cookie cutter society that is limiting creativity and imagination by forcing all books to be burned. As he is faced with this issue he remembers what his grandfather used to say, creating this distinction between a gardener and a lawn-cutter. The lawn-cutter’s purpose is merely to maintain. Granger even goes as far as to say that they may as well just not have been there at all. But the gardener works and leaves his touch forever.

This is a perfect picture of who Granddaddy was. Granddaddy was a gardener. While he literally liked to garden, he left his mark on so many areas of his life in the way that gardeners do. Whether you were his grandkid, a friend, or complete stranger, Granddaddy touched your life.

I shared a bond with Granddaddy that is unique among the grandkids, in that we both like to wake up early. When we were together we would wake up and share a cup of coffee and on a special occasion he would take me out to eat. The funny thing is that he has never met a stranger and without fail he would make a friend on our outings. It wasn’t hard for him because that was the nature of his heart. He made you feel loved regardless of who you are. He just had that touch.

As a friend, Granddaddy would make you feel loved by showing that he genuinely cared about you. This is the way that he would touch your life. This week I have been absolutely blown away by all of the love and support that the family has received. It has all been a result of what Granddaddy meant to so many people. After following him around through town over the years and talking with people these past couple of days, I’ve concluded that Granddaddy must have known everyone within a 30 mile radius by name. He just loved people.

As a grandkid, Granddaddy has been someone I have looked up to all of my life. Growing up being from Atlanta, literally every morning we could expect a phone call. We would pass the phone around just to talk to Granddaddy and tell him about our plans for the day and how we were doing. When I went to college and as technology advanced, I could expect a text message from him every day. They would be about this long because he texts one letter at a time. You know it took him forever to send. But he loved to do it because he loved me and cared about my life.

He would keep track of what I was doing each day and when my classes were. He knew when every test was and what I was doing each weekend. He would fill me in on what was going on around Jefferson and what doctor appointments he had that week. Every month when he got his Social Security check, the first thing he would do was sent twenty dollars to me and Ben. Every month he would say word for word “I wish I could send more but I hope it helps.” It was such simple things he did that made a world of difference in my life.

He cared so much for others and not himself. My last memories of him were from the beach four weeks ago. Granddaddy cooked breakfast for the entire family even though he could barely stand. He put others before himself because that is just the type of person he was. And these last couple of years his health declined his hope was fixed on the rock that is Christ.

I Corinthians 15:50-57 says: “I tell you this, brothers: flesh and blood cannot inherit the kingdom of God, nor does the perishable inherit the imperishable. Behold! I tell you a mystery. We shall not all sleep, but we all should be changed, in a moment, in a twinkling of an eye, at the last trumpet. For the trumpet will sound, and the dead in Christ will raised imperishable, and we shall be changed. For this perishable body must put on the imperishable, and this mortal body must put on immortality. When the perishable puts on the imperishable, and the mortal puts on immortality, then shall come to pass the saying that is written: ‘Death is swallowed up in victory.’ ‘ Oh death, where is your victory? Oh death, where is your sting?’ The sting of death is sin, and the power of sin is the law. But thanks be to God, who gives us the victory through our Lord Jesus Christ.”

Granddaddy was a very good man but his goodness is not the reason that he is praising God in heaven as we speak. Granddaddy, because of sin, could not inherit the Kingdom of God. Romans 3:23 says “For all have sinned and fall short of the glory of God.” Romans 5:8  says “But God shows his love for us in that while we still sinners, Christ died for us.” It is because God saved him and his sins were paid for through the blood of Christ that changed him. It is because of that we can rejoice in his life and death because we know he is home.

The quote from Fahrenheit 451 describes a man whose touch lasts forever. My life has been forever changed thanks to my Granddaddy. And like the gardener, while he is gone in the body, his touch will be around forever.

NOTE: The video of Will's eulogy can be seen here

Email ThisBlogThis!Share to TwitterShare to FacebookShare to Pinterest
Labels: photos, Will