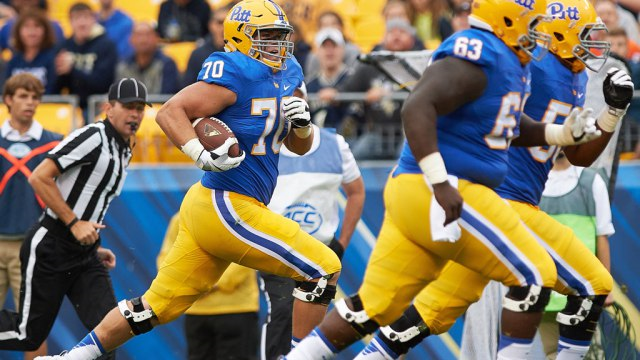 Tech made it a close game, but Pitt is good this year, with several fine offensive weapons (including, evidently, an offensive lineman scoring on a wonderfully imaginative play). Great Pitt uniforms. Tech should've worn gold helmets.

The Jacket offense continues to improve, but I'm not sure they could've won in overtime. Johnson might be saying the offense should be able to get a yard on a fourth down with the game in the balance, but Johnson should get most of the blame for going for it so deep in Panther territory knowing Pitt's kicker is deadly accurate. Will this be a nail in Johnson's coffin? Next Saturday's game against a hungry Georgia Southern team could be another. 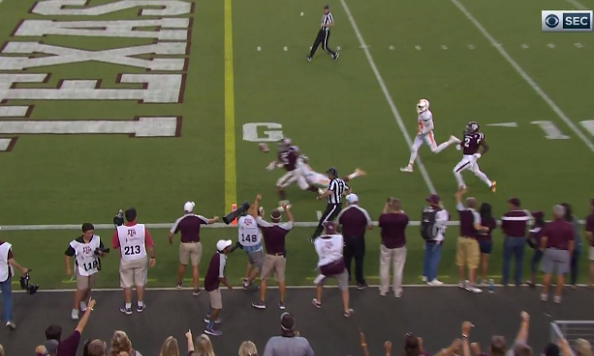 Tennessee almost got lucky again, but a late interception in overtime sealed the deal for A&M. Could Kentucky or Missouri upset the Vols? That is Georgia's only hope. Tennessee does have the talent. A&M had two chances to win in regulation (including the well-timed one yard line punch out above), but sealed the deal in OT despite questionable kicking. 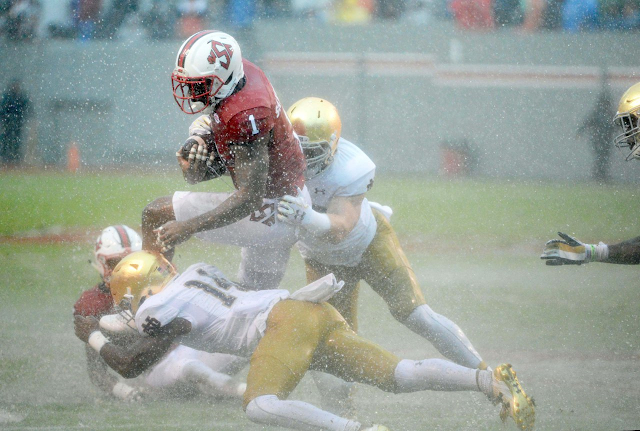 Notre Dame managed one field goal in the Raleigh monsoon. Chip Kelly blamed the poor center, but the game had long been lost before that. Guess another assistant coach's job is in jeopardy. Though the Carter Finley stands were barely half full, this week there will be 200,000 fans saying they attended the upset.
Houston fell from the ranks of the undefeated, losing to Navy.
After edging FSU, the Heels let Virginia Tech beat them. 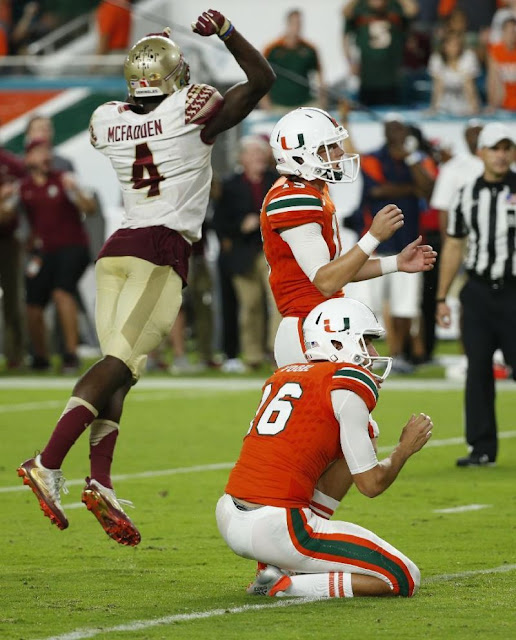 FSU edged rival Miami, thanks to a blocked extra point. Cudos to Mark Richt for dusting off the Canes' classic unis - even the striped tube socks.
Oklahoma won the Red River Rivalry game. Unfortunate that influential Texas boosters are pressuring head coach Charlie Strong. If he can't win there, no one can. Coaching candidates will stay away from such a toxic situation, so it could be years before the Longhorns can become competitive again.
GA/SC: Brent and Jesse kept calling it Sunday night, despite the bright cloudless afternoon sky. Hopefully young Eason's many off-target aerials were the result of a bad game, but the overthrows are becoming repetitive. While the freshman stands in the pocket and isn't afraid of being hit, I'm wondering if his sensitivity to pressure is making his throws sail high. Some experts on Twitter called for Lambert, but I'm glad Kirby has stuck with Eason. Lambert may excel against inferior competition, but he's proven he disappears in big games.
The Dawgs ran the ball at will, but needed to mix in some passes to keeps the Cocks from packing the box. Then Georgia threw too much, in an effort to get Eason untracked. After South Carolina gave away three turnovers in the first half, it was inevitable that a second half comeback could be staged. Another Dawg interception led to a score, and poor planning on the Gamecock onside kick (six SC players were on the other side of the field, with only four trying to recover the ball) allowed the fleet Godwin an open field to score.
After wearing black over black and black over white the past two weeks, South Carolina went garnet over garnet without success. There's always next week's different uni to try.
Again there were a couple of occasions of poor clock management. Kirby also had a couple of opportunities to give his inexperienced kickers field goal attempts. These may hurt him down the line.
At 4-2 with Vandy coming to town, the fans are quickly forgetting their own preseason predictions of an average season. Forgotten is the new head coach and offensive coordinator, freshman QB, weak offensive line, defensive makeover, and two running backs returning from injury. Georgia may just beat Vandy and Florida, but it shouldn't come as a surprise if they don't.
Heisman race: all the candidates have a loss, with the exception of Deshaun Watson. Frontrunner Watson is only having a so so season. Should he defeat a resurging FSU team, the Clemson signalcaller should vault further ahead of the pack. Greg Ward lost. Louisville's QB is still the most spectacular. Baker Mayfield's Sooners beat Texas, but his season lacks luster. Could be between Watson and Stanford's McCaffrey, but the Cardinal are in a tailspin. Brent and Jesse called Chubb a Heisman contender, but even the hundred yards he gained weren't that impressive. Just as impressive have been Sony Michel and Brian Herrien (below). 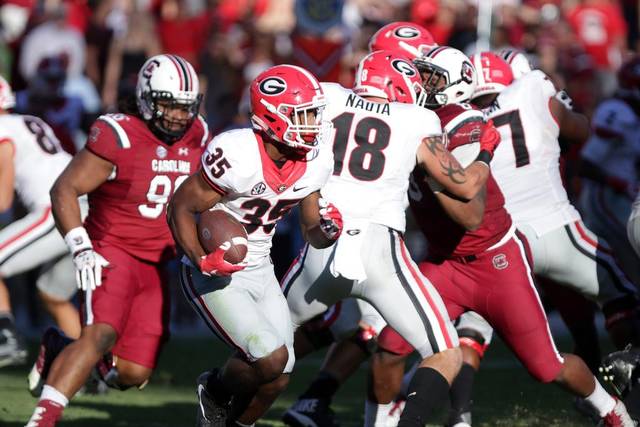 After winning in Denver, several media types say the Falcons are playing like one of the top teams in the league. After the Dawgs won and I saw the Birds' second half 20-3 lead, I kept my eye on the rest of the game. With Cam Newton out tonight, a win by Tampa could increase Atlanta's lead in the division. Long way to go.