Evil in the World

Another rock star attempted suicide, some guy from Sound Garden. Is it the state of the world that more and more people are killing themselves? Hopelessness and despair? There’s a hit TV Show 13 Reasons that deals with the topic, seemingly giving the act momentum among young people. I am concerned about some of the kids I know, and not sure if even if I’m doing everything possible to help, whether that will be enough. Like the evil world has a death grip on them. God is stronger, if these kids will only let Him into their lives. Sad times.
Got sad reading a humanist berating several Christians on social media. The Christians were only responding to his questions without being overbearing, just simply defending their faith. But the humanist refused to answer questions directed at him. It was obvious he just wanted to stir things up, twisting scriptures while ignoring others. It’s so easy to forget all the evil out in the world.
This past weekend I had a bad dream. Was in an old schoolhouse. Doors were locked but some bad people were just outside. We hid out of view. Bad guys broke in and found us. Someone was gonna get shot. I forced myself to wake up and think about something else. Not sure where that dream came from. I don’t watch many shows like that.
Our team in Augusta now works around the clock, meaning I get more calls after 4 pm than I used to. This means I get less done between four and six, and I wind up staying a little later. Monday we received our regular daily order over two hours late. We got it entered, but since several people had already gone home and there was less time to cut material and arrange trucks, so most of it didn’t deliver. Our warehouse did a great job of stepping in and making arrangements, but there’s a chance we’ll lose money on the transaction.
Anna took M supper at work, then stayed with him while he ate. When she got back we all ate grilled chicken, salad, and tortellini. Ceil turned on The Voice while I hit golf balls outside. Today is day six of my new exercise plan, and I’m 6 for 6. Back is a little sore. They say if you talk about it you do better. Sorry about that.
Tuesday at work we were talking about someone’s 18 year old skinny son and I told the story my friend of going from 95 pounds to 145 pounds in ten weeks.
After six straight days of workouts, Tuesday my back was hurting. Left work at six and got in my warm car, which felt so good. Didn’t roll down the window for a while, instead riding in the heat. Listened to the Braves game on the way home, and kept thinking up more driving tips. Got home and Anna was in the driveway painting a chest of drawers, that she’ll be taking back to Athens in August.
C cooked burgers, fries, and salad. Second straight week she cooked burgers. Not sure why – maybe Anna asked for it. I actually didn’t finish my burger. Saved it for lunch, along with some of the fries and salad. Watched The Middle and The Voice. I had boasted about the new show called “Good News” which they’ve been running two per week. Like many shows, after a strong, funny start Good News has lapsed into crude humor. Doubt I’ll be back.
I could’ve hit golf balls but decided to rest my back. Hoping to play the par three soon.
Tuesday night I dreamed I was showing a coworker where the closest QT was. She drove her black Firebird down a residential street near work, but wasn’t paying attention to lots of kids playing near the street. She just missed hitting a tiny little boy. Weird.
Worked til six Wednesday. Ceil was shopping so I grabbed Taco Bell. Drove home, changed clothes, then I met her in Roswell. Came home and hit golf balls. Anna was downtown until late, hanging out on the west side. M came home from work with a large potted plant. 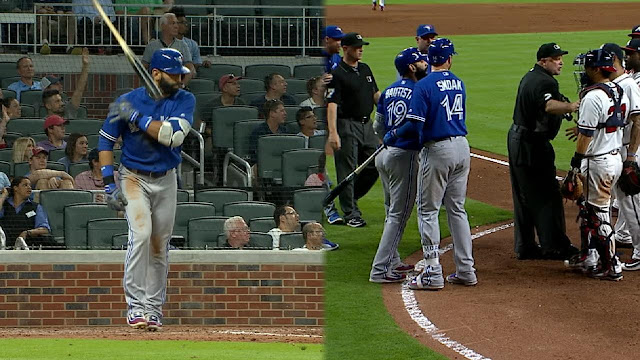 Entertaining Braves game. Toronto getting frustrated that they’re getting beat up. Not sure what all went into the bench clearing dust-ups. Slugger does a bat flip on a solo home run with his team down big. As the reliever said, with so many it’s not about winning or the team anymore. It’s about individuals showing off. The big money makes players swing for the fences as opposed to keeping innings going with singles, doubles, and walks. Baseball isn’t the base to base game it used to be. That old evil in the world again.
This morning someone’s musical ring-tone livened up the office for several seconds. Made me think back to elementary school carnivals, where they had Cake Walks and played Musical Chairs. Two great games that need to make a comeback. They go together with Piñatas and Pin the Tail on the Donkey. My favorite was Button Button Who’s got the Button.
Remember Jeff Yearwood? Yesterday he called me up and invited me to tonight’s Braves game. Didn’t realize he works near the new ballpark. Should be fun. Update tomorrow
Sales meeting tomorrow, with Mellow Mushroom for lunch. Trying to keep a low profile so I won’t re-volunteer to perform the song I wrote with this year’s slogan “Let Me See Your War Face.” Not many songs out there that deal with that, so I wrote my own.
Speaking of songs, this past Sunday during Louie’s sermon on fear he mentioned how singing praise songs helped deal with fear. Talked about how back in the old days the only way to do that was to memorize the hymns so you could sing them during the week. Eventually Christian records and tapes became more commonplace, but the selection was small. Not any more.
I am a member of an on line group sponsored by Campbells Soup that is always asking questions about those kind of all-in-one meal packs.
One time in college I got into a phase where every day I wore a red shirt and white pants, or something close. Might’ve only been for a week. Just to see if anyone would notice. No one did, of course. Often thought about wearing different shoes every day for a month. I could wear all black every day for several days.
I have no idea how I would’ve handled being in the military. I am good at following orders.