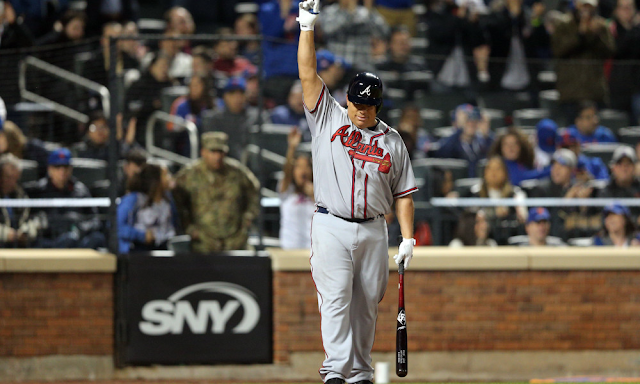 Differences between the Braves signing Bartolo Colon and the Hawks’ contract with Dwight Howard:

1. The Hawks were expecting Howard to carry them deeper in the playoffs.
2. The Braves only signed Colon to eat innings this year while the young guys matured in the minors.
3. Howard’s contract is a multi-year deal.
4. Colon’s contract is only for one year. If he does well they can trade him for prospects at the end of July. If he bombs they can release him.

The Hawks new GM said yesterday he would follow the Warriors strategy of avoiding bad contracts, a hint that they won’t offer Millsaps the big bucks.

Took LeBron 33 more playoff games to break Jordan’s scoring record. Someone said if LeBron won ten rings in eleven years that people would bed mouth him for the one year he didn't win. Bad example. LeBron is nowhere close to winning ten rings. No problem losing a game to Boston. I think I like Cleveland better than Boston with Isaiah Thomas.

But I'll be rooting for Golden State. Some people think LeBron tweaked his back. First time in his career with four first half fouls. The 680 guys thought LeBron created some drama (the loss, the fouls) to get his team to turn it up a notch. They didn’t need it against Boston, but they will against Golden State.

MJ was the fiercest competitor in NBA history, virtually willing his teams to championships. LeBron is a larger, stronger version of Jordan, perhaps a superior athlete but more easygoing. Not sure LeBron can win as many championships.

Will the Celtics keep Isaiah Thomas next year? As good as that kid Ball id, his father would be a huge distraction. Kid seems to have a good head on his shoulders, but he did make some typical 19-year old comments in his ESPN the Magazine article. When UCLA went overseas (China?) he hated the sightseeing tours, saying “I can see that stuff on the internet.”

Did you stay up for the end of the Braves game Tuesday night/Wednesday morning? It got over at 1:50 am. I didn’t, but the Braves won in a walk off by your new kid Adams. The Braves have won seven of their last nine. Snitker may have been so mad at the guy for blowing the Wednesday game that he left him in to take his lumps, saving all the other pitchers who had pitched until 2 am earlier that same morning.
Dansby had been given the day off but came in late as a defensive replacement after Peterson had made an error. Fans are expecting Swanson to field like Andrelton and not make rookie mistakes, which is unreasonable. This is only Dansby’s third year of pro ball. He will grow and learn from his mistakes, but some things take time. Everyone can’t be the best player in baseball right out of the gate. The fans who were calling for Swanson to be sent down to the minors are quiet now, since he came out of his slump.
Posted the picture earlier this week of Peachtree and Wesley from the early 1940’s (1943?). A temporary one lane bridge had been erected on Peachtree so cars on Wesley could pass under. I emailed the picture separately. The bridge was called a Tournapass. Have any memory of this? Landmarks in the photo look familiar, including the hill where St. Philips is, but you can’t see SPdL. Would’ve been great to see that old city auditorium. In Macon the old city auditorium still stands, restored after I had played youth basketball there in the 70’s. Also the old train station.
Red Lobster is good for adding on the pounds.

Hard to believe that Tracy Taylor's son is graduating from high school.

C is arranging flowers for a wedding Saturday and I’m tempted to drive to Chattanooga for their bobblehead game. I don’t need to, it will take up the entire day. My car’s electrical system acting up, but just a little. Messing with my book on CD reading program. Currently reading a book on Thomas Payne, from the American Revolution.

So many these days just accept what people say, without searching to determine whether it is true. A former contemporary of mine shared a young preacher’s blog post on social media, Guy was fed up with the traditional church. Some of his content was on the mark, but other points were spiteful, hateful, inconsistent, and outright un-Biblical. Many people agreed with the preacher, but a few pointed out the error of his ways. Made me wonder how Jesus would respond to the church should he come back today.
When I was growing up we attended Northminster Presbyterian in Macon for most of my elementary school years. Children’s choirs and youth choir. In high school I started attending Northside Christian Church, where I was baptized on Easter Sunday 1975. This August Northside is having a reunion, and I will try to attend.