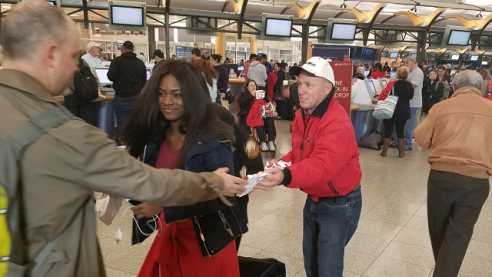 Interesting that CFA fed five thousand people at the airport. In fact they only started with five loaves of bread and three chickens.

Chickfila opens on Sunday to help out at the airport. The pictures showed them pulling wrapped sandwiches from the big black square stay-hot travel pouches, so they probably made them at a Hapeville location. Possibly the original Dwarf House on Virginia Avenue or even at corporate headquarters, which is just across 285 from the airport. The article said Dunkin Donuts also handed out donuts.

The airport thanked CFA, then the media reported what CFA did. CFA wasn’t tooting their own horn. But still people complain, like that every single person on every concourse and every stranded plane weren’t given free CFA. And that some are allergic to the peanut oil it’s fried in. Some complained they had to go without food for seven hours. Unless you are diabetic, that shouldn’t really be a problem for most people. An inconvenience for sure. Some people are gonna be unhappy no matter what you do. Thanks goodness the emergency wasn’t worse – a massive earthquake, the power grid going down for months, or a nuclear attack from South Korea.

Recently Twitter was tooting the horn of a corporate watchdog magazine that published a list of the 100 most customer friendly corporations, and CFA wasn’t on it. Starbucks and Apple made it, mostly because of the global warming initiatives they support. But I didn’t hear anything about Starbucks handing out coffee at the airport yesterday.

With nothing to bring for lunch today, I had a coworker pick up a CFA sandwich.

Of course, people were complaining about the Matt Kemp trade as well – a win/win for both teams. The Braves opened up a spot for rookie sensation Acuna, got a Gold Glove caliber backup SS/2B/OF, and one or two pitchers they didn’t have previously, while freely up money for 2019 that they previously didn’t have.

Tackling the ball instead of the runner - so dumb to try and cause a fumble. Maybe the second guy can do that, but the first guy better go for the tackle. Only exception might be when a guy is running for a touchdown. Inside the ten yard line the momentum is going to take the ballcarrier into the end zone anyway, so why no try and punch the ball out like the Bills Don Beebe did to the Cowboys Leon Lett in the Super Bowl so long ago.

But respected defensive coordinators like Dan Quinn and Kirby Smart teach tackling the ball. One of the key plays in this last Super Bowl was the fourth quarter Tom Brady pass that was batted into the air, and the Pats receiver made the miraculous catch while lying on the ground surrounded by three Falcons. Asked if the Falcon defenders should’ve knocked the ball down instead of going for the interception, Quinn said his defenders were taught to do what they did – go for the turnover. In the old days defensive backs were taught to bat the ball down.

In 2015 Auburn came back to beat Georgia on the miraculous pass that the UGA defender went for the interception instead of knocking the ball down. Instead the ball bounced off the defenders hands further downfield – right into the hands of the Auburn receiver for the game-winning touchdown.

Another close lucky win for the Falcons. They may be living right, but it would be no surprise to anyone who’s paying attention – the Falcons could lose to both the Saints in New Orleans as well as the Panthers in the season finale. The defensive linemen get worn down and are too tired at the end of the game. That’s something else that’s changed about football. Linemen used to weigh 250-270 pounds. Now they’re 300 pounds. Harder to maintain conditioning at that weight.

Linebackers are a chiseled 240-250 pounds, faster and stronger than the Nobis’s and Butkis’s of yesteryear. They hit harder, causing more injuries to themselves and others.

Speaking of fumbles, last night Devonte Freeman was gaining ten yards at a pop (because . Seems like players play harder on Monday Night Football, thinking their peers are watching. I bet most NFL players don’t watch MNF, TNF, or SNF. Instead they’re out partying, playing video games, and studying for their next game. But at least twice Freeman fumbled – once just before tumbling into the end zone for a touchdown. That had to kill him, and then a couple of possessions later he fumbled again.

Left work at six and stopped by North Point Mall. Didn’t find what I was looking for. Got four more stores to check.

Mexican for dinner last night. Both Anna and Matthew were there. M was strumming on his guitar, and we all played various songs we thought about: Amie by Pure Prairie League, Secret Agent Man, the Beach Boys, and others. Didn’t finish up until 9 pm. Flipped back and forth between the game and Barney’s favorite movie: You’ve Got Mail (he knows all the scenes the dog is in).

Sunday School Christmas party tonight, not too far from our house.