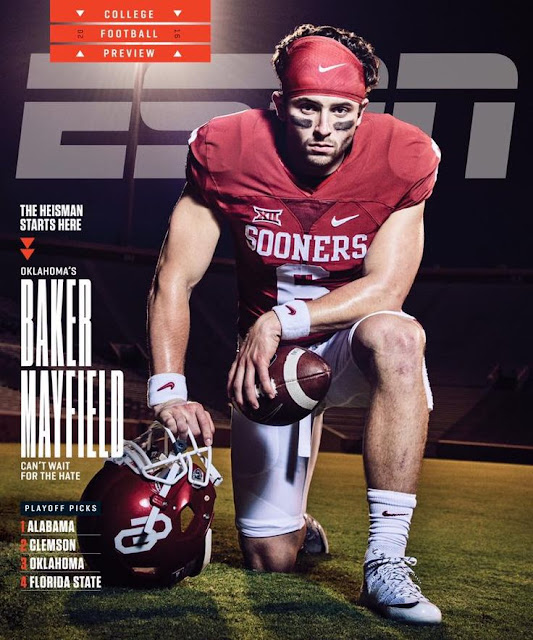 Who is going to win the Heisman? Despite his misdeeds, I think Baker Mayfield will win. If not for this season, then as a career achievement. He’s led the nation in QB rating for two straight years. Last year he led the nation in ESPN’s Total QB Rating, and this year is a close second. Lamar Jackson ranks third this year, and the other three playoff QB’s are also in the top eight: (5) UGA’s Fromm, (6) Bama’s Hurts, and (8) Clemson’s Bryant.

Mayfield is the seventh player in history to finish in the top five three times, along with Glenn Davis, Doc Blanchard, Doak Walker, Herschel Walker, and Tim Tebow. To me those seven are among the top 25 players in college history, if not the top ten.

Jackson won last year after averaging 393 yards per game. This year he has even better numbers: 411 total yards per game and 42 total touchdowns. Mayfield threw for 41.

Stanford’s Bryce Love averaged 164 yards rushing per game. Penn State’s Saquon Barkley was second in the nation with 179 all-purpose yards per game, but fell off the pace in November after a strong start.

Kirby Smart was named SEC coach of the year. A preseason ranking in Athlon Sports ranked him as the 65th best, ten spots behind South Carolina’s Will Muschamp, 25 behind former Texas A&M coach Kevin Sumlin, 35 behind former Tennessee coach Butch Jones, and 38 behind former Arkansas coach Bret Bielema. In fact, at least nine of Georgia’s wins were over teams with a head coach ranked higher than Smart. Dumb.

UGA QB Jake Fromm was named the SEC freshman of the year.

I need to work on my bowl picks. It will probably be next week before I get them to you.

It’s Drew Kelly’s fault that Wofford beat Tech. Usually he roots for Tech but last night he was rooting for Wofford. I would rather Tech beat Wofford than Duke or UGA. Win the games you are supposed to win. These basketball players think they’re big shots because they’re playing at an ACC school and they can’t even make a basket or beat Wofford. I am not impressed.

Basketball players who can’t make a basket in the game. Reminds me of the beginning of the movie Bull Durham. Veteran catcher Kevin Cosner is brought in to groom wild rookie Tim Robbins. Cosner goes to the bar to meet Robbins, who picks a fight with Cosner. They go outside. Instead of throwing a punch, Cosner pulls out a baseball and tells Robbins to hit in the chest with a pitch from short range. Robbins rares back and lets fly – but doesn’t come anywhere near Cosner. Breaks a window instead. 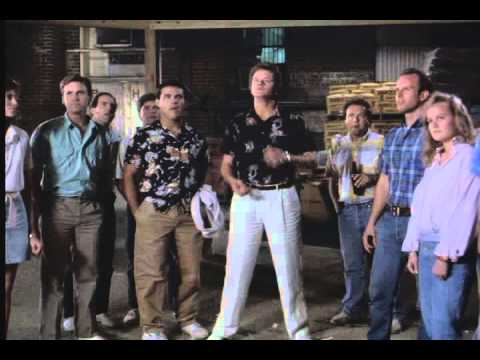 I worked until 8 pm Tuesday night. Still more to do. Got home and fixed quesadillas on the panini press. Watched a Seinfeld special on Netflix.

Wednesday: eight people are out of the office, including three senior team members. Emergency number one started as soon as I walked in. M drove my car to Augusta, so I’ve driving his 1996 Buick Park Avenue. Rides smooth. Worked past 6:45 before driving M’s big car home. C wanted to go out to eat so we split a chicken sandwich at Moxie Burger. Watched a Sandra Bulloch / Hugh Grant movie.

Thursday: slept late this morning, then I had to stop by Kroger. Running late. Then after having been stopped at a red light yielding to all the cars with the green light, traffic on Holcomb Bridge finally starting moving again when our side turned green. Then a $50,000.00 Jeep comes flying around the turn lane, making a right on red without stopping first. He accelerated, then got mad when I didn’t hit my brakes to let him in. He started honking and flashing his lights.

M is coming home from Augusta today. Good thing he’s not coming tomorrow in the snow. You know how I love the snow.