Friday afternoon around 12:30 I was on the phone with my boss, talking about the snow. I had hoped to work until 3:30 to get in eight hours, but not long after I got off the phone I realized I didn’t want another six hour trip home in gridlock traffic. So I left work at 12:50, cleaned the snow off my windows, and headed out. Couldn’t turn left on Peachtree Industrial so I made a right, then a U turn. Southbound PIB was bad all the way to 285 (8 miles). Spaulding was gridlocked too. I pulled into the first gas station to fill up. While the pump was running I got warm clothes, hats, and gloves out of the trunk. Standing by the pump I was cold, then I realized water was trickling down on my sneaker, getting it all wet.

Super slow on Medlock Bridge, but better on Peachtree Corners Circle. Was able to turn back onto Spaulding without stopping. Holcomb Bridge was slow like rush hour, but it moved and opened up after Nesbit Ferry. Eves and Riverside weren’t a problem, but then the school buses slowed things down on old Alabama and Riverside. Got home at three after two hours on the road.

On the way I took several work calls about an order for a new customer. Was on the phone with Augusta, Tampa, Jacksonville, and Little Rock. Of course none of them had snow. At home I logged onto my computer and worked. I’d forgotten about the late afternoon order until I saw the email. Wasn’t sure if anyone would be there to work the order, but I got it entered.

M had come home from work but later left to hang with a friend. He spent the night. C was baking cookies for school. Around 5:30 I nodded off. Barney seemed to want to go outside more than usual. Watched three Hallmark Channel movies. I was going to bed at 11 pm when #2 went off, but C watched to watch another one, so I slept on the couch until it was over.

Saturday morning I was cleaning upstairs. Barney came upstairs and jumped on the bed, and we played around a little. Later I found blood on the bed: a cyst on his back had burst. C had to doctor it up, and wound up stretching tape all around his hindsection as a bandage. He didn’t seem to mind. I did some laundry and fixed quesadillas, cleared out emails and took a nap. Ceil ran errands early in the afternoon. Will and Okie were up in North Georgia. A bunch of W’s friends went up for Charles Norman’s bachelor party: playing in the snow and stuff. The wedding is in February.

At four we left out for our dinner with my coworkers. The roads were ok, but to be safe I took highway 9 to Alpharetta, then Old Milton Parkway all the way to Medlock Bridge. Arrived right at 5 pm, but half the group was already there. Viande Rouge had great food. It’s located just northwest of the Old Milton / Medlock Bridge intersection in Duluth. We had eight couples plus Rachel for dinner at two tables back to back. C had a glass of red wine, I had my usual Diet Coke. 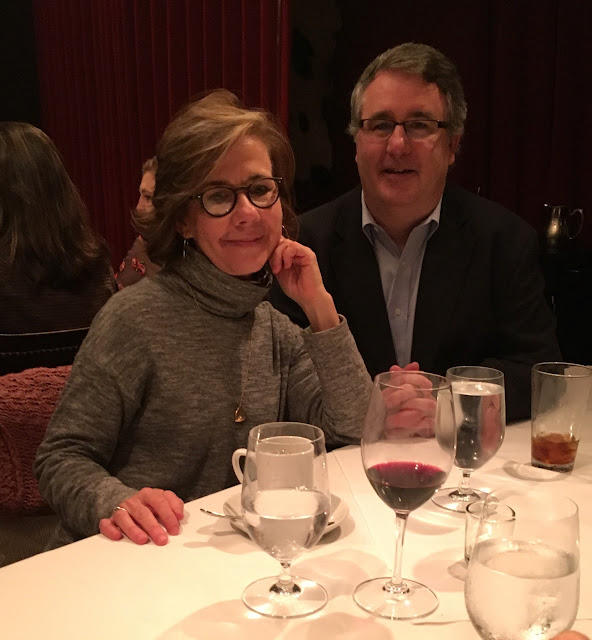 The huge braised meatballs would melt in your mouth. Served in creamy white polenta sauce chasseur. The other appetizer was warm spicy lobster dip on French bread crostini. I had two or three meatballs and two servings of the lobster dip.

I ordered a tomato salad but was pleased when they brought me a baby iceberg wedge instead. The tomato salad was just three large slices of tomato with a large ball of burrata cheese on top, in a balsamic dressing.  The iceberg wedge had grape tomatoes, Berkshire bacon, maytag bleu cheese, housemade ranch, and grilled baguettes.

Shane was worried he wouldn’t get the creamed corn, but we’d ordered it in advance. Alex’s wife liked the sweet potato soufflé, as did I. Many liked the wood grilled asparagus. I passed on it, as well as the popular Janine’s mashed potatoes.

Ceil ordered the delicious 14 ounce bone in filet mignon, and took a large portion home. Rodney and I got the special, two slices of steak with a crabcake in between, the whole thing baked inside a thin pastry shell. Delicious.

For dessert the chefs cooked bananas foster at our table. C got chocolate crème pie and coffee. I got coconut crème pie. We both took part of our desserts home. Left the restaurant right at 8 pm. Dinner hadn’t really seemed rushed, but we took up the entire three hour time slot. Took the same route home. Hallmark Channel.

Small crowd in Sunday School, but it was a good lesson. Worship was a baptism service, lots of teenagers from their weekend retreat. Leftovers for lunch – I made a sandwich on the panini press. Ceil ran more errands so I napped and watched football. Cleaned the snow off my car so I’d be ready to go to work. Later I played on my laptop, fixed another sandwich, and watched The Middle and more Hallmark. Ceil made cookies for her art class: 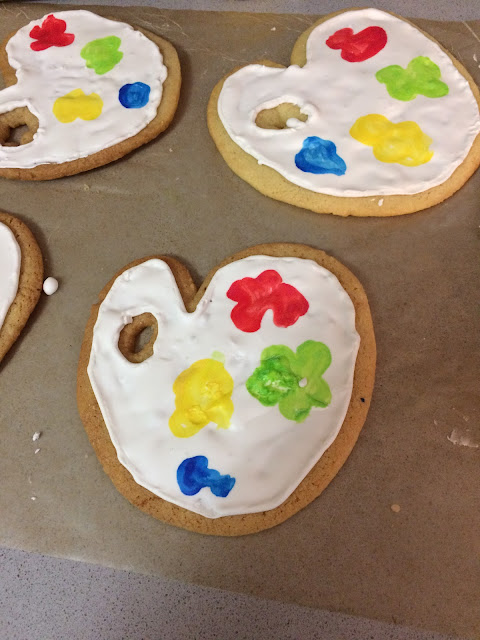 This morning I got an earlier start. Went out and started my car so it could warm up. Went a “safer” route to work, so it took a little longer. Several coworkers had stories of long trips home from the Nashville sales meeting. Took one guy eleven hours.

My “pulled muscle” isn’t getting any better and I’m afraid it’s a hernia. Gotta figure out what doctor to go to.