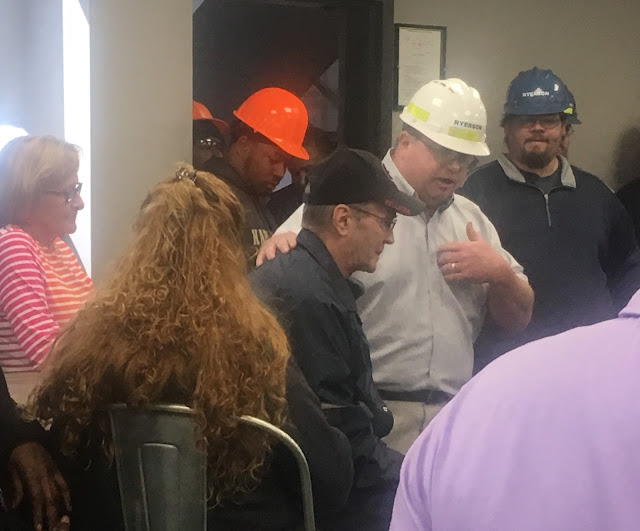 Heartwarming scene in the breakroom yesterday: Johnny’s retirement reception. He’s been with the company 48 years. He started as a teenager, and was hoping to make fifty years. Worked in our old muffler tube-bending operation in the 70’s, on the tube mill, and later on the will call counter – a tough job. In 1977 he took 17 year old Chris under his wing, and made such an impression on Chris that he wanted to stay with the company. Chris and I played softball with Johnny in the early 90’s. Now Chris is the CFO, with almost 40 years with the company.

Johnny was diagnosed with cancer, and the treatments caused him to drop from over 200 down to 125 pounds. He’s been doing better, and has gotten back up to 165 pounds. He’d wanted to make it to 50 years with the company, but it just didn’t work out. Today the break room was packed with plant and office employees to say goodbye. Several big tough plant guys gave heartfelt speeches, tearing up and using words you normally don’t hear from the plant guys, like “I love you” and “brother.” A touching scene rarely seen these days in corporate America.

The best speech came from Robert, the shop foreman / Falcons fan who'd ribbed me after my Baldwin retirement speech. Robert’s speech, without notes, was much better than mine. Not a dry eye in the place. For years Johnny had worn his hair long until it fell out during chemo, though now it’s starting to grow back. Robert, always with military short hair, told Johnny he liked his new look.
We do have (1) Netflix and (2) Hulu and (3) Comcast Xfinity On Demand and (4) Amazon Prime TV and (5) Apple TV, but don’t watch them enough to justify having them all, now that we’ve watched all 8 seasons of Gilmore Girls. There are high-tech ways to download TV shows without having cable or satellite, like Rooco TV and stuff like that. We just want to make sure we can see sports.

My former roommate Tom is making a presentation in Cooperstown in May. It’s about ballparks as a sacred place, how people still gather years later at the site of old ballparks to commemorate events like Mazeroski’s HR. I told him some of the Hot Stove guys gather at AFC on the day Sid slid. These days Tom is a college professor in Kentucky. He’s attended several Hall of Fame inductions. I still kick myself for not tagging along on his mid-80’s road trip to Yankee Stadium and Fenway Park. Tom wants to write a book about baseball travel as a religious pilgrimage.

I’m not too much of an expert, but here are some churches in Athens that seem to attract a lot of students…
A. FBC Watkinsville…my friend Catherine works in the college ministry there.
B. Athens Church…an offshoot of North Point Community Church.
C. Grace Athens…my daughter is an intern there. Meets in the UGA Chapel. Smaller, averages 350 each week.
D. Wesley Freshly…the on campus Wesley Foundation (Methodist) places freshmen in small groups, led by an upperclassman. My daughter had been a Freshly leader in the past.

Busy day at work Tuesday but I got a decent amount done. Late in the day I discovered several problems that continued to rear their head the next day. 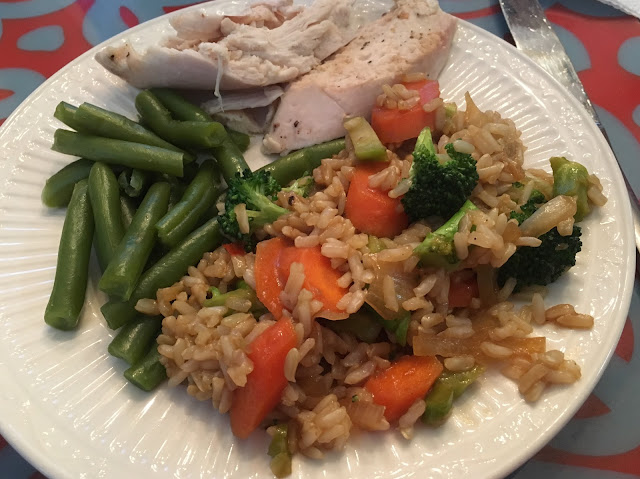 Left work at six and drove straight home. Will and Matthew joined us for dinner. Ceil baked a chicken and cooked fried rice and vegetables. Also fruit and green beans. Afterward Ceil had artwork to do for her class and Will had to study. I did the dishes. Didn’t finish until after nine. Played a little on my laptop then went to bed.

Stopped by Chickfila Wednesday morning for a chicken biscuit.

Tuesday I helped a guy from upstairs with an order. He was talking about how bright and upbeat our downstairs department was. This morning he turned in his notice. He joins a long list of employees who’ve left that department over the past couple of years by transfer, retirement, or moving to another company: Bill, Sandra, Justin, Aaron, Sue, two Tim’s, Eric, Brad, McKenna, Gloria, Steve, Peggy, Greg, James, another inside salesperson, Darryl, Wanda, and me. Plus Amanda just had a baby. That’s 20 people. Goodness.

I got Will’s Masters report. Here are some of the highlights:

He drove Condoleezza Rice to her car. The former secretary of state’s favorite hole to play is the par four 11th.

He opened the door of a car and Peyton Manning got out. Manning and his wife were there with another couple – her best friend from college and her husband. The wives had attended Virginia together, and Peyton and the friend’s husband to be (a student at UGA) forged a friendship since they were the only non-UVA people around. The husband is now an executive at Chickfila.

Will drove ESPN golf commentator (and former PGA player) Andy North and his wife to their car – three times during the week.

He helped former PGA player Lee Elder and his wife ship their purchases back to their homes in California and Miami.

Friday evening Will drove Augusta National member Jeff Knox and his son back to their car. Knox had just learned he would be playing again as a non-competing marker on Saturday morning. His son asked if he was nervous but Knox said no, but the son could be nervous for him. The younger Knox had played on the University of Alabama golf team with Justin Thomas. 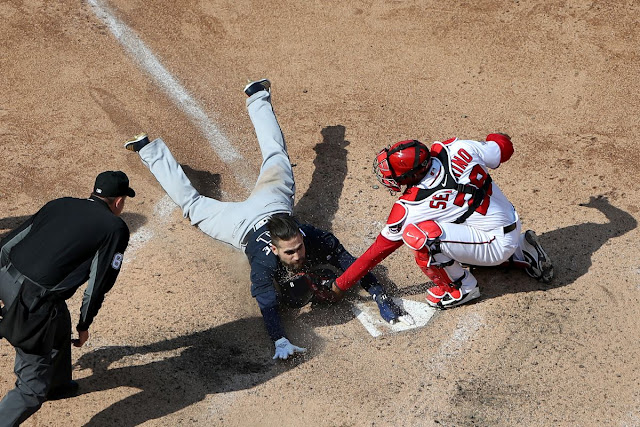 Sounded like the Braves weren’t happy with the replay. Lane Adams made a good point: don’t tell the replay official what the call was. Let them decide for themselves. If the video is still inconclusive, then go with the original call. At Braves games there’s special music that plays during replays. Maybe they should give away prizes during the delays.

Stopped by RaceTrac on the way home Wednesday for gas. Decided to go inside and get a drink as a treat. Got my usual Vitamin Water Zero Lemonade with a splash of Gatorade and put on the top. At the register the guy did a double take and said “Is that water?” I didn’t think much about it. Went out to the car, put on my seatbelt, and drove off – then I took my first sip. Water with a splash of Gatorade. I didn’t feel like going back inside. My bad.

Dinner with Will again. More Masters stories. On the Sunday before the Masters the members get to play with past champions. Will saw Bubba Watson and his wife playing with Condi Rice. Later he saw Gary Player. That same Sunday Will saw Braves CEO Terry McGuirk. The Braves had lost in extra innings the previous day, so Will quipped “Tough loss last night” and McGuirk agreed. Supposedly another Augusta National member (a Mets fan) was giving McGuirk a hard time.

After supper I helped Will with his cover letter, to send out with resumes. Matthew was working. When he got home he came upstairs to tell us about his day. In the employee meeting he’d been nominated for employee of the month. He also had a good doctor visit yesterday.