These days some make fun of the Masters for their antiquated positions, outlawing phones, cameras, and allegedly the term “dilly dilly.” No mention of this on the pairing sheet Ceil brought back from the Masters, that does say “Although cheering and positive patron responses to great play are encouraged, unsolicited or consistent calls from the gallery are prohibited.” Yet sports fans flock to Augusta National and marvel at the perfection of the grounds, and everything affiliated with the Masters – because of the very guidelines so many mock.

Printed on the pairing sheet is a quote from Masters founder Bobby Jones: “In golf, customs of etiquette and decorum are just as important as rules governing play/ It is appropriate for spectators to applaud successful strokes in proportion to difficulty but excessive demonstrations by a player or his partisans are not proper because of the possible effect upon other competitors.”

And: “Most distressing to those who love the game of golf is the applauding or cheering of misplays or misfortunes of a player. Such occurrences have been rare at the Masters but we must eliminate them entirely if our patrons are to continue to merit their reputation as the most knowledgeable and considerate in the world.”

Or as someone put it: ”Leave that crap at the Phoenix Waste Management Open.”

Tuesday night new Phillies manager Gabe Kapler ran out of position players by the eighth inning. He had relief pitchers warming up in the first inning, made a double switch almost every time he made a pitching change, and delayed the game making decisions while consulting with his coaching staff. The Phillies hit into three or four double plays, including one with no outs by the pitcher after he whiffed on a bunt attempt. Yet Philly won in extra innings, in part due to numerous walks by Braves relievers.

The Phillies manager - worst ever? It is his first month. These days they’re giving the managerial jobs to former players who’ve never managed before, like the Yankees Aaron Boone. Used to be managers spent years managing in the minor leagues so they’d get to see as many different situations as possible. Stengel, Lasorda, Cox, etc.

Pitching is the Braves weakness. That’s why they’ve been trading for so many young pitchers the past few years, because not all of them turn out to be major league material. All the fans who thought they needed to trade for position players aren’t saying that any more, now that the Braves are leading baseball in most runs scored. Plus they have more hitters in the minor leagues: Acuna, Johan Camargo, 3B Austin Riley, etc. Ozzie Albies has gotten off the a better start than Mike Trout or Bryce Harper.

Bad Wednesday for the Braves: first the pitcher pulls his hamstring then Freddie gets hit in the hand again – exactly like last year. At least there are several replacements ready: Tyler Flowers can play first. Also Jose Bautista, who they just signed yesterday. Johan Camargo was just called up (below, in his new Stripers uni). Johan or Flaherty could play first. Flaherty is leading the league in hitting. Preston Tucker could play first. They could call up Ronald Acuna to take Tucker’s place in the outfield, but Acuna is only hitting a buck eighty. And the Braves called up Lucas Sims, who can take the injured pitcher Sanchez’s spot. 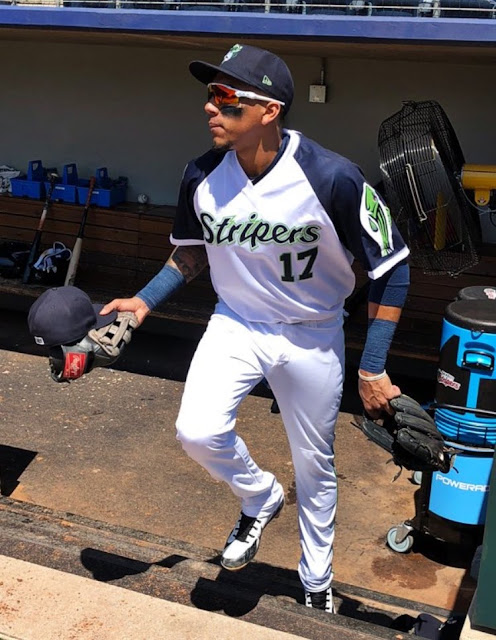 Wednesday morning Mack brought in CFA biscuits. Will said at hospitals the vendors often cater lunches. After work Will hung out with Joel and studied, then came home to eat a late supper with us: BBQ chicken, broccoli, salad, and scalloped potatoes. Watched the Braves. M came home from work and cooked himself another veggie burger. Will and I were eating on M’s cheese dip.

Couldn’t sleep last night because I had two caffeinated beverages yesterday. Someone left some V8 green tea strawberry lemonade “energy” drinks in the break room, but the only thing energy about it is the caffeine – as much as a cup of coffee. Also I have a stash of chocolate covered coffee beans at my desk, but I try to only eat one or two a day so they will last.