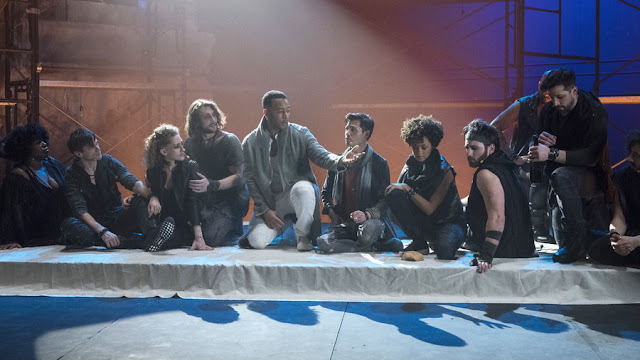 Sunday night I watched the live performance of Jesus Christ Superstar, which stuck closely to the original soundtrack. Better than the movie. Instead of the hippies in the 1970’s productions the cast was mostly multi-ethnic millennials. John Legend did a good job portraying a strong but not too strong Jesus. 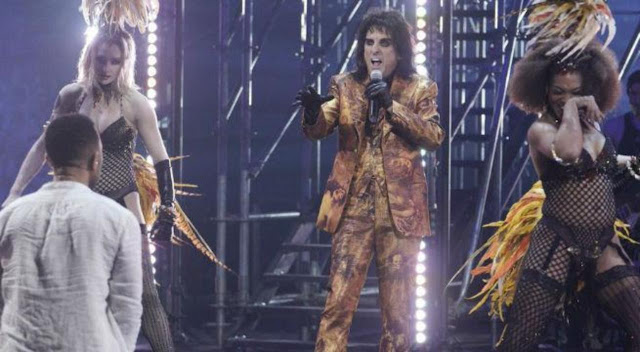 Alice Cooper, who boldly testifies how Christ saved him from his life as a drug addict, stole the show as King Herod. For the most part Cooper played himself, carrying a skull-topped cane, rocking an orange suit and shoes, dropping the mic at the end, then letting members of the audience kiss his ring. 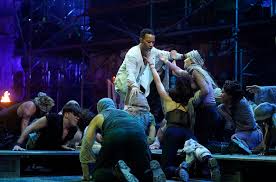 When Jesus healed the sick it looked like a zombie invasion. Hamilton’s Brandon Victor Dixon also did an excellent job as Judas. The audience got into Jesus’ triumphant entry into Jerusalem; cheering, waving, and singing along with the ensemble as John Legend egged them on. The performance was a big hit on social media, hopefully exposing millions of non-Christians to the Gospel.

Busy weekend. Friday afternoon at work coworker Chris was talking about the Chuy’s Happy Hour Nacho Bar, so I decided to check it out on the way home. Big mistake. Usually I drink Coke Zero or Diet Coke, but decided to have an adult beverage instead. The strawberry drink was ok, but I should’ve stuck to cola.

The nacho bar was bear bones: salsa (too spicy), ground beef, nacho cheese, refried beans, and chips. I passed on the salsa and beans, and was happy with the beef and cheese. But the chips would easily break, so I’d have to eat most of it with a fork. Would’ve been nice to have a wider variety of toppings, but beggars can’t be choosers. The service was excellent, but for what I spent for the drink I should’ve ordered a regular meal.

Stopped by Kroger and two thrift stores on the way home. Watched the Braves and played on my laptop.

Saturday morning I drove to Macon. Traffic was bad through downtown (no problems passing SunTrust Park – despite construction. South of the airport traffic again ground to a halt. My GPS routed my onto unfamiliar backroads, where I ran a red light and had to slam on my brakes to avoid a collision. Traffic was heavy the whole way but sped up south of Locust Gove. Then south of Forsyth due to a crash four lanes narrowed down to two. When I arrived I wanted to kiss the ground.

Watched Loyola lose to Michigan. Loyola played well in the first half, then couldn’t do anything right in the second. I like that German kid for Michigan, who had to leap over the scorer’s table, stepping on announcer Bill Rafferty’s glasses in the process. But due to the legions of Michigan fans on the planet, I plan on rooting for Villanova in the finals.

Ate at Fazoli’s for the first time in years. Ordered the sampler platter with spaghetti, lasagna, fettuccini, and penni pasta. The lasagna was great (I split it with my dad) but the rest was mostly pasta with a moderate amount of sauce. The breadsticks were fabulous – I shouldn’t have eaten two. I had some of my dad’s toasted turkey sub sandwich, which was messy but good. My mom ate a big bowl of chicken soup.

Left Macon after the game, at 8:30. Northbound traffic slowed at McDonough. My GPS routed me off the interstate, and while stopped in the long line of exiting cars I noticed (1) my car was running hot and (2) the oil light was blinking. I pulled into QuikTrip and added a quart of oil. It didn’t take much water, and didn’t give my trouble the rest of the way. Arrived home at 10:45. Villanova had a comfortable lead, so I watched a replay of the Braves big win. Had I taken 75 out of downtown I would’ve passed the stadium right when they were shooting off the fireworks for Lane Adams’ 8th inning home run.

For Sunday lunch I made cheese quesadillas. Cleaned some upstairs and did several loads of laundry. While folding clothes I watched two movies: Next, with Nicolas Cage was pretty good. John Cusack’s “The Numbers Station” was darker and harder to get into.

Realized my lawnmower wasn’t starting because I’d put last year’s bad gas it in. I drained the gas tank and put the good gas in and it started on the first pull. Cut the grass, did some raking, blew the driveway and deck, and positioned the dead Christmas tree down the hill near the creek, to prevent erosion. By then I could hardly walk. Ate a PB&J for supper.