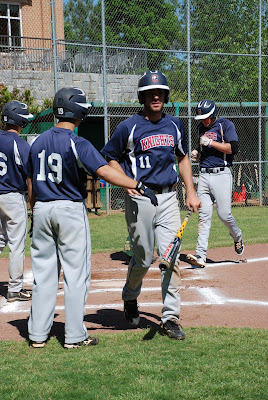 Tanner’s seventh-inning double to deep left-center drove in the game’s tying and winning runs. On the mound he only allowed one run over four innings, leading Crown to a well-played seven inning victory late Tuesday night. The 5-3 win avenges an earlier 7-4 loss to the talented Sandy Plains Threshers.

With two runs having already scored In the fourth, Tanner worked out of a bases-loaded nobody out situation without allowing a run. The Threshers assembled five straight hits, but with the infield in Tanner coaxed a dangerous hitter into a 4-2 force out at home plate. When another good hitter struck out, the runner on third tried to score on a passed ball. Patrick quickly tossed to Tanner to begin a rundown, and speedy Smith eventually chased down the wayward runner to end the inning.

A similar play happened in the sixth. Crown had battled back to tie the game in the top of the inning on Charlie’s successful suicide squeeze. regained the lead on a double into the right-field corner. Tanner had already recorded the first two outs of the inning; deftly snagging a line drive hit right back to him, then artfully fielding a bunt and tagging out the batter. But when another runner tried to score on a passed ball, Nathan had plenty of time to toss back to Tanner. As the runner slid in, Smith tagged him and rolled into foul territory, avoiding a collision.

The play swung momentum back to the Crown dugout. In the decisive seventh Jackson and Will walked, then stole their way into scoring position. Then Tanner launched a 1-2 pitch deep into the night. At first Will tagged up at second, but he still had plenty of time to score the go-ahead run. Patrick, running for Tanner, scored an insurance run on Silas’ solid single through the hole into right.

Needing three outs for the win, Tanner got the first two outs on strikeouts, giving him five in four innings. The last batter grounded out to Will at short, and the Knights had their win.

The always-hustling Patrick provided the play of the night. Leading off the fifth, the catcher laid down a perfect drag bunt on the very first pitch of the inning. As he raced to first the pitcher’s throw sailed to Patrick’s right, past the first-baseman and down the right-field line. Patrick wheeled and raced to second. He rounded the bag at full speed, looking for guidance from Coach Rosemond in the third base coach’s box. I’m not sure what Chuck was doing, but Patrick continued on, quizzically spreading his arms in bewilderment. Donovan slid into third just as the throw sailed past. As the crowd cheered, Patrick leapt up and raced home.

Tanner had help, at the plate, on the mound, and in the field. Highlights included:

Charlie W: caught everything hit to him in the outfield.

Hunter: twice robbed of hits, by the shortstop and first-baseman.

: in addition to his run, he was robbed of a hit by the third-baseman.

Nate: Walked and scored on Charlie V’s squeeze. Robbed of a hit by centerfielder’s running catch.

Peyton: made a nice play in right, holding the batter to a single.

Silas: added an opposite-field double to deep left-center to his RBI single.

After the 6 pm game ran long, first pitch for the Crown game was delayed until 8:22 pm. Crown played errorless ball. Four Thresher errors (three on Patrick’s bunt) resulted in two unearned Crown runs. Since the game was so well played, the teams were able to get in all seven innings in two hours. Both teams’ crowds were animated and into the game: there were several plays where one crowd was cheering until the play turned in the other team’s favor…then the other crowd would start cheering.

A moment of levity during the climatic seventh inning: after a walk put the crucial tying run on first, the SP relief pitcher called time, put down his cap and mitt, and pulled off his jersey and undershirt. Both crowds laughed as the shirtless pitcher struggled to separate jersey from undershirt. On deck, Will considered hollering “That’s not going to distract me!”

While I recap most all of Will’s highlights on this blog (for the benefit of his distant grandparents), I only forward recaps of Crown’s most exciting games to Facebook.

Email ThisBlogThis!Share to TwitterShare to FacebookShare to Pinterest
Labels: baseball, recap, Will