A Statute on Statues?

One of the great things about Washington DC is all the monuments and statues. They are located not just on the national mall and in the capitol building, but throughout the city in various parks and street corners. There are several statues adorning the grounds of the Georgia state capitol, and three outside Turner Field: Hank Aaron, Ty Cobb, and Phil Niekro. The Braves have also erected monuments honoring each of the retired numbers, and markers for each member of the Braves Hall of Fame.

Monday afternoon 680’s Chuck Oliver was discussing statues on college campuses. He thought any coach winning a national college football championship deserved a statue. That’s what the University of Alabama has decided as well, with five statues so far. Perhaps the best policy is to wait until the coach retires on moves on before erecting the statue, to make sure he doesn’t disgrace the school. Former UGA president Michael Adams decreed that Vince Dooley’s statue be located far away from Sanford Stadium, past the athletic fields at the edge of the campus. Sour grapes? Statues need to be where fans attending games can see them.

Heisman Trophy winners also deserve a statue. Stadiums have such large perimeters that numerous statues can be spaced out far enough away so as to not seem crowded. The University of South Carolina is spending $100,000 on a statue of Heisman Trophy winner George Rogers. Good for them. But Gene Sapakoff of the Charleston Post and Courier thinks the money would be better spent elsewhere: lower ticket prices, scholarships, etc. He worries, that like so many other things in sports, that statue building will explode across the state and turn South Carolina into another Alabama. Clemson will surely counter with statues of their own (The Fridge’s huge statue would cost millions) and smaller SC schools, with smaller budgets, would be caught up in the trend. Does a law need to be enacted to limit the overuse of these monuments? Sapakoff makes a good point, though he’s in the minority in our sports-crazed society. 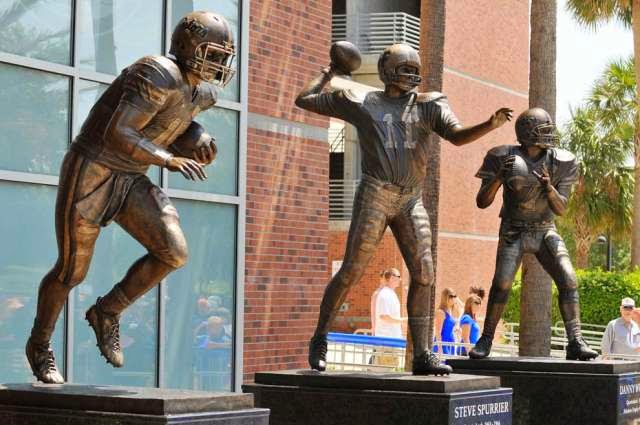 An Athens artist has begun work on statues of former Georgia greats Frank Sinkwich, Charlie Trippi, and Herschel Walker, but needs more money to be raised to finish the project. Florida honored its three Heisman winners with statues: Spurrier, Wuerfful, and Tebow (above). Fans are welcomed to Georgia Tech’s Grant Field by statues of former coaches Bobby Dodd and John Heisman (below). Tech has not sired a Heisman winner, but boasts two runner-ups and several members of the college football hall of fame (which soon will be located just a few blocks south of the Tech campus, downtown next to Centennial Olympic Park). 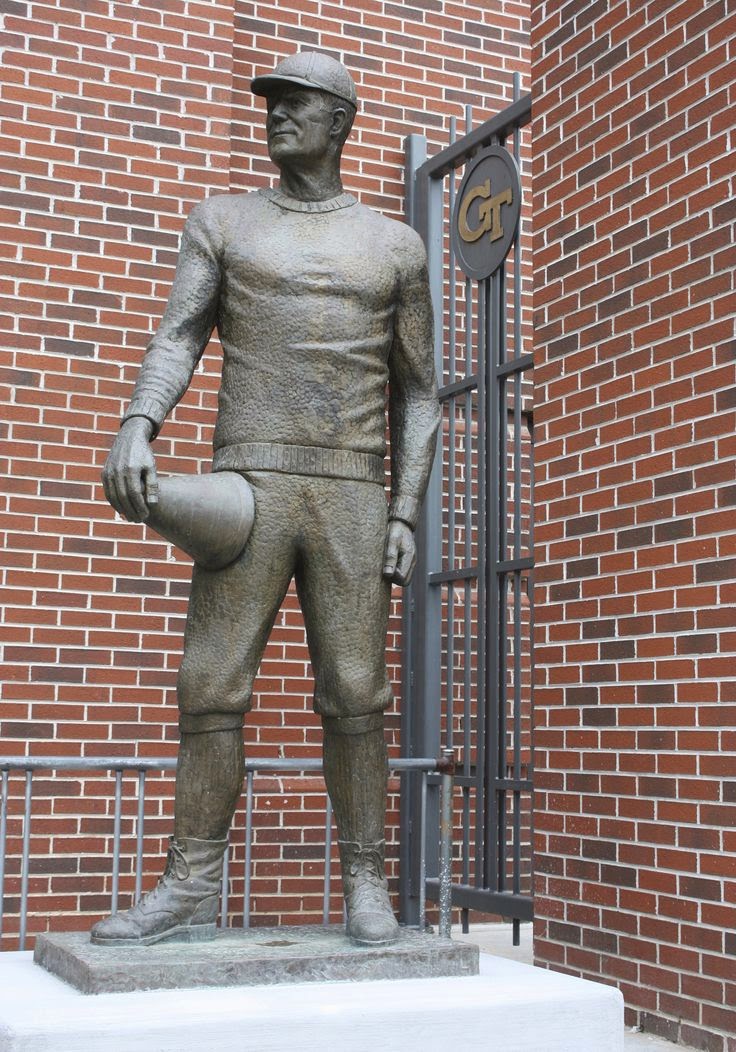 Auburn could do well to erect statues of Heisman winners Pat Sullivan and Bo Jackson, though any bronze statue of Cam Newton would be tarnished by the numerous NCAA investigations into his recruitment. Southern Cal has the same problem with disgraced Heisman winners OJ Simpson and Reggie Bush. Instead perhaps a display case can be filled with bobblehead likenesses of all head coaches and All-Americans.

More 680: I am liking the addition of Chris Dimino to the morning show. As a sports expert, he does not tolerate Perry’s blabbering. Dimino will stop mid-sentence to call out Perry, saying “don’t give me that…” or “don’t roll your eyes”. This has given Christopher Rude the courage to speak out against Perry as well, leaving Laurentino somewhat speechless at times. This two against one setup makes the show much more pleasant listening.